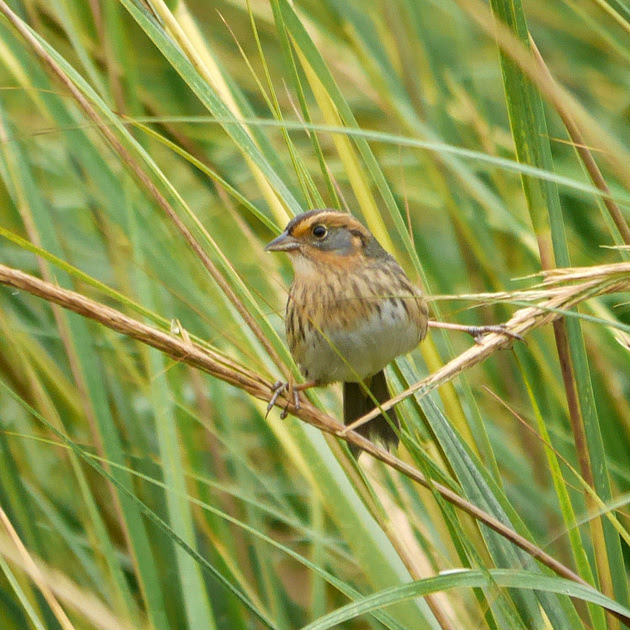 At last we meet, Mr. Nelson!
I've mentioned the term "nemesis bird" a few times. This is a species that a birder has had several, or many, opportunities to see and has failed every time. I'm still not sure I'm a good enough bider to really have a nemesis bird, but I used to consider the Connecticut Warbler mine. Once I saw one, I shifted my nemesisitude to the Nelson's Sparrow.

Nelson's Sparrow is a member of the genus Ammodramus, a scarce and secretive group of grassland and mash sparrows that usually have some orange on their face and/or breast. Nelson's is a sparrow of salt marshes--it used to be considered the same species as the endangered Saltmarsh Sparrow (the combined species was called "Sharp-Tailed Sparrow", and some older books call this bird "Nelson's Sharp-Tailed Sparrow").

Nelson's Sparrow is rare in this area, but it does occur in migration and in the Fall a few show up every year in the little salt marsh on the northern edge of Randall's Island, at the eastern end of the Bronx Kill. So when on the morning of October 1 there were reports from there that several Nelson's and a possible Saltmarsh Sparrow were present, I dropped my other plans for the day and off I went.

I arrived just before high tide, and found Roman Brewka, a fine photographer, out on the rocks--a sort of loose jetty protecting the marsh on the East River end--with a tripod set up in the rising water. He told me that the the birds were around, so I waited at the edge of the rocks, not wanting to clamber out to where Roman was set up. It wasn't long before we detected three birds in the tall grasses. 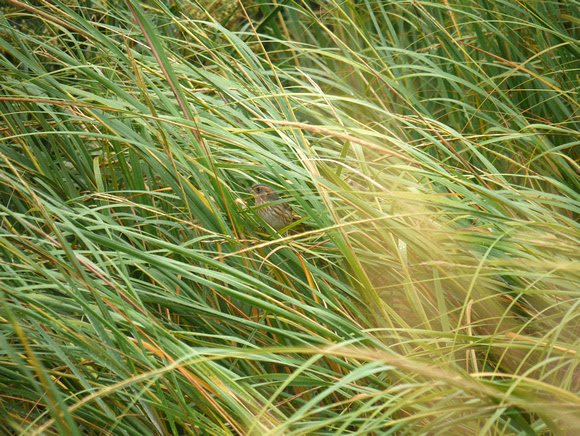 uncropped at 300mm on a micro 4/3 camera, fairly similar to the binocular view 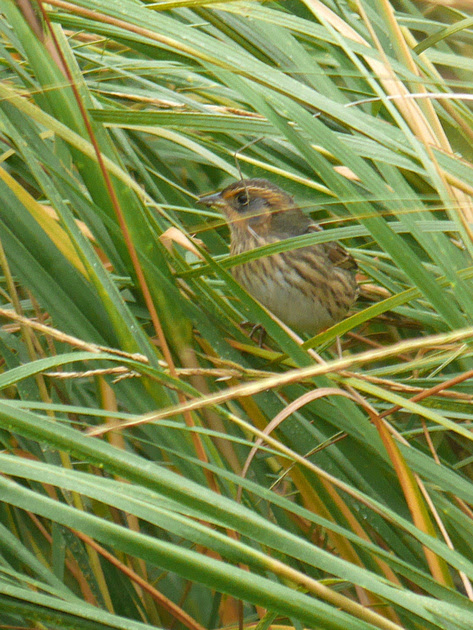 cropped version
Two were very secretive, but the third came out and posed a bit before leaving. 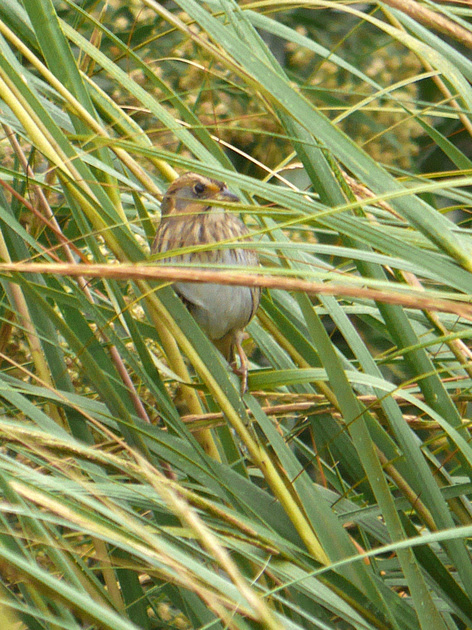 well, for this kind of bird, this is "posing a bit"
Unexpectedly, though it was supposed to be a hour past high tide, the water continued to rise, and I decided to retreat until the high tide was well past. I took a walk around the northeast shore of Randall's Island, and down the Bronx Kill, and returned three hours later. Two other birders were out on the rocks, and this time I did crawl out on the rocks for a better view into the marsh. This time, it was a long wait, but eventually the birds showed up. Again, only one really came out to be photographed. I got the photo at the top of this post, and this one: Nelson's with a snack
I think it's a very pretty little bird, and it was fascinating watching it attacking the grass stalks, moving from the bottom to the top and gleaning seeds from them.

I mentioned a possible Saltmarsh Sparrow. I don't believe I saw that bird, but Roman has photographs of it taken just before I arrived in the morning. Oddly, he hasn't posted any photos of the Nelson's.

There was also some discussion on the bird mailing lists about if the Saltmarsh or one of the other birds might be a hybrid. The thing is, Nelson's/Saltmarsh might not be a very good species split--the sparrows interbreed freely, and hybrids can't readily be told from the parent species. So it's kind of a mess.

But from everything I've looked at, the birds I photographed look seem pretty clearly Nelson's and the one Roman has posted photos of looks like a Saltmarsh. The main differences (as far as I can tell) are that The orange on the breast of a Saltmarsh is much lighter then the color on the face, maybe even absent; and the Saltmarsh is more heavily streaked and the streaks don't end neatly on the upper breast but extend down on the belly.

I'm quite happy with seeing the Nelson's Sparrows--I'm pretty sure all the ones I saw were Nelson's--and not disappointed not to have gotten the Saltmarsh as well.

I'm not sure what my new "nemesis" is. Maybe American Pipit, another bird that shows up during Fall and Winter on Randall's Island, but that I've never set eyes on. Maybe this year.
Posted by ed g. at 11:09 PM