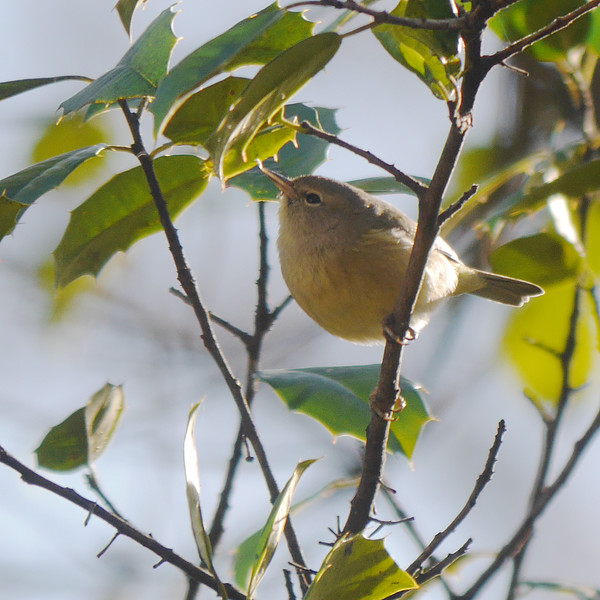 It's that time of year again--Christmas Count season! The 116th running of the Central Park Christmas Count went off on Sunday December 20th, in unseasonably warm weather. It was fun but, a bit slow. As always, a large group of people met at the south pumphouse of the Reservoir and divided into seven teams--covering the Northeast, Northwest, Reservoir, Great Lawn, Ramble, Southeast, and Southwest areas of the Park--and, accompanied by Urban Park Rangers, attempted to count every single bird in Central Park.

It was a little slow. The Park totals were 4264 individual birds representing 55 species. That's a little sparse--two years ago in terrible sloppy weather, for example, we had 62 species and 5414 individuals--and some types of birds, like native sparrows, had very low numbers. On the other hand , there were three late warblers--Wilson's, Black-and-White, and Orange-Crowned.

The best bird in the Park, for me, was the Orange-Crowned Warbler at the top of this post. It was found by the Great lawn group during the count, next to the "Three Bears" playground at 79th and Fifth Avenue. After the collation meeting, I went to look for it, and found a number of birders watching it some small distance away, along the 79th Street Transverse just south of the Metropolitan Museum of Art, foraging with a couple of Ruby-Crowned Kinglets.

It was a very active little bird, hard to get my camera on, though it gave some excellent (though brief) views. The photo above is the best one I got, but if you want to see what a better and more patient photographer was able to get, you should check out this photo at Jean Shum's website. You should scroll around for other great views as well.

This year, I was in the Ramble group. It was really too large a group, over 20 people, and a big chunk of the Ramble is currently fenced off for maintenance of the paths (which doesn't seem to me actually happening, but that's another matter). Our best bird was the Great-Horned Owl who's been hanging around for almost two months now. 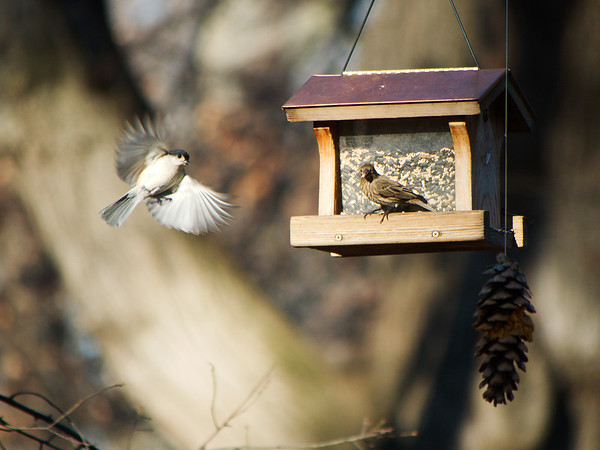 Near the owl's roost, the bird feeders were quite active. Here's a Chickadee coming in for a landing next to a House Finch.

So, that wraps up my posting for 2015. I hope to update this a little more regularly next year.

My new work neighborhood is less interesting, but I'll have something to say about it eventually. really, there are birds almost anywhere if you look.
Posted by ed g. at 10:21 PM No comments:

Everybody's heard about the bird

If you live in New York, even if you're not a birder, you may have seen the story about the Painted Bunting which showed up in Brooklyn's Prospect Park a week ago and has attracted a gaggle of bird paparazzi and a bunch of ordinary people. he's quite a charismatic little fellow. A male Painted Bunting has more color for his size than any other North American bird. Blue head, neon green back, deep red underside--think of a largish sparrow that's been used to clean paintbrushes.

This bunting has been in the Post, he's been in the Times, he's got the obligatory twitter feed, he's been on a selection of the finest websites and blogs (there's a nice roundup by David Ringer), there's so many great pictures you wouldn't believe. There isn't a lot to add, but I'm going to anyway.

Elena grew up around Prospect Park, so we took off Saturday morning for her old haunts. The bird was easy to find: we entered the park in the southeast corner and immediately spotted a crowd of about a hundred people with binoculars and huge camera lenses staring into a bit of shrubbery. Ah, my people!

he was tricky to see in the undergrowth--it always amazes me how even very colorful birds can disappear when they aren't moving--but after a few minutes he flew up into a tree with a Cardinal. That was the highest we'd see him.

He flew off to the greenroof of the skating rink building (the Lefrak Center), where he chowed down in dense native grasses. A little patience was rewarded with some good looks when he came out in the clear for a minute.

After that, Elena and I went off for a stroll around the park--there was an American Wigeon on the lake, and a large number of Coots, and a famikly of Mute Swans--and then went to the zoo. I decided to come back on Sunday and see if I could get a better photo.

Sunday, the bunting spent the whole day in a little patch of grasses and shrubs. He was pretty well visible, but the best vantages to see him had him quite backlit. still I'm pretty happy with a couple of my snaps.

Now, this bird is pretty lost. They breed in Texas and Louisiana, and along the Carolina coast, and they winter in Florida, Cuba, and Central America. Usually a vagrant bird like that who shows up in the northeast is in serious trouble, but in this case I have some hope he'll survive. from all accounts He's been eating continuously from dawn to dusk every day, and appears to be getting pretty plump. That sounds to me like the behavior of a bird getting ready to migrate, so maybe he'll take off south. Even if not, a good fat reserve could help him through the winter, if it's mild.

I got in some more birding around the lake on Sunday. There was a Black-Headed Gull reported, but I did not consciously see it. I'm not sure I could pick one out of a police lineup (which, as it happens, is a fairly common venue for gulls).