The beginning of Spring 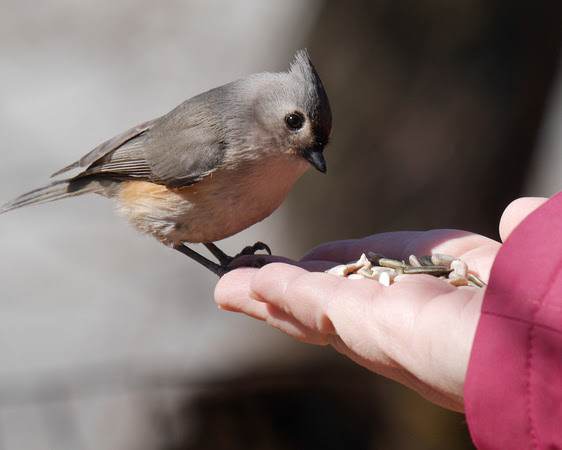 Watch this! I am going to eat these seeds, and not get eaten!
Spring began this weekend. It was a long winter, and Elena had some knee trouble and couldn't get out much. We were finally able to go birding in the Ramble Sunday, and it was a fine outing.

The first order of business was to feed the Titmouses and Chickadees at the Upper Lobe. The Titmousen were characteristically fearless; the Chickadees were a bit more standoffish. One was at least interested enough that it actually sat still for many seconds at a time, and I was able to get some of my best Chickadee photos ever. 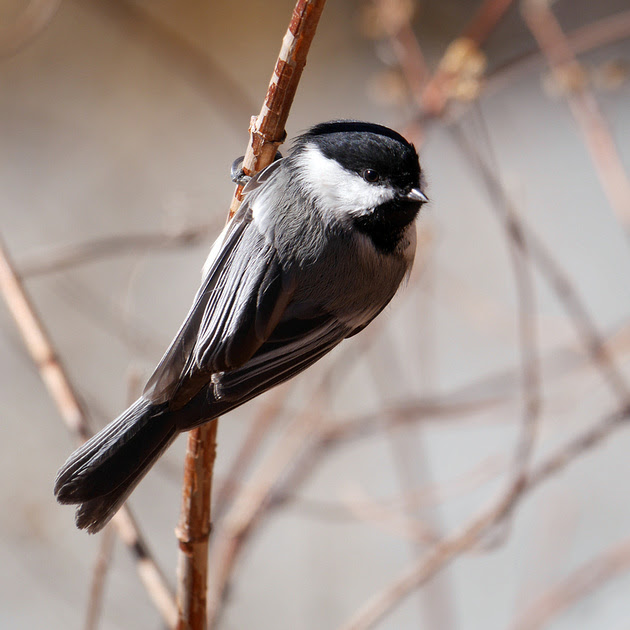 I'm not sure I want to do that
We didn't neglect the otehr little birds, though they never come to hand. 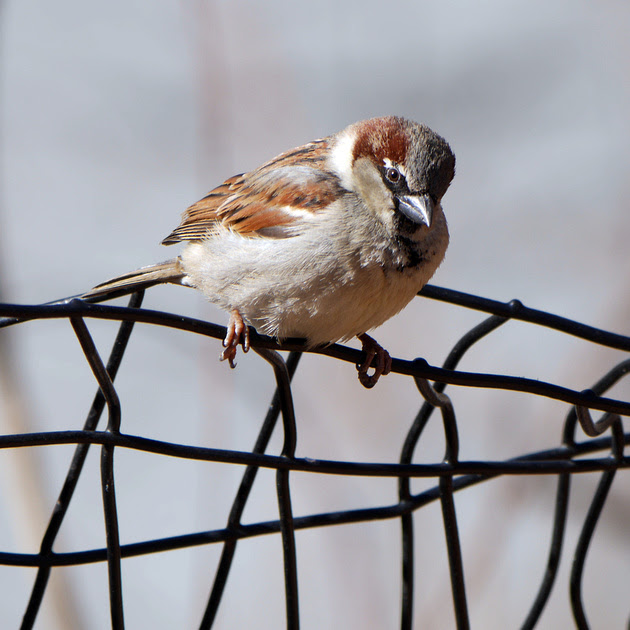 that's right! never neglect the Sparrow, for he is puissant and fierce
All the usual late winter birds were around. 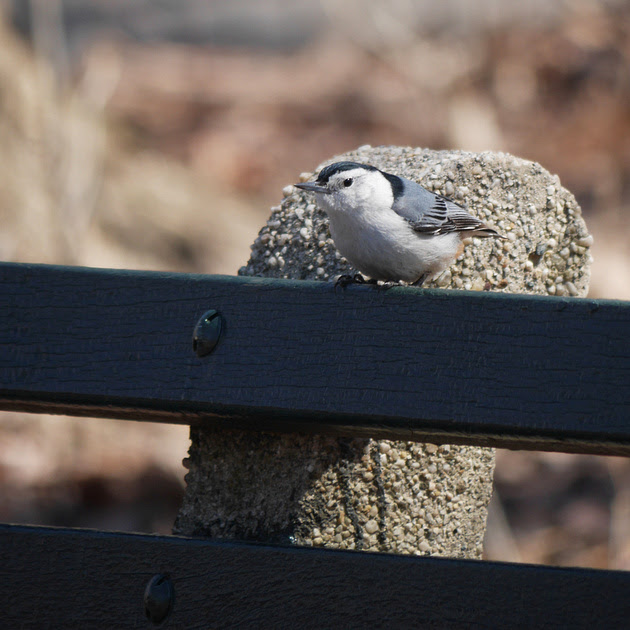 I'm not going to show you where I've stashed the seeds
And there was singing everywhere. This Cardinal gave a concert about 4 feet from a path and just six feet up. 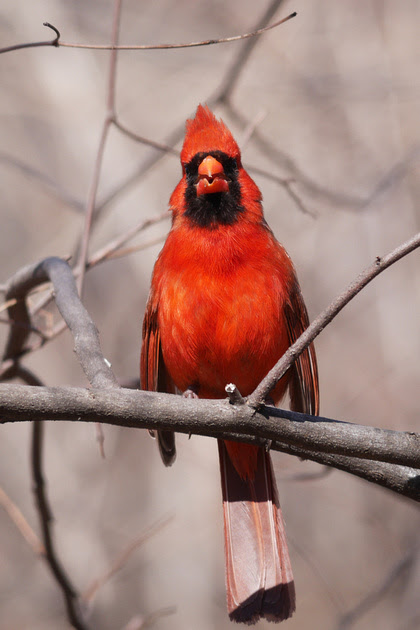 I call this number, "Get Out of My Territory, Fool"
The best birds of the day (in the birding sense) didn't yield any good photos: two American Woodcocks deep in the brush near Azalea Pond; a Merlin perched briefly atop a tree at the south end of Maintenance, then flying fast and hard toward Belvedere Castle; a Turkey Vulture high, high overhead. Fine things to see, though.

You don't think of gulls as being companionable, but they'll loaf around together. 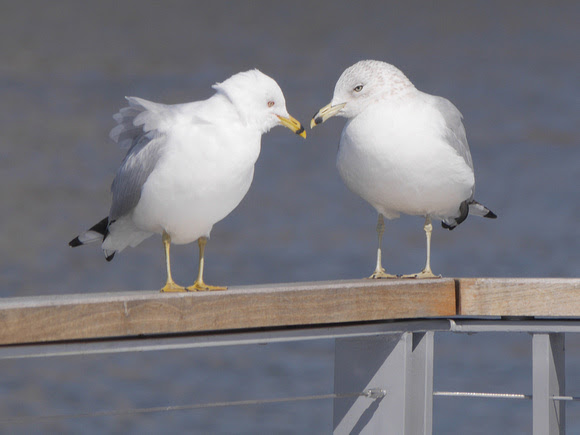 Coots--practically the definition of cantankerous--like to just hang out sometimes. 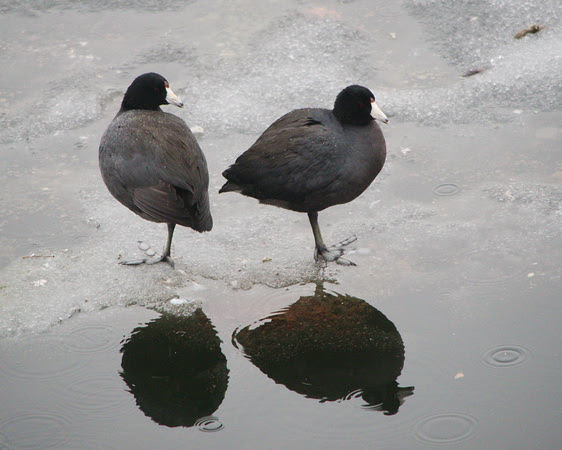 I suppose ducks seem generally more friendly, though you know their private lives are appalling. 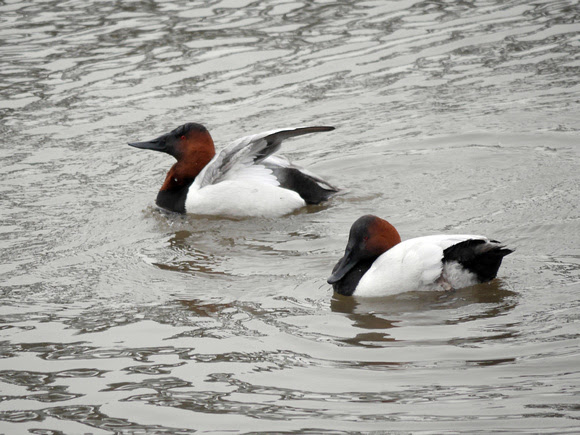 Oh, what the heck, here's a couple of more gulls, just chillin'. 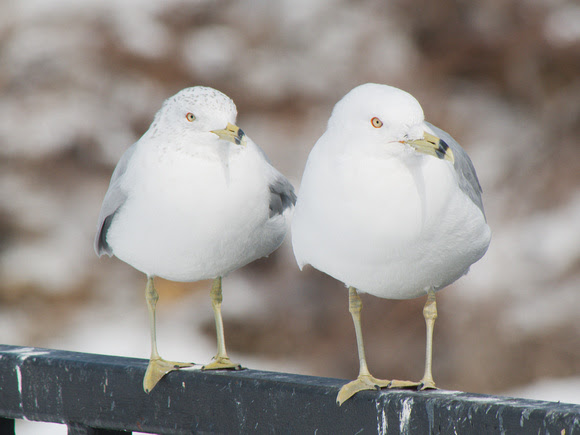 One of the disadvantages of productive employment is that I have less time for birding and wind up chasing birds based on reports I've seen. Other people's Birds, OPB.

Sometimes this works out fine. A bunch of people had seen a Long-tailed Duck at the bridge over the Harlem River at Broadway. So I went up there bright and early on Saturday. 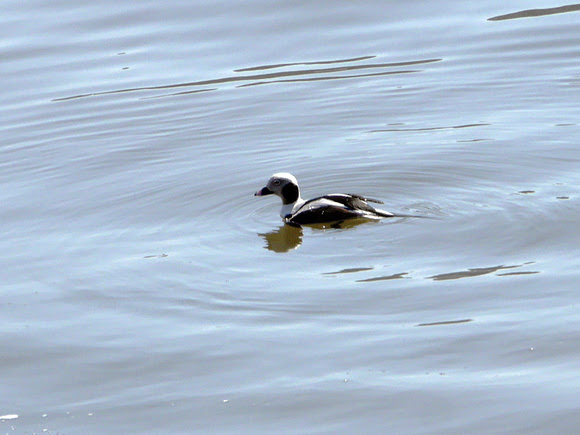 Long-Tailed Duck, what the old-timers still call an Oldsquaw

Very nice-looking drake, hanging out with a female Ring-Necked Duck. On the way home, I went to Central Park. When I got there, I saw a report on-line, only an hour old, of a Scaup on the Reservoir. "Oh, I can do that", I thought. Turned out I couldn't. No Scaup for me. Also no Long-Eared owl, which has been spotted several times in the past few days, originally in the Shakespeare Garden.

That night, I saw reports from Randall's Island, where one observer had seen a bunch of interesting birds--Killdeer, Green-Winged teal, American Wigeon, Common Goldeneye--so that's where I spent Sunday. 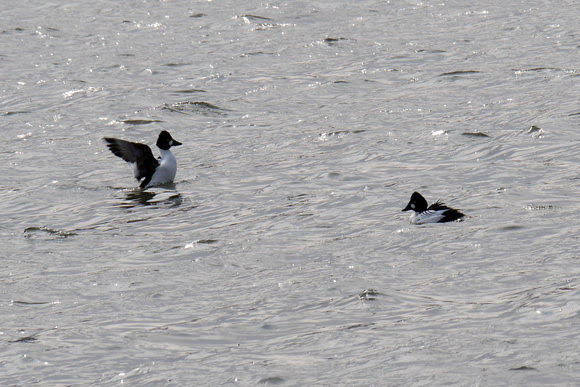 The Goldeneye were there, two drakes and a hen, between the south shore and Mill Rock. This was actually the best look I've ever had at them. The drakes were diving, but it was the female who was being harassed by a young Herring Gull. Very strange--normally gulls attack ducks after a dive, when they might be coming up with food. I think maybe this one had a bright idea--"they always come up with food after a dive so if I force one under, I'm perfectly placed to grab it when she comes up." That would be unusually complex reasoning for a gull, even though completely wrong. 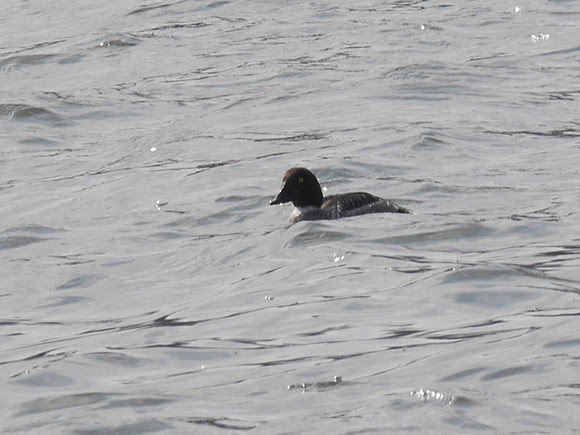 Common Goldeneye female, in between annoyances

On the north tip of the island, I failed to find the Wigeon or Teal on the Bronx Kill, but a Killdeer was poking along the mudflats. 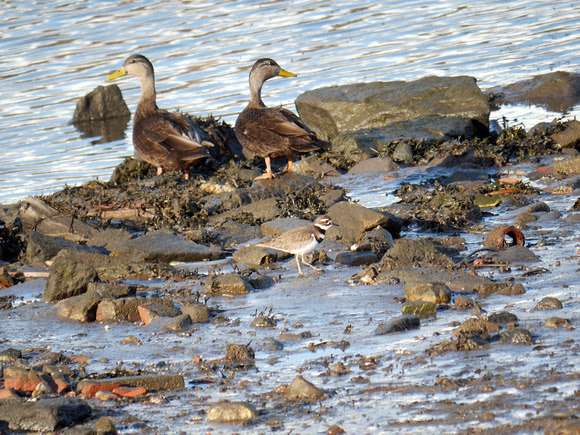 A pretty good weekend in all. A few more weeks and there'll be some many birds coming in, it will hardly matter when the online reports say. I can do my own hunting. 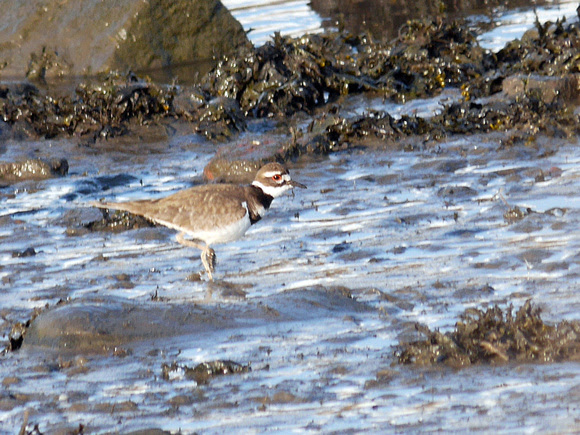 Ha ha! Just kidding. I'll be looking at the reports even more then. Golden-winged Warbler, come on out!

I still haven't seen a number of regular winter waterfowl--like Horned Grebe, Common Loon, Greater and Lesser Scaup--so I went up to Randall's Island on Saturday. I didn't have any luck with the waterfowl, but I did have a very nice look at a Belted Kingfisher. 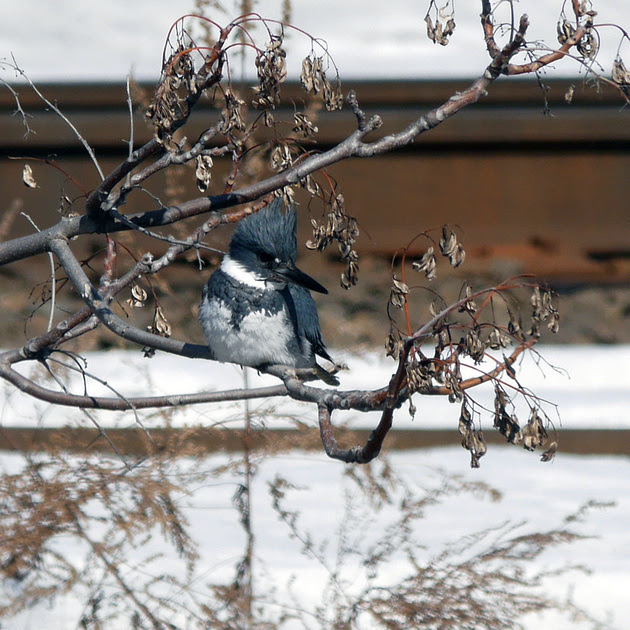 Mister elegant
He was hunting up and down the Bronx Kill--the little neck of water separating Randall's from the Bronx mainland--and at one point hit the water and then came up and hovered a few feet above the water for about 5 seconds. 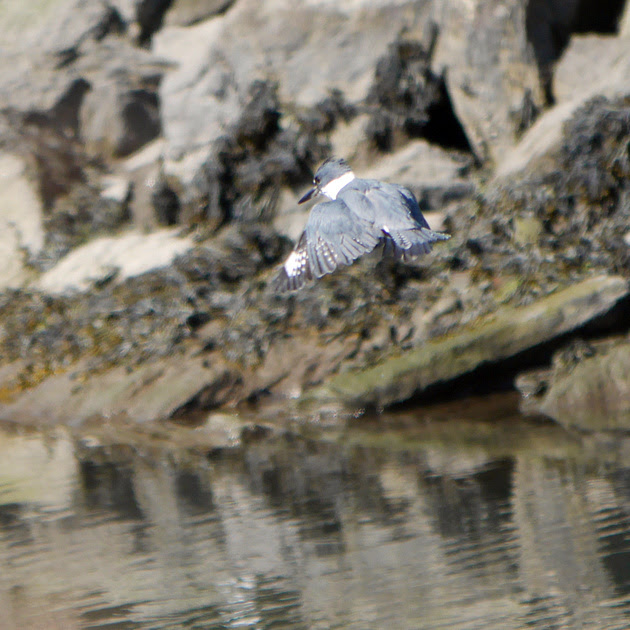 Hovering over the Bronx Kill
I think he was hoping for a second try at whatever he had just missed. It was interesting to see how his wings looked like a hummingbird's while hovering. Fascinating. 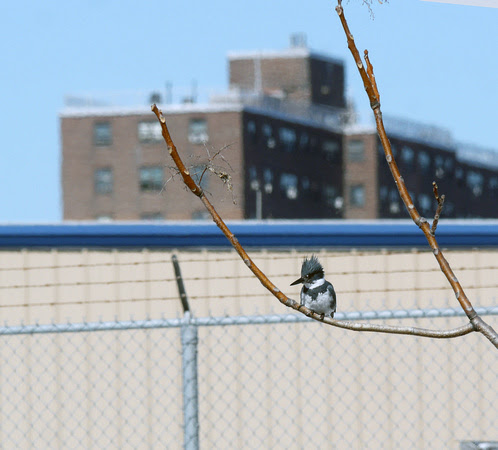 Urban Kingfisher
Earlier in the week in Central Park, I had nice views of some of the resident woodpeckers. Several Yellow-Bellied Sapsuckers overwintered, which is a little unusual. 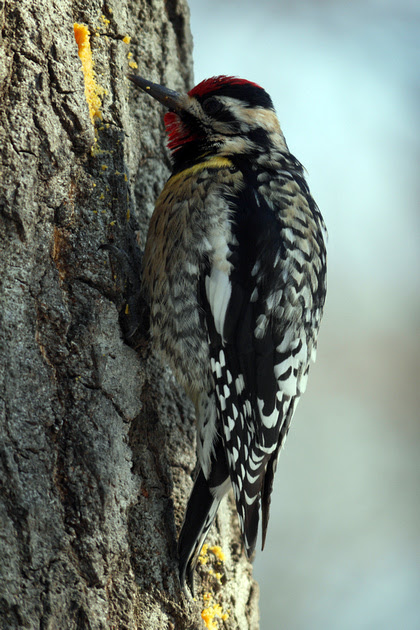 Sapsucker at Evodia
And there's at least one pair of Hairy Woodpeckers around. If it's only one, they range from Greywacke Arch and Tanner's Spring on the east and west sides of the Park, and also all over the Ramble. So there may be two or more pairs. 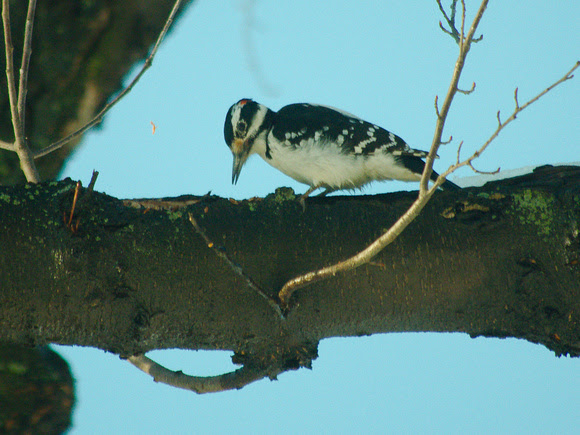 Hairy Woodpecker at work
Posted by ed g. at 6:53 PM No comments: