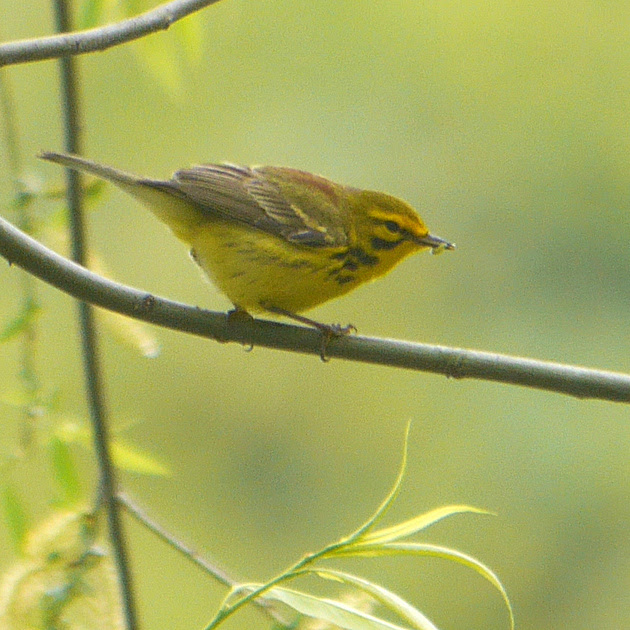 Prairie Warbler
One thing you will hear birders talk about is "fallout". This doesn't have anything to do with nuclear weapons--it's about bird migration. Sometimes during the spring migration, when conditions are just right--southerly winds at night, then rain a little before dawn and heavier storms just to the north--you wake up in the morning to find that migrating birds have descended on local parks and green spaces in huge numbers. They've been forced to fly low by the rain, and some have had to turn back from the storms in the north, and they all fall out of the sky after a long night's flight to frantically feed and then rest for the next night's flight.

On Mother's Day, May 8, New York City had an epic fallout event. By noon, according to one experienced birder's compilation of observations over a hundred species of bird had been seen in Central Park, including two dozen kind of warbler. 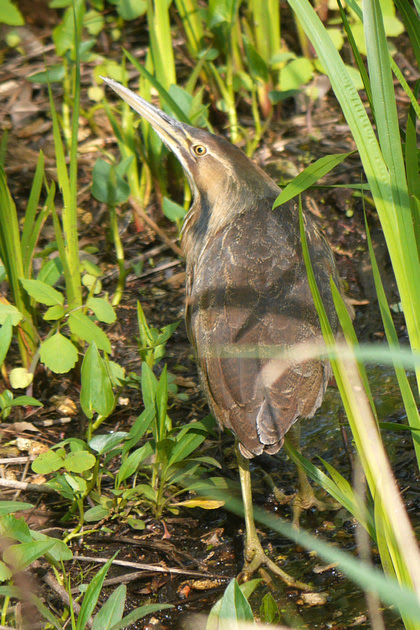 American Bittern
In the Ramble, three very unusual migrants were within a hundred yards of each other. In the area called the Oven, and American Bittern spent the day hunting in the tall reeds. It's bulbous form was clearly visible from the rocks overlooking the Oven from the west ("Willow Rock").

After the early rain, it turned into a beautiful day, and many people rented rowboats on the Central Park Lake. When they approached the Oven, birders would call to the rowers to turn back so as not to disturb the Bittern by coming too close. 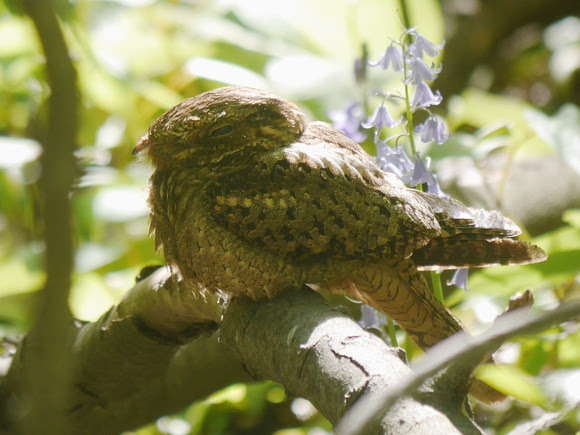 Chuck-Will's-Widow
Fifty yards to the northeast, a Chuck-Will's-Widow roosted very close to a path. Chuck-Will's-Widow (named for its call) is a nighttime hunter of insects. By the time it was discovered in the mid-morning, it had eaten its fill and was quietly waiting for evening, relying on its cryptic coloration to hide it from the large mammals only a few yards away.

Let me digress here. On twitter, I saw a drawing by Alan Messer of the Chuck and environs. It's a great example of how drawing can sometimes be much truer than photography. The detail and depth-of-field of the drawing were simply not possible in a photo under the dim lighting. 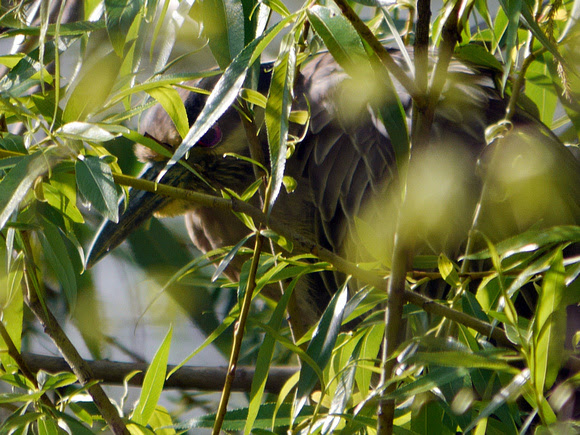 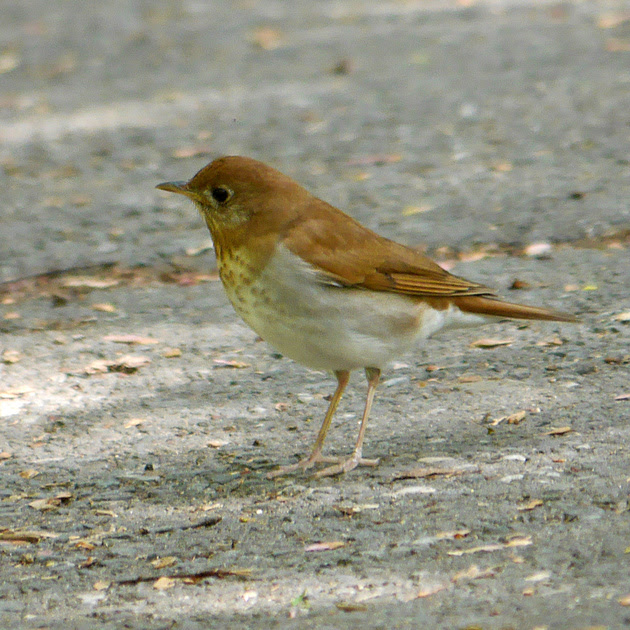 Veery
Of course, there were a lot of more expected migrants. All the brown thrushes were in, like the Veery above. On the south slope of Summit Rock, right by Central Park West, Tom Fiore had sixty thrushes in an area about 40x50 feet, including Hermit Thrush, Veery, Swainson's Thrush, Wood Thrush and Gray-Cheeked Thrush at least. 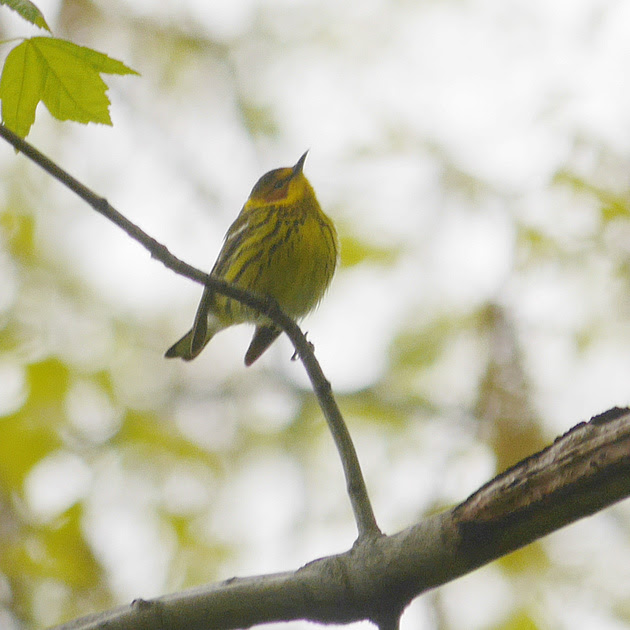 Cape May Warbler
Maybe the biggest story was the warblers. According to Tom Fiore's end-of-day roundup of sightings, people saw at least 28 species of warbler in the park (among 115 or more total species) by day's end. 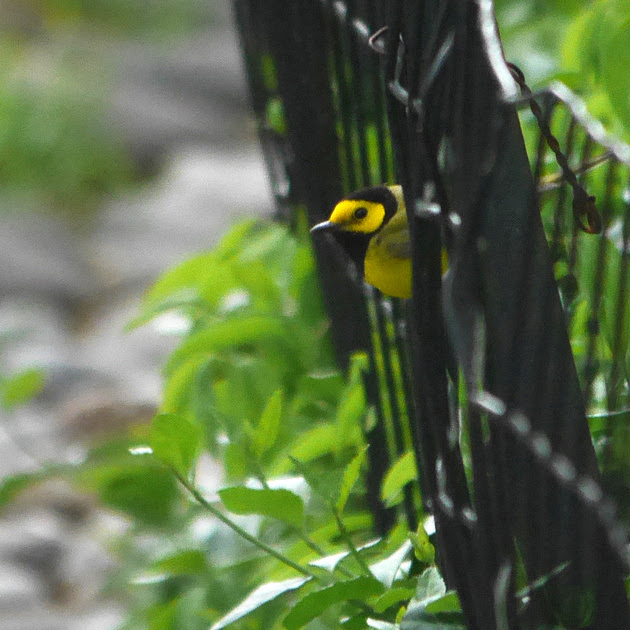 Hooded Warbler
Considering that there are only 35 or 36 species of warbler that move through the area in migration, and three of them are normally done migrating before May, 28 in a day is really impressive. (I had only twelve that day, myself, and 48 total species, but a big chunk of my day was spent on social obligations.) 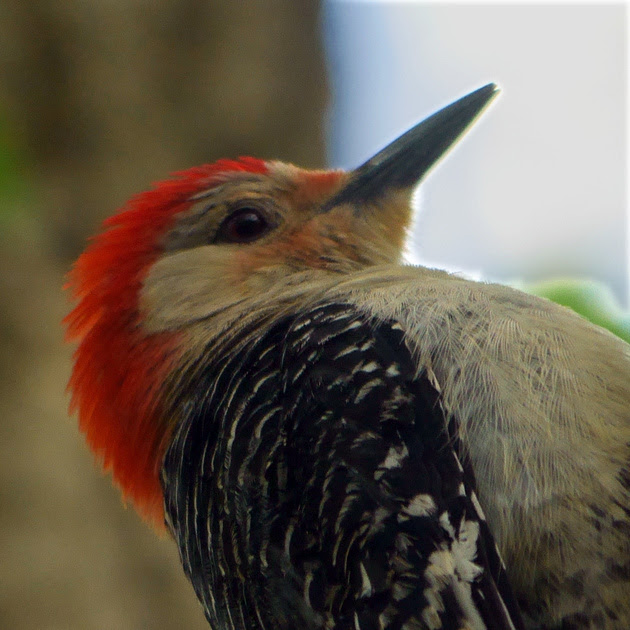 I like to see Seaside Sparrows by the seaside, by the beautiful sea! 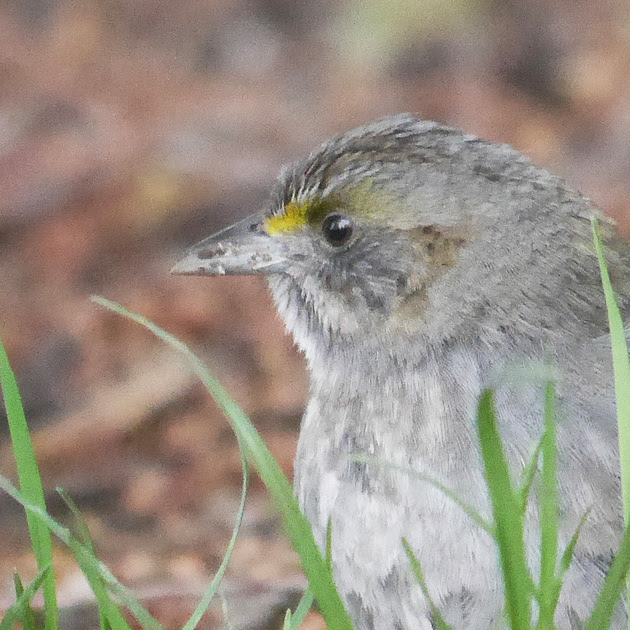 One very rare visitor in New York County is the Seaside Sparrow. It's a marsh bird, like the Nelson's and Saltmarsh sparrows, and Manhattan has relatively little marshland anymore. But on the late afternoon of May 5th there was a report of three in a small green area called Clinton Cove, on the west side along the Hudson River about 55th Street, and of course the area was inundated with birders. 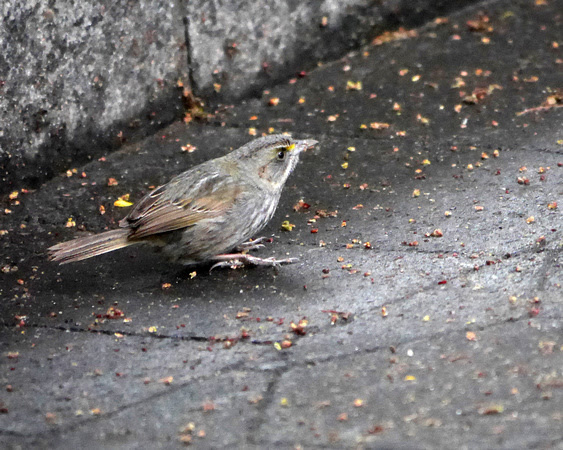 That isn't all the area was inundated with. When the birds were found by Adrian Burke, it was gloomy and threatening weather, and then they were refound the next morning in pouring rain. People found there way to the spot all day. The birds fed mostly in a median between the Hudson Greenway bike path and a pedestrian path. A fourth was spotted, and then one was carried off by a Kestrel.

Lucky for me, three were still there when I finally got there late on May 6. The birds did not seem bothered by people at all. The habitat seemed very poor to me, but there they were--stocky, largish sparrows, extremely drab, with a bit of yellow in front of and over the eye, and a whitish throat. Very unprepossessing birds. 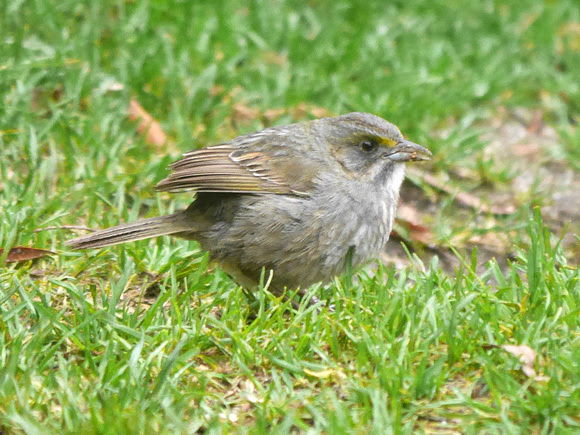 Also, still another Seaside Sparrow was spotted about a half-mile north of Clinton Cove, also on the Hudson River Greenway. It never rains but it pours, I guess.

The birds lingered until at least Tuesday, although at least one more disappeared. Hopefully it flew out rather than becoming a Kestrel's dinner. 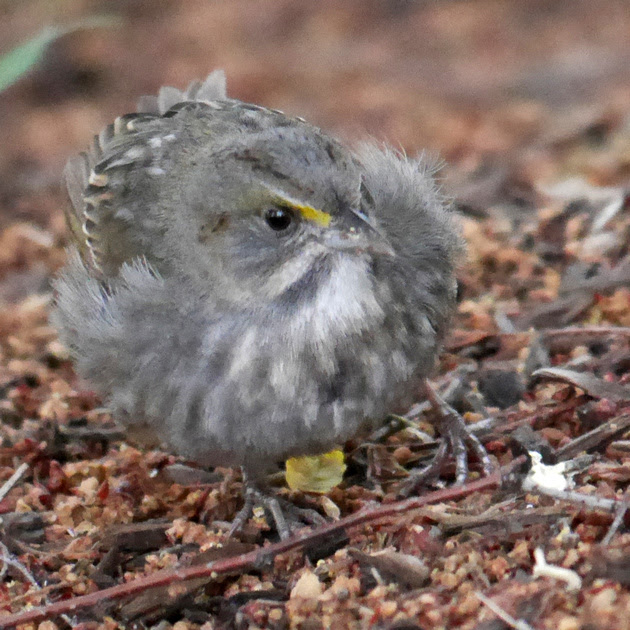 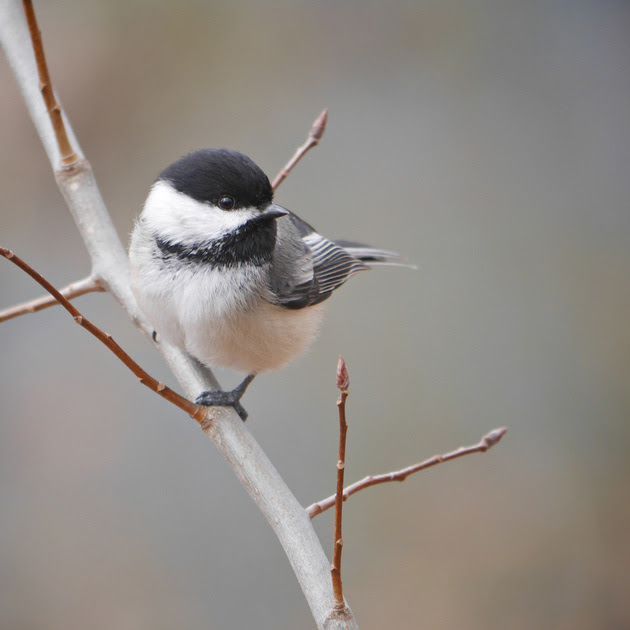 I'm going to continue catching up in reporting my early-Spring birding, but first a couple of notes about the state of the Spring migration. It's shaping up to be really strong, at least for variety. Some people have had 20-warbler days in Central Park in late April, which is impressive, and even I have managed double-digits (and 19 warblers before May 1, which is a great total for me). If you have any chance at all to get out, do it--there are a lot of birds to see.

Backtracking a few weeks, I went to various places to spice up the March doldrums. A trip to the NY Botanical Garden wasn't too productive, though it did get e my first Pine Warbler of the year, in addition to the curious Chickadee at the top of this post. 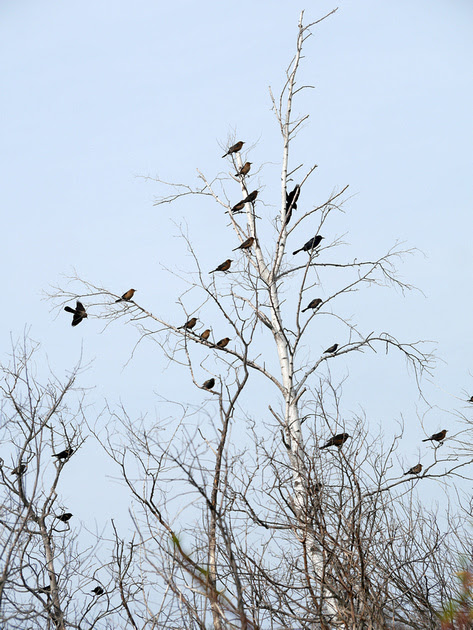 Our friend Barbara took us out to Jamaica Bay NWR for an afternoon, our first time there. There were some nice birds about, like Ospreys and American Oystercatchers, but they were mostly too far away for good photos.

There was a big flock of Boat-Tailed Grackles (part of which was in the tree in the photo above). I hadn't realized they were so well-established in the New York area. I saw one at the NY Botanical Garden a few years ago and it was a startlingly rare sighting. 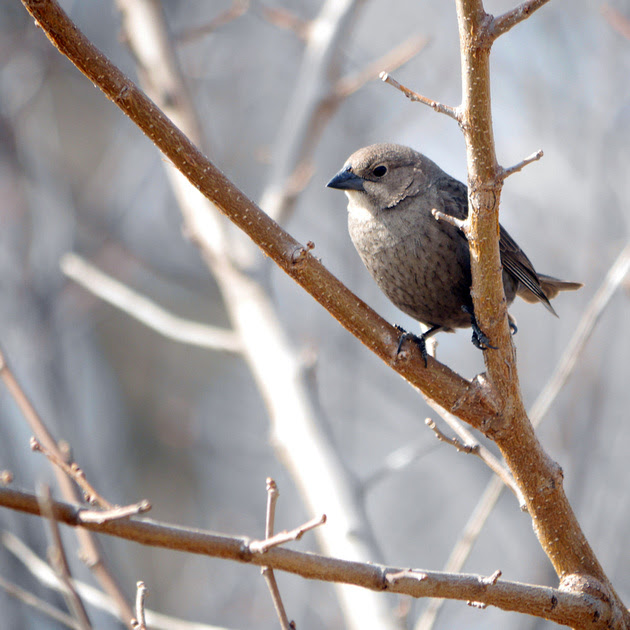 This female Cowbird was roosting in a tree outside the visitors' center, directly above a nest box, which is bad news for some nesting bird. 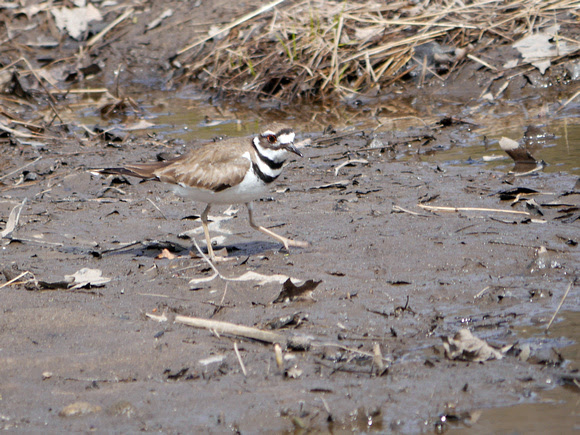 On a trip out to Roseland NJ for a business meeting, I took a walk at lunchtime around the industrial park we were in. I heard a lot of birds tooting and peeping nearby. I went around a building and found a culvert and a gathering of Killdeers, feeding and flying about. They were all calling constantly, justifying their Latin name of Charadrius vociferus, which loosely translates as "loudmouthed Plover". 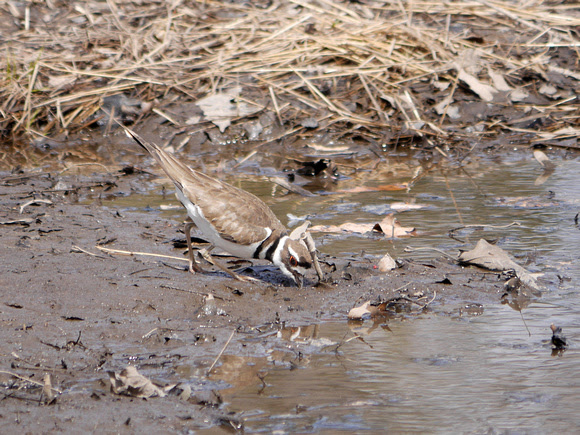 As always, look for birds and you'll find birds.