On the first weekend of Summer, our friend Gary drove us up to his family's summer house in Prattsville NY, Catskills. It's a lovely place that I've blogged about before.

On the way up, we stopped for lunch at the original Bread Alone shop in Boiceville. Ten minutes looking at the scrubby woods at the edge of the parking lot yielded a Vesper Sparrow along with Carolina Wrens, Common Yellowthroats, and Catbirds.

We arrived in Prattsville with plenty of light left on the longest day of the year. I went for a stroll around the area. As last year, the highlight were the Bobolinks nesting in the hayfields at the nearby crossroads. 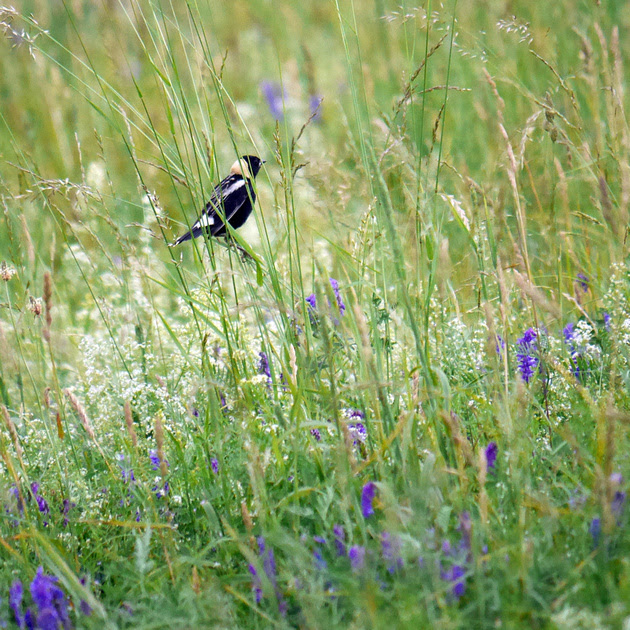 There were more than last summer, so I guess they must have done well. For the first time I heard the males singing. The males stayed out of sight until I was walking along teh edge of the field, then they rose up, one or two at a time, giving a wild song like someone tuning an old-fashioned radio. I imagine they were agitated by having a large mammal near the nest site and were trying to draw me away. Before I arrived, a couple of cars went past, and those didn't bother the birds at all.

This was also the first time I got a good look at Bobolink females. They're quite good-looking birds as well, though much more understated than the males. 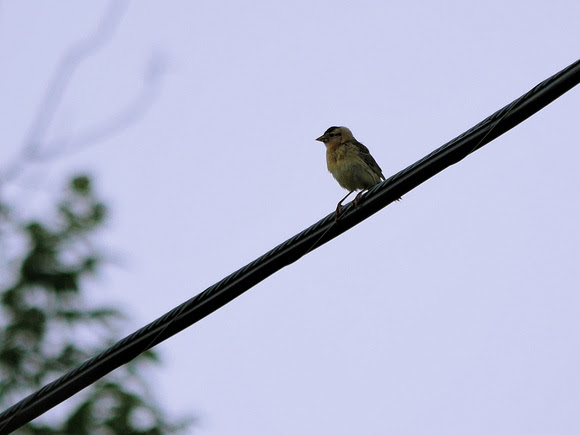 I went down the road a little. I heard a hoarse deep screaming call in the distance, and then nearer by came an answer--a Raven, who took off from a tree, flying toward the other call.

Something else called nearby like a police whistle. As I peered into the woods to find it, a Turkey Vulture flew in above me and landed briefly in a treetop. 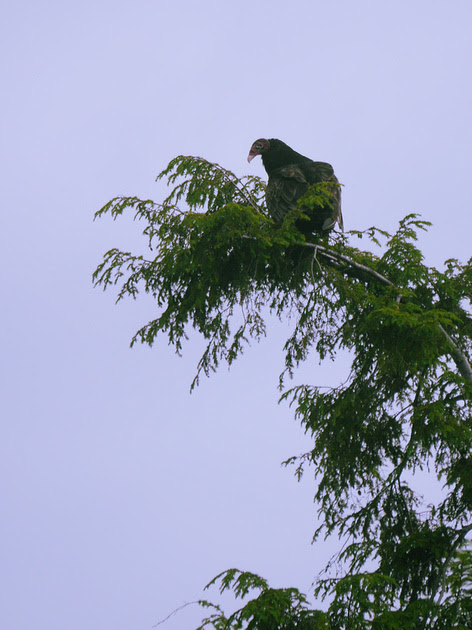 here's the world-famous vulture...
Back at the house, we heard Common Yellowthroats, Song Sparrows, and Chestnut-sided Warblers in the yard, and an Indigo Bunting perched on a wire. In the distance we heard a corvid party--the Ravens, along with crows and Blue Jays calling continuously for a half hour.

On Saturday night came a soaking rain. It finally let up a bit after 7 on Sunday morning, and I went off through the fields. I got good and soaked from the tall, wet grasses, too.

Later in the morning, Gary and I walked up the road partway up Bearpen Mountain. Singing Indigo Buntings were everywhere. 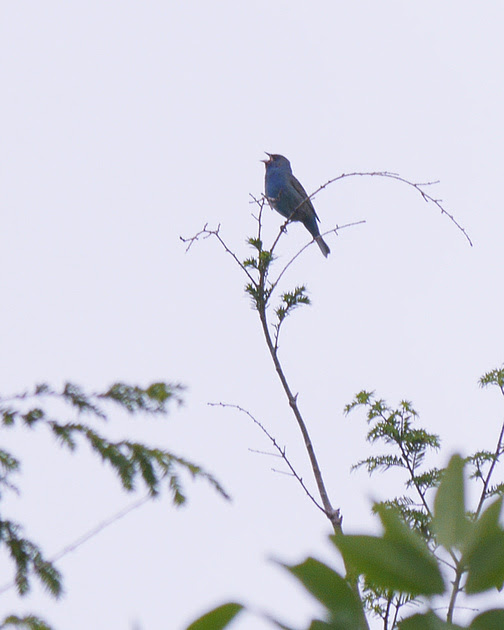 A large number of crows were conversing, not too distant but out of sight. We did spot some Wild Turkeys, though. 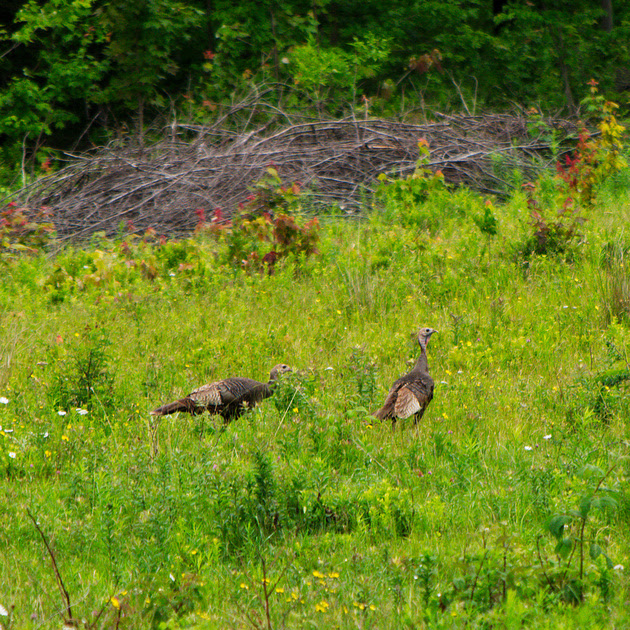 When we headed back to the house, the Bobolinks were out again. 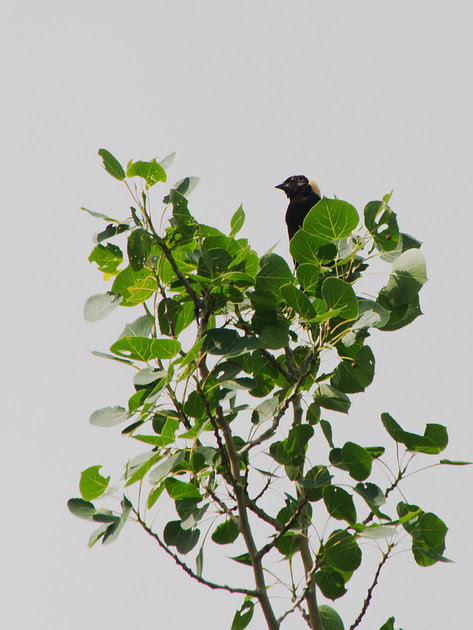 A bit more rain came in after lunch, and by the time it was over it was time to leave. While packing the car, we heard a loud banging from the old barn. 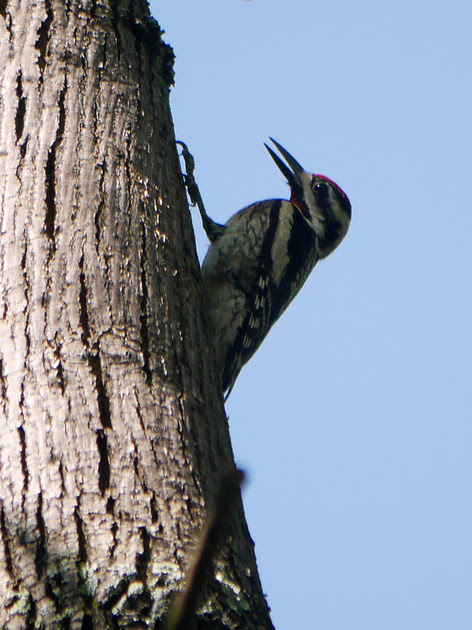 The Sapsucker Is In

I didn't manage to get a picture of it, but this natty Sapsucker was banging the tin roof of the barn, which resonated nicely. It made a hell of a racket, that is to say, demonstrating to all potential rivals that the resident Sapsucker was on his territory and not to be messed around with.

On Sunday I made my annual pilgrimage out to Governors Island. As always, I saw barn Swallows swooping around the lawn in front of Fort Jay as soon as I got off the Ferry. This year, there's a special attraction--a Yellow-Crowned Night Heron nest, apparently the first ever on the island.

I was able to find the nest due to excellent directions from Ben Cacace. Ben maintains a great set of pages about NYC-area birding hotspots. Here's the one about Governors Island 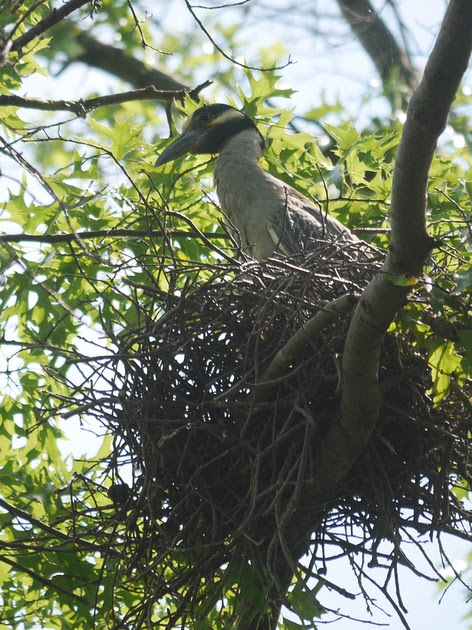 Yellow-Crowned Night Heron nest
The usual major attraction has always been the nest colonies of Common Terns on the piers of the east side of the island. Two of the piers are in the part of the island still closed to tourists, but the third is at Yankee Pier, where the ferry from Brooklyn arrives. I think this is the only Common Tern nesting area in the region. 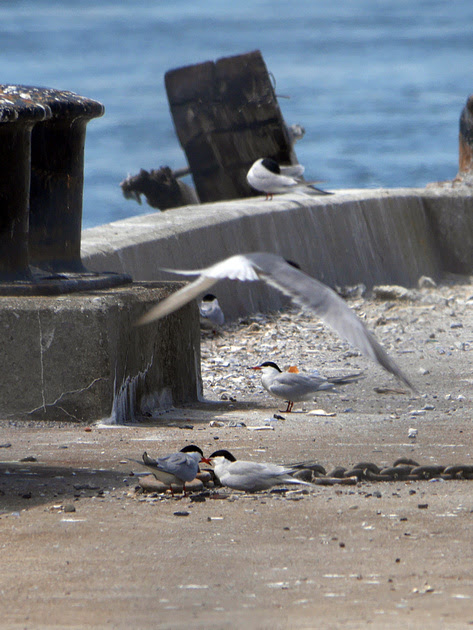 Common Tern nesting area on Yankee Pier
Terns nest right out in the open, building a small cairn of pebbles and shells. 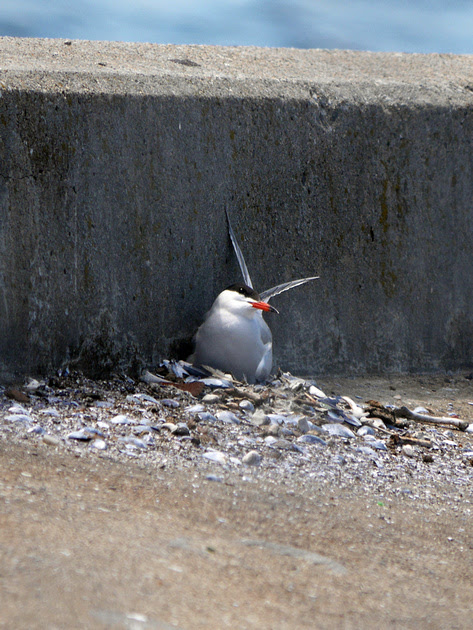 Tern on nest
I'm going to try to get out to the island again in July when the eggs hatch.

There are other breeding birds on Governors Island as well. At Ligget's Terrace, which is where the food trucks are, I stopped to watch this singing Mockingbird. Sing out!
After he flew off, I noticed that a Herring Gull was repeatedly diving on a man walking by. It was quite a sight. He stopped to talk for a few minutes--the gull screaming and diving all though the conversation--and I directed him to the tern colony. It was only after he left that I spotted the baby gulls on a path nearby. 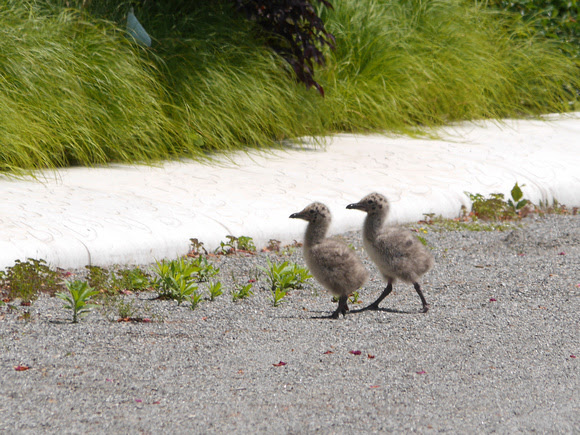 Even baby gulls are cute. Look, they're like little Kiwis!
There's a field nearby on the west edge of the island, slated for eventual development but currently home to several Herring Gull and Great Black-Backed Gull nests.

Before going back to the ferry, I visited the heron nest again. The bird was quite undisturbed by the many passers-by, or by the large number of crows (American and Fish Crow both). I suspect the crows do not want to deal with that massive sharp bill. 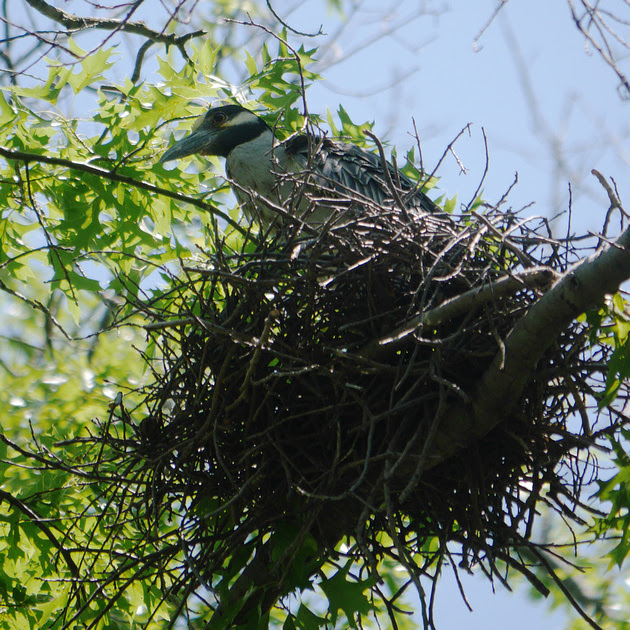 Spring is over, but summer hasn't started

Let's start with the big news from Central Park: the Warbling Vireos have hatched! 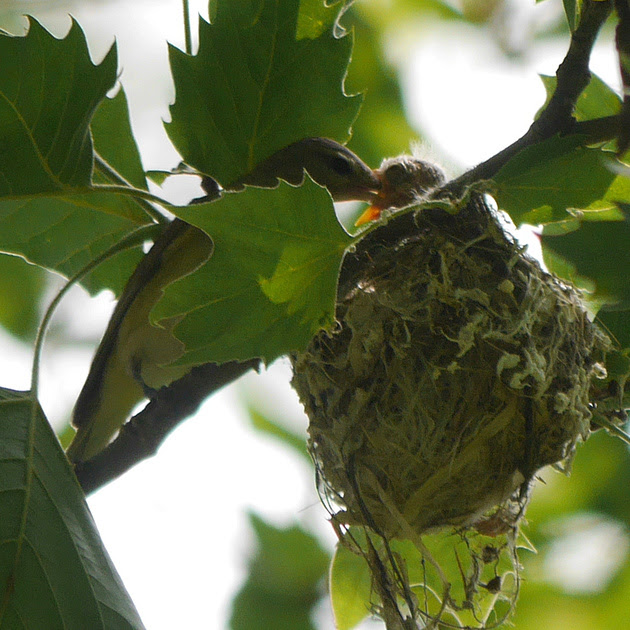 Warbling Vireo feeding nestling
The hatching happened over the weekend while I was sick, but I was able to get a couple of nice photos of the nestlings being fed today. I'm pretty sure there are at least two nestlings, and this species usually lays four eggs, so they might be more.

It was interesting watching the nest. It seems to work just as I've read: most of the feeding is done by the female, though the male does some and is always nearby guarding the area. What happens is, he'll give a short burst of song, then fly in to quickly check the nest, and fly off; sometimes he'll sing again after flying out. The female arrives a minute or so later and does a more thorough job of feeding.

Also, the intervals between feedings are surprisingly long (again, just as I've read), between five and ten minutes. They're supposed to get increasingly frequent during the two weeks it will take the little ones to fledge.

That seems backwards, doesn't it? Shouldn't the newborns demand constant feeding? I wonder if it's a defense against parasitism. The much larger cowbird babies need more feeding. That's why they kick their host's offspring out of the nest--they'd starve if they had to share resources at all--and kicking them out is part of why they have to be larger at hatching. Anyway, it seems to me that the very slow feeding schedule of the Warbling Vireos would be bad for such nestlings--maybe that's enough to keep their nests from being parasitized.

Anyway, Spring ended with the traditional sighting of a flurry of female Blackpoll warblers. 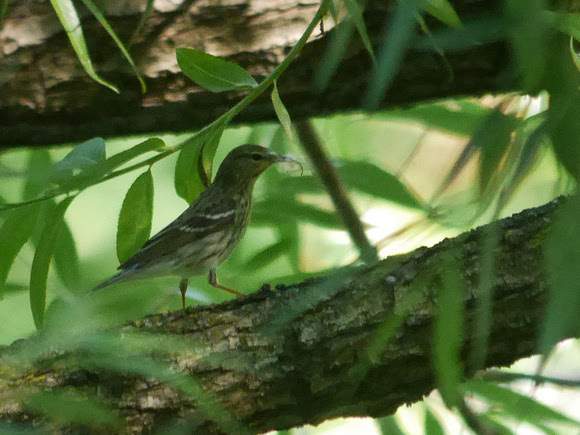 that's all, folks!
Blackpolls are the latest Spring migrants among warblers, and the females (as in many species) migrate later than males, so when you see female Blackpolls coming through, it's about over.

Of course, there are some later-arriving non-warbler species, like this Yellow-Billed Cuckoo. 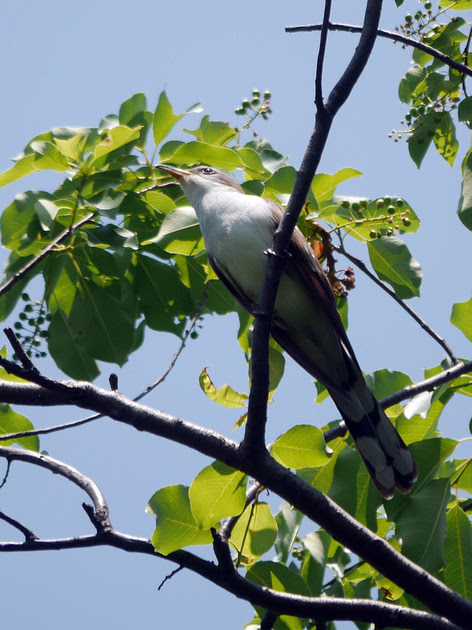 a two-cuckoo year!
That sighting game me both Cuckoo species for the year, which doesn't always happen. And there are always stragglers, like this Lincoln's Sparrow who is stuck in Bryant park: 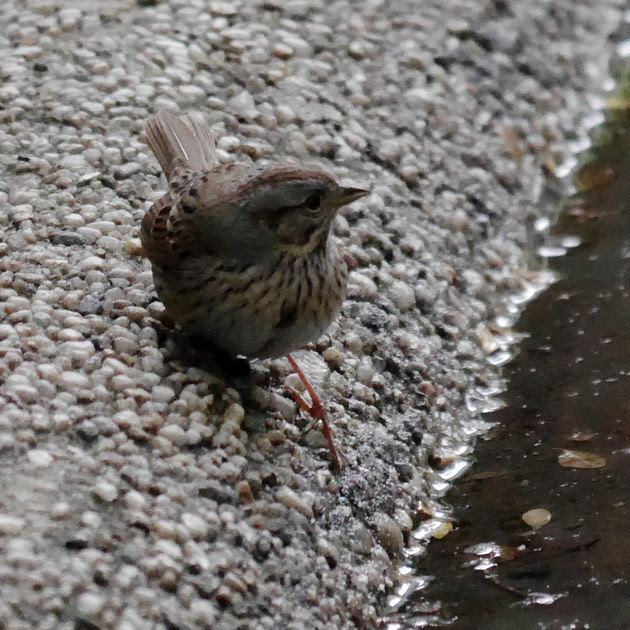 Lincoln's lurking near the library
There was a nice Swamp Sparrow, too, and a couple of White-Throateds, all around the birdbath in the northeast part of the park. Hopefully the'll all find their way out soon.

So spring is gone, but it doesn't feel much like Summer yet--cool though humid. But there are fledling birds all over--robins and Starlings and House sparrows, and at Turtle Pond, a raft of ducklings. 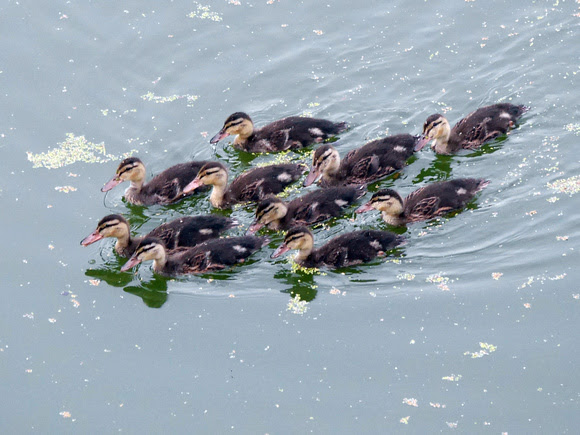 a raft of ducklings
I think these are Mallards, but another observer thought Gadwalls. There is a possibly nesting Gadwall pair as well as a female Mallard nesting near the pond. I think their bills are too long for Gadwalls, though those flank spots are very Gadwallish.

Since we're back to the baby birds, here's another pic of the Vireos. Wonderful little birds. 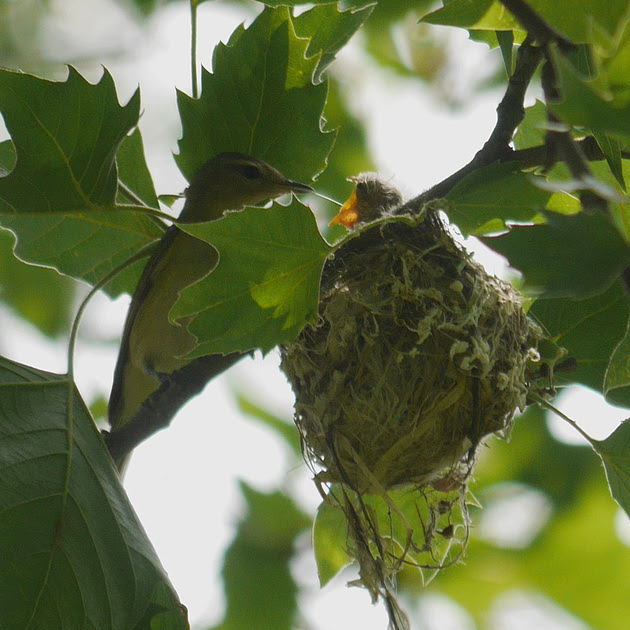 I warn you, you're going to be seeing a lot of this nest the nest couple of weeks
Posted by ed g. at 12:35 AM No comments: