A well-known location for nesting Piping Plovers is at the tip of Breezy Point, which is as far west on the Rockaways as you can go. It's a pain in the neck to get to--I don't drive and even if I did, Breezy Point is a private community with no parking for non-residents. To get there, you have to go to Fort Tiden and then hike along the beach for a couple or three miles, except it's not clear that you can do that because the community claims beach is also residents-only (and how that can be legal is beyond me). The books an websites about birding the area suggest wither walking the beach anyway, or taking an ATV path from the fisherman's parking lot. Anyway, it's a hassle, but Piping Plovers. 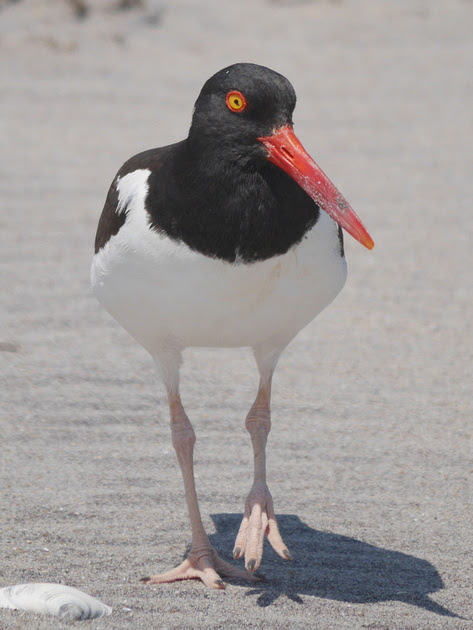 It turned out to be a lot easier than I expected. As soon as I reached the beach at Fort Tilden, I started seeing American Oystercatchers. They nest in the dunes there, and sometimes right on the beach, and there's ropes indicating where you shouldn't go. As I started walking west, I spotted some juveniles, and also some pairs who appeared to be doing courtship--making scrapes on the sand, moving side by side in sync, and so on.

As I was photographing the Oystercatchers, I became aware that the section of beach I was passing seemed to be clothing-optional. You might think that would be important enough to mention in the websites about birding the area (or for that matter the books about NY area birding), but you would be wrong.

After a spirited discussion with a couple of beachgoers about the uses and virtues of telephoto lenses, I continued west, but I hadn't gone fifty yards before I spotted something very small moving in the beach grass. 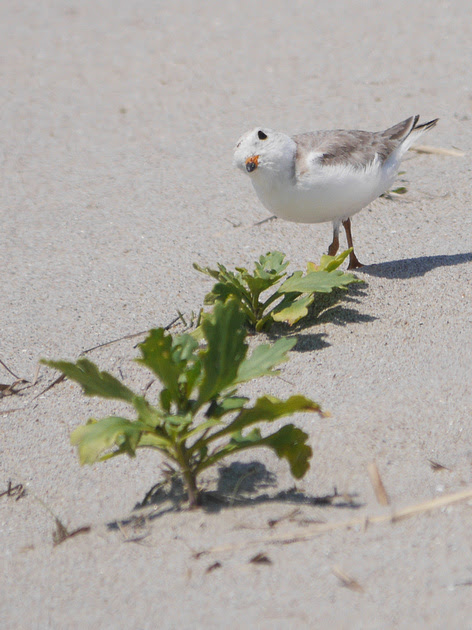 Oooh! Piping Plovers! I had't expected them at all in this area. The dunes here weren't even roped off; one or two people were sitting in the dunes. I actually saw the chicks first: There were about four chicks, I think, and two adults nearby. 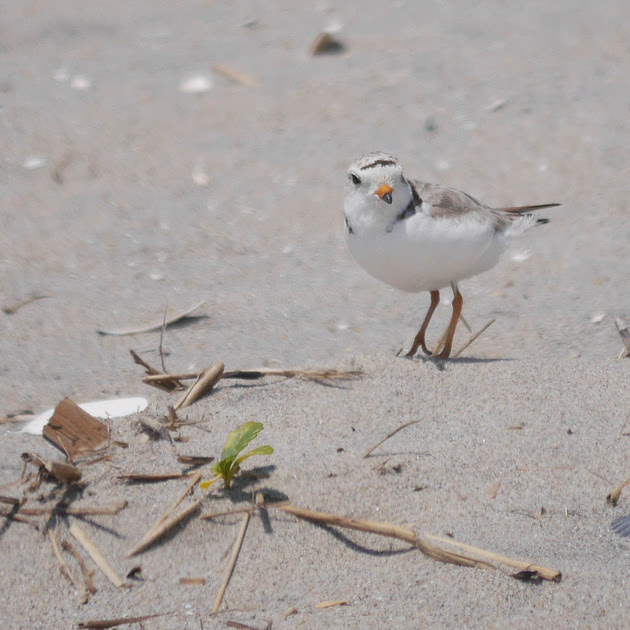 Having seen the Piping Plovers I didn't feel a need to go all the way to the Breeze Point tip. I went as far as the fisherman's parking lot (permit only) and the "Surf Club". The club certainly does their best to make it look uninviting to walk past it own the beach, and I didn't see anything looking like a path leading west from the parking lot. I did walk from the lot up to Rockaway Point Boulevard. Lots of songbirds singing, especially Towhees and Song Sparrows, and some Red-Winged Blackbirds who did their best to convince me I should be elsewhere. I did find them a little more alarming than the sunbathers.

On the way back up the beach, I spotted more Piping Plover adults in the roped-off areas. 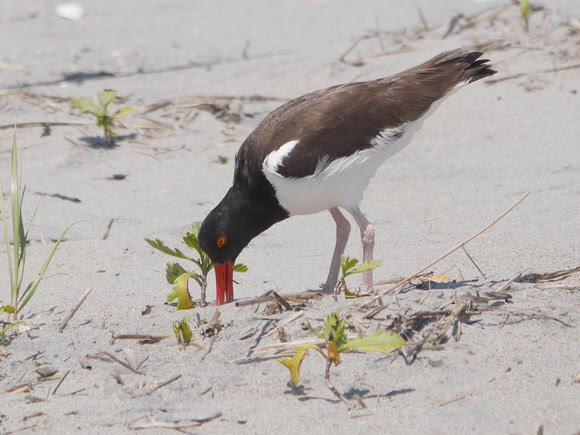 It was a nice visit. Highly recommended. 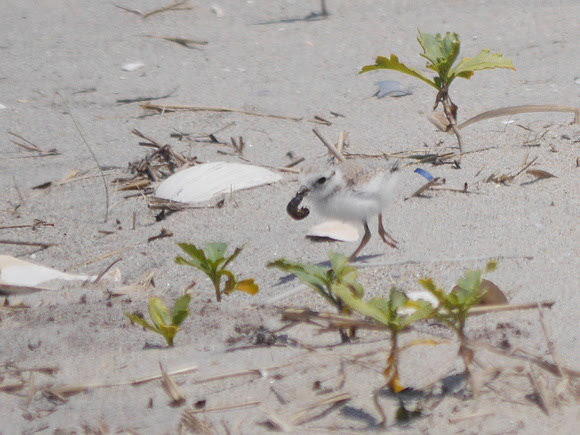 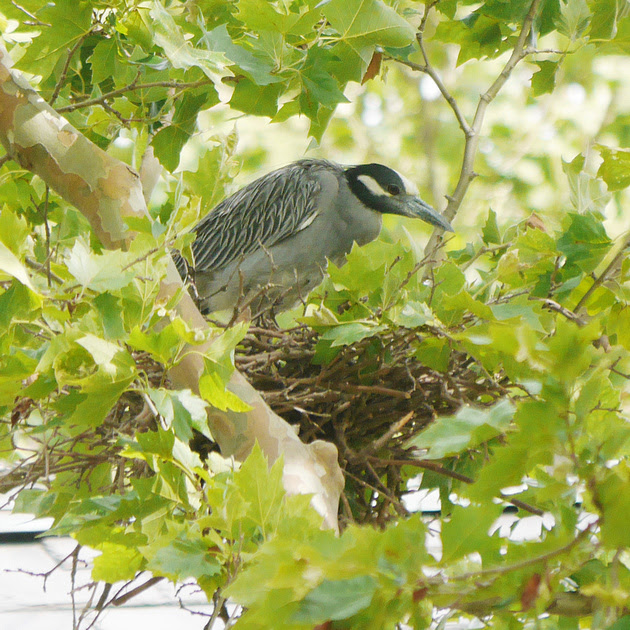 The Heron Is In

It's nesting season! Out on Governors Island, the Yellow-Crowned Night Herons have returned. The nest they used last year was destroyed somehow during the winter, so they relocated to near the Harbor School. These photos were taken near the end of June I wonder if they've got hatchlings yet. time for a stretch and a scratch

The Common Terns seemed to be doing well; their nest colony isn't in plain view at their new location (their half of Yankee Pier collapsed during the winter and they're now on Tango Pier, which is entirely closed to people) but I could see one fledgling on the pier. Too far for a decent photo, though.

Some birds have fledged their young already (at least their first round, many will renest). Here's a baby Cardinal from Central Park: 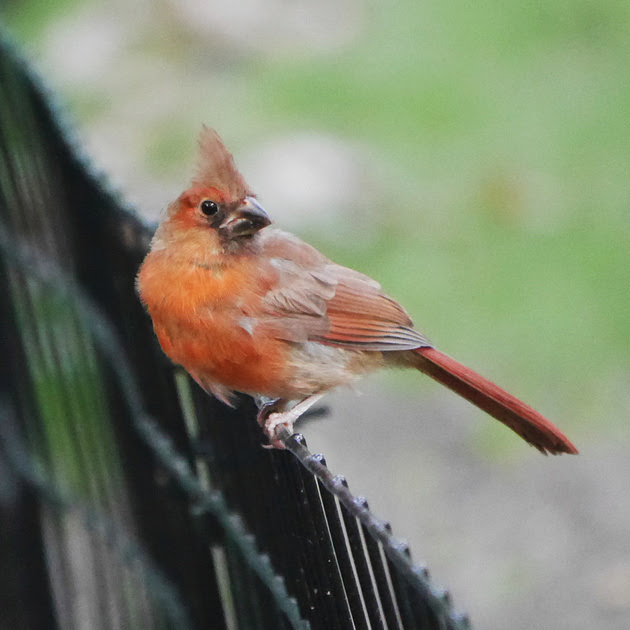 the dark beak is a sign of youth in a Cardinal

and a recently fledged Blue Jay: 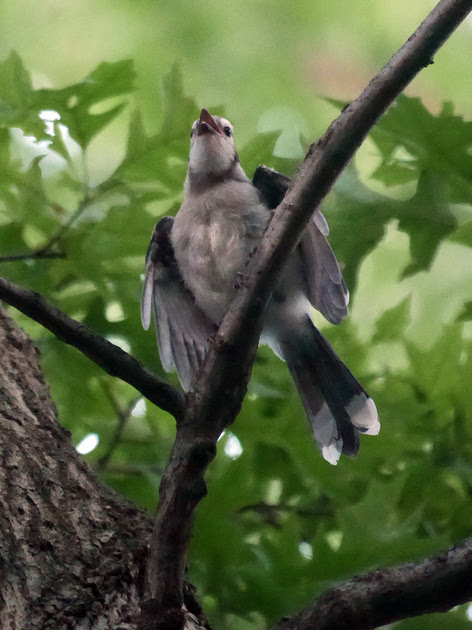 
and the Common Grackles have had a good year so far: time to feed the baby kids are so demanding