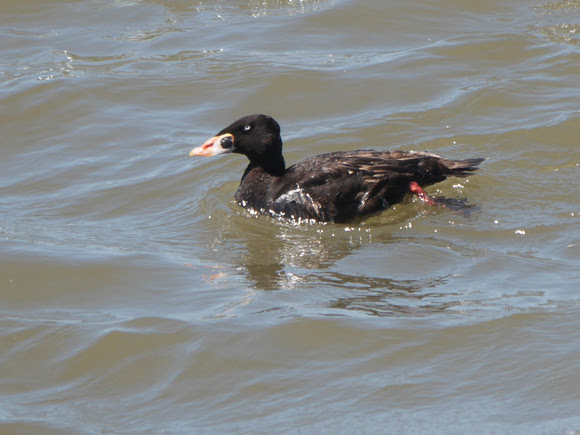 One thing about birding is, you never know what's going to turn up.

Saturday I went out to Governor's Island. I wanted to look for this year's Yellow-Crowned Night Heron nest, which I had a heck of a time finding, and check on how the Common Tern colony was doing, and see what else might be around. 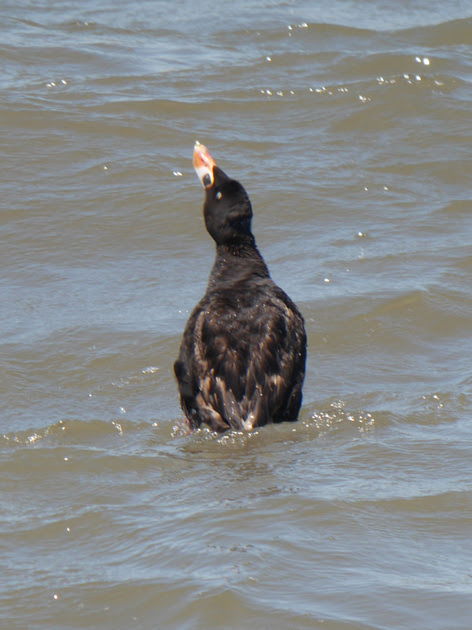 I found a nest up a tree sort of in the area the Heron was supposed to be, and watched it for a half-hour or so. It turned out to be the wrong nest. Oh well. Since I was close to the west edge of the island, I took a break to see what might be on the water. I spotted some terns and Laughing Gulls down the shore and decided to stroll over there and try to get some photos of the birds fishing. I was interrupted by a couple who wanted me to take their picture. 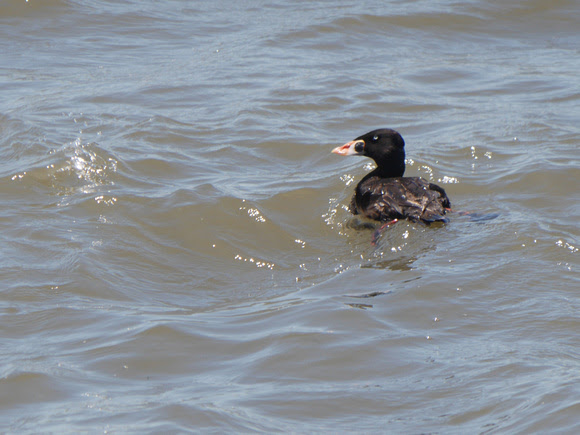 It pays to be polite. It was only after I had finished that that I spotted an odd black duck swimming south maybe twenty yards out. I might have missed it if I had gone trotting off towards the gulls. It turned out to be a Scoter, which is unusual in this area in June--they should all be up around Hudson's Bay--and almost unheard of in New York County at any time. Almost all of the eBird sightings are from right after Hurricane Sandy--water birds often get blown great distances in storm systems. 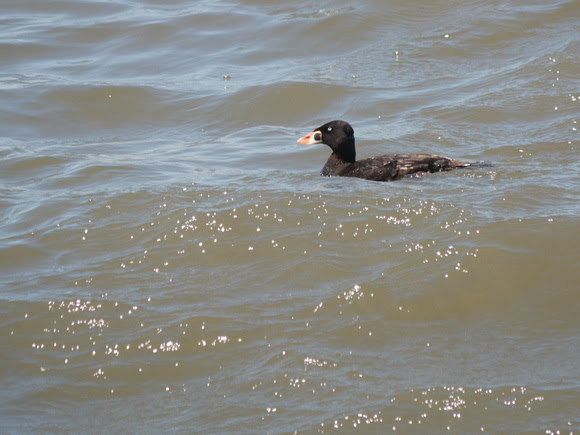 This bird is a Surf Scoter, I believe--the bill is quite distinctive, though Surf Scoter males usually have big white patches on the forehead and nape of the neck (fishermen call them "skunk coots"). However, I think young males can show this all-dark plumage, and that black spot at the base of the bill really doesn't occur in other Scoters. This appears to be the first sighting of a Surf Scoter at Governor's Island. It's also probably the coolest bird I've ever found myself.

I eventually found the Yellow-Crowned Night Heron nest. I'll talk about that some other time, though.

Looking back at Spring (part 2) 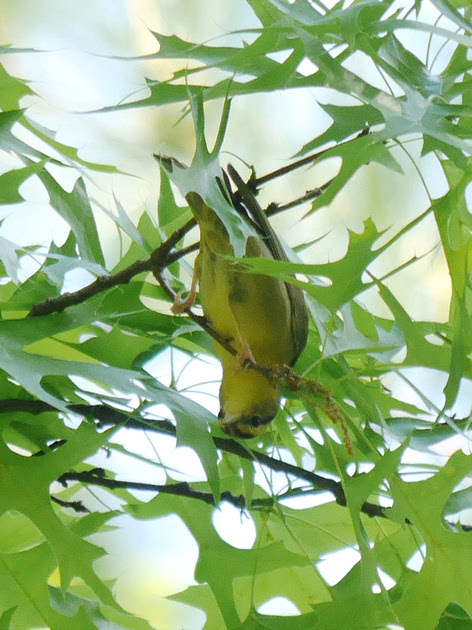 Another bird I got a better-than-usual look at this Spring was Worm-Eating Warbler. Usually they're hard to find in Central Park in the Spring, but this year there were several good sightings, mostly along the south short of Turtle Pond. 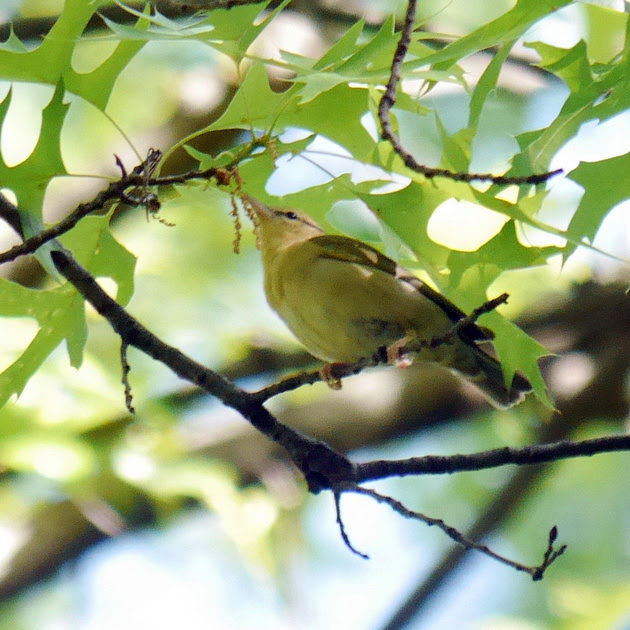 Worm-Eating Warblers are more frequent in the park in Fall, when they tend to creep through the dead leaves on the ground in shady spots. They are pretty cryptic in that setting. These Spring migrants, though, liked the catkins in the oaks, pretty high off the ground but sometimes coming down almost to eye level. The oaks at Turtle Pond are set well back from the fenced path, but it was still a pretty good view. 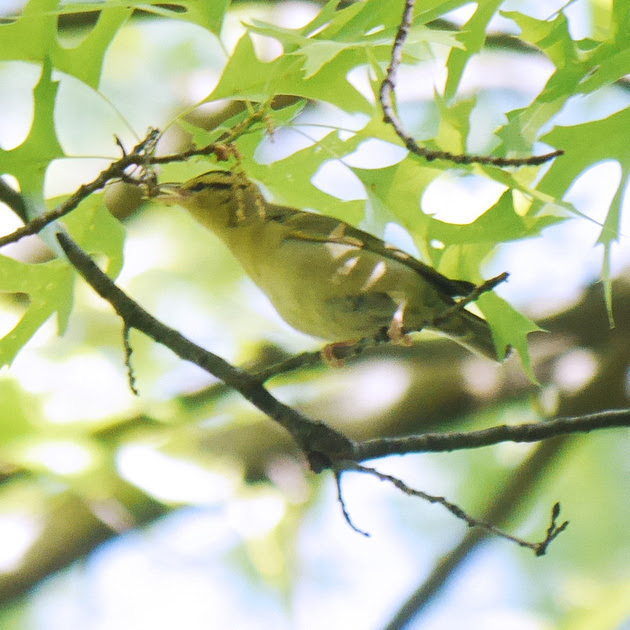 because of the distance and light, these photos didn't come out quite as well as I had hoped, but it was still quite a nice view of the bird.
Posted by ed g. at 3:37 PM No comments:

Looking back at Spring (part 1) 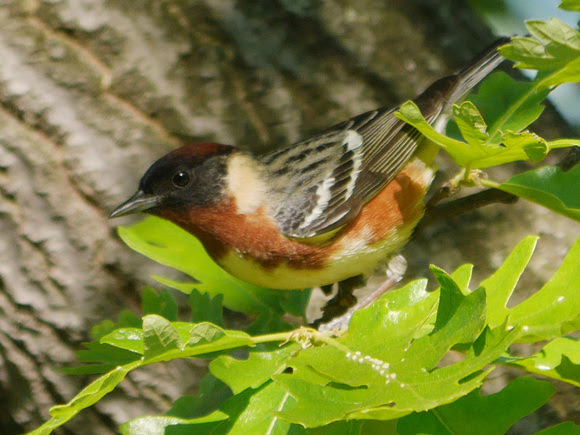 So how have you all been? Had a good Spring migration? Mine was good, but I didn't have my act together to post about it. Too many photos, too little time. I really need to come up with a better workflow. And now Summer is beginning, and the migration has passed, and it'll be another year before I get to do it again.

Anyway, it was a pretty good migration season. There were a lot of birds, although some of the "normal rarities" didn't show up much--I don't think anyone had a Prothonotary or Cerulean Warbler, for example, not in Central Park, maybe not anywhere in Manhattan. 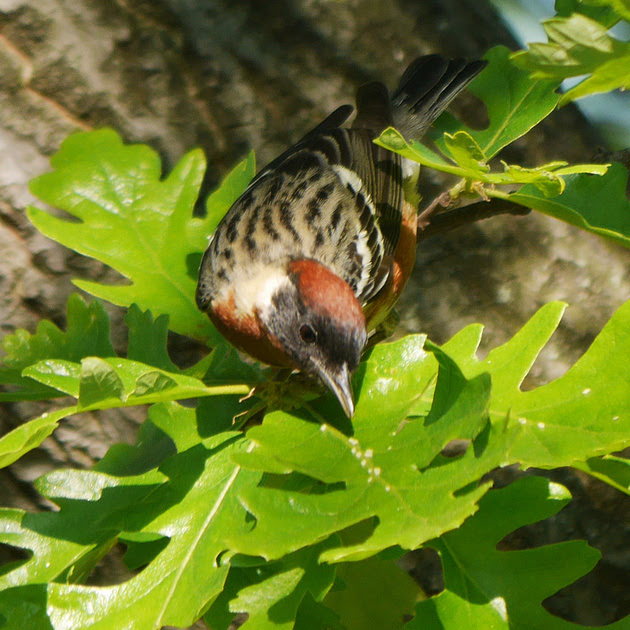 I never ran into a real "magic tree", but I did have a nice long encounter with a Bay-Breasted Warbler, right where the Belvedere Caste plaza ends and the steps down to the Ramble start. 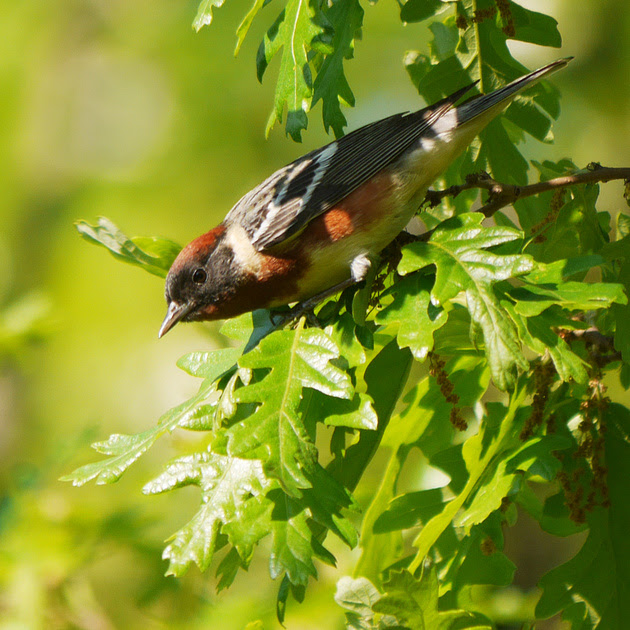 He foraged in one tree for a good half-hour, frequently at eye-level, and in really good light. I was amazed how his cap glowed in the sunlight. 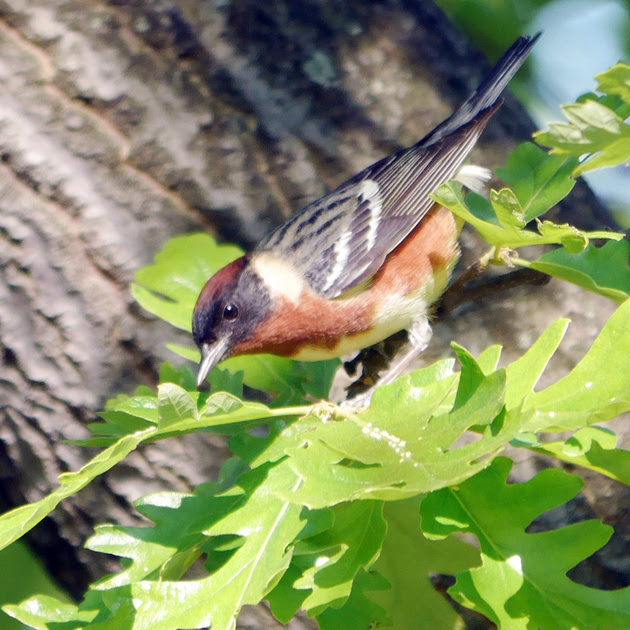