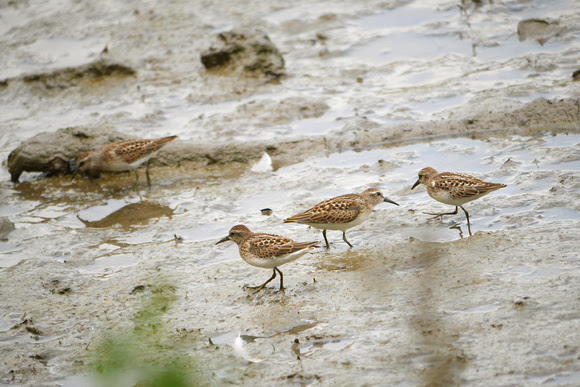 without context, they don't seem so small

Shorebirds are hard to find in Manhattan. Solitary and Spotted Sandpipers usually come through central Park on migration, and you can find Kildeer on Randall's Island sometimes, but for the most part you need to get out of Manhattan for them--Jamaica Bay, for example.

So it was interesting when people started reporting Least Sandpipers in Spuyten Duyvil Creek at Inwood Hill Park a couple of weeks ago. I went up there several times, and gazed upon mud flats filled with...gulls. Hmph.

Finally, last Thursday, I went up again at low tide. I walked around the cove and the Muscota Marsh that Columbia University is restoring. No sandpipers in sight. I rested on a bench a while, made some phone calls, got ready to go home. When I arose to take a last look at the cove as the tide came in, I say little birds scrambling around on the mud. Sandpipers, huzzah!

Six of them , Least Sandpipers with greenish legs, thin bills, sort of blurry streaking across the breast. Very cute, running around probing the mud, sometimes running into each other when they got out of the way of a larger bird passing through. 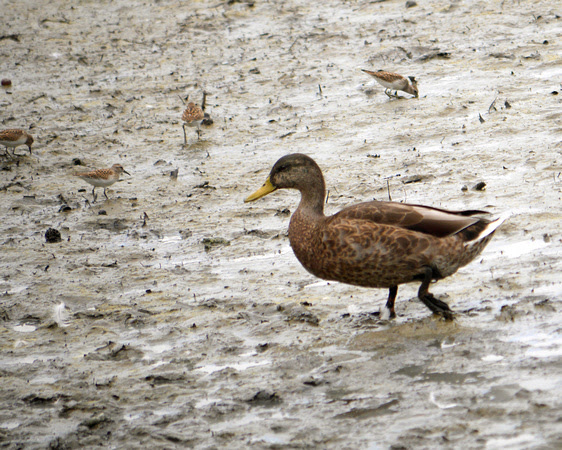 with context, you see why they're the Least Sandpipers

This shot with the duck strolling by will give you an idea of their size. Teensy little birds.

Since then, I've been seeing reports of Semipalmated Sandpipers in the creek, and Semipalmated Plovers across the island in Sherman Creek Park, so I'll have to try to get up there again soon.
Posted by ed g. at 11:50 PM No comments:

One of the days I was waiting for the Hooded Warbler to show up, I got to watch an American Redstart have a quick lunch. I love this kind of thing. 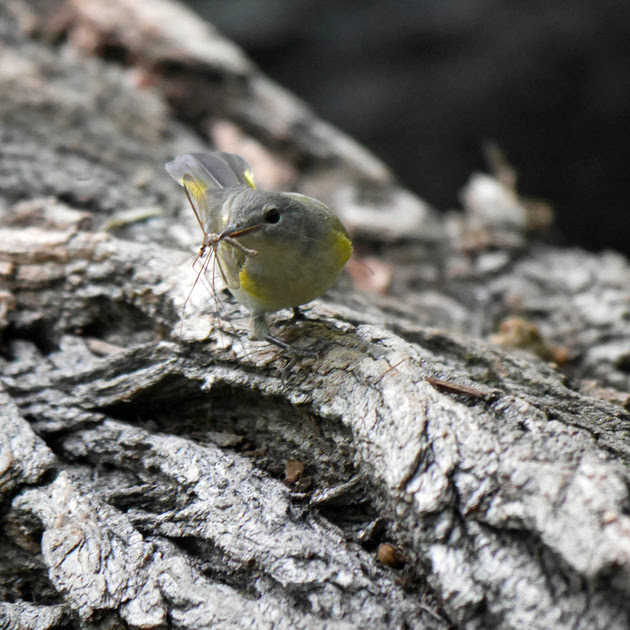 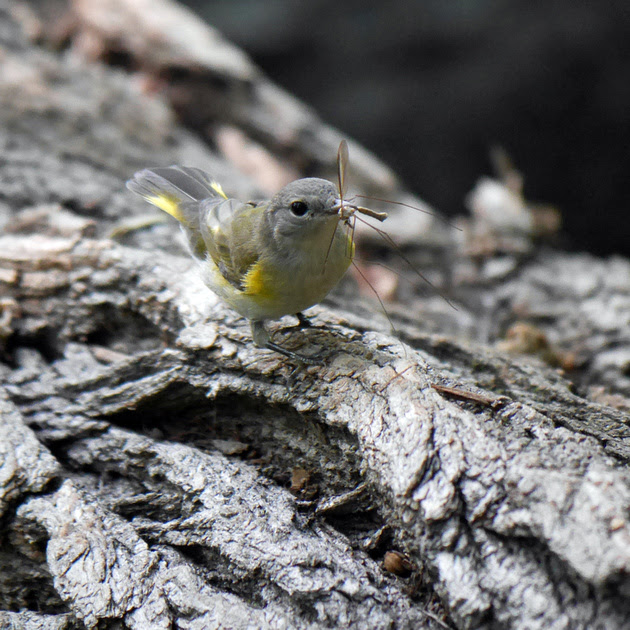 OK, now what?
I can't quite figure out what she's eating. I thought at first it was a cranefly, but it's really not. Not a mosquito, either, I don't think. 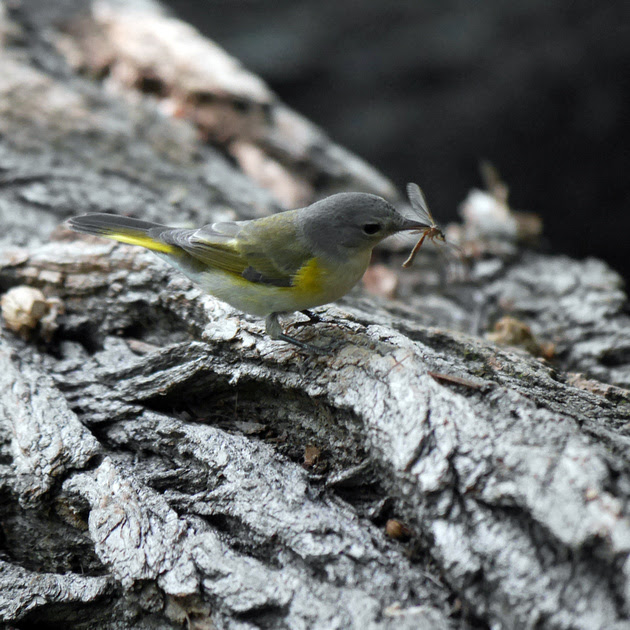 Let's try shaking it to quiet it down 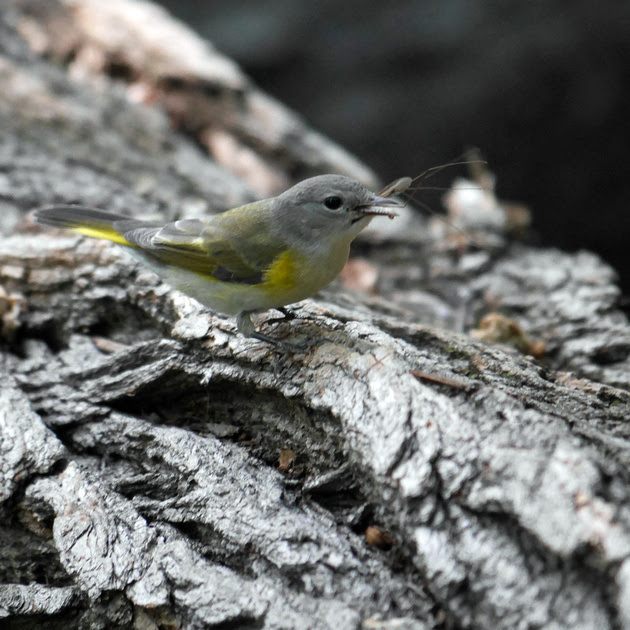 Now I've got a handle on it 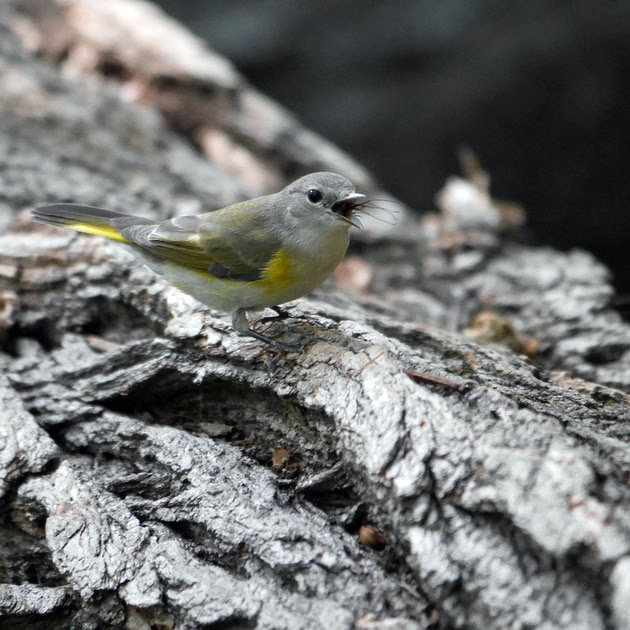 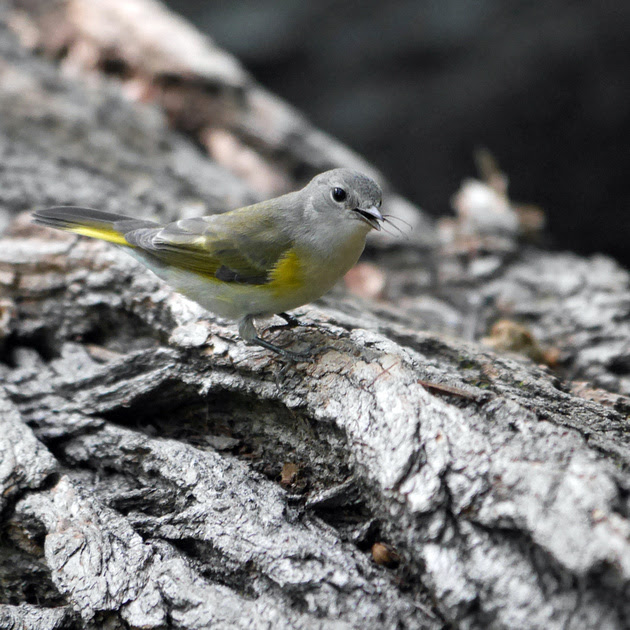 Oh, that's tasty!
She seemed quite satisfied, and flew off.

Email ThisBlogThis!Share to TwitterShare to FacebookShare to Pinterest
Links to this post
Labels: birding, Central Park, nature red in tooth and claw, photo

Hooded Warbler, or the frustrations and joys of bird photography 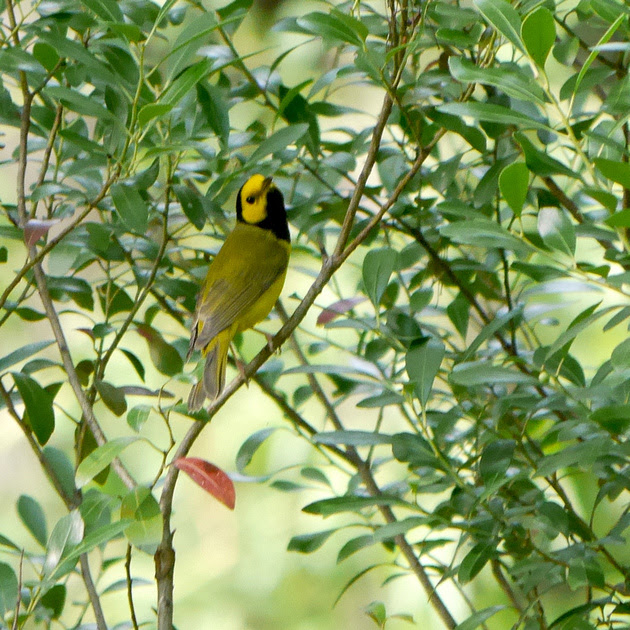 my best shot of this bird, from the second day
Sunday, I went into Central Park and ran into Pat Pollock, who told me that a Hooded Warbler--a beautifully-marked male--had been seen in the Ramble between Laupot Bridge and the Rustic Shelter. That's a small area with a lot of logs down in it, very nice terrain for a Hooded.

When I arrived, a couple of other birders and I quickly spotted the bird, very active around the logs. 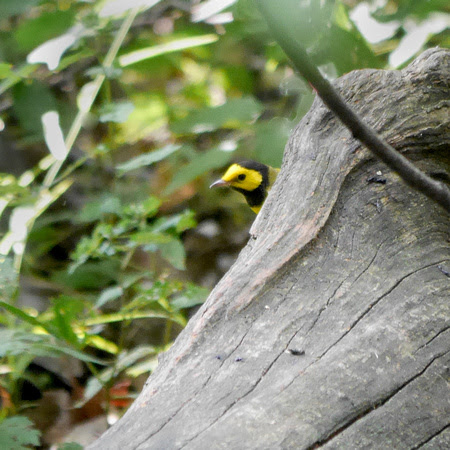 peek-a-boo!
At one point he popped up with an insect in his beak. There was a moment's pause in his activity, and I got in a couple of snaps. 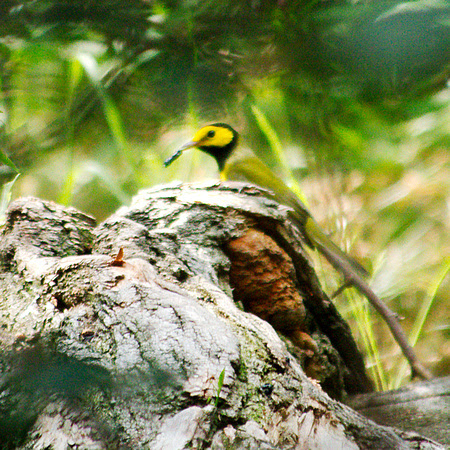 fuzzy meal
Normally, I don't like to blame my camera for my poor results. But I don't understand what happened with the autofocus here--he was right in the middle of the frame (the version here is a heavy crop), right under the center focus point, and he's quite contrasty, so the camera's (Panasonic GX-7) focus system should have been happy.

The warbler disappeared after that, but since people told me he had been circling the area all day, I waited for another opportunity. Unfortunately, about twenty minutes or so later, another photographer walked into the area trying to get an angle on another bird singing in the treetops. I think that spooked him, and he didn't come back in the next half hour before I moved on.

However, another birder found him later that afternoon, and he was reported in the area again on Monday morning, so off I went again. I met Annabella and Sol, two of the regular birders, looking for him. They moved off to the other side of the stream near the bridge, where the bird had also been reported.

A bit later, I happened to glance that way, and saw a flash of yellow in a bush. That's when I got the photo at the top of this post. I called out, and Anabella and Sol got their eyes on the bird as well. 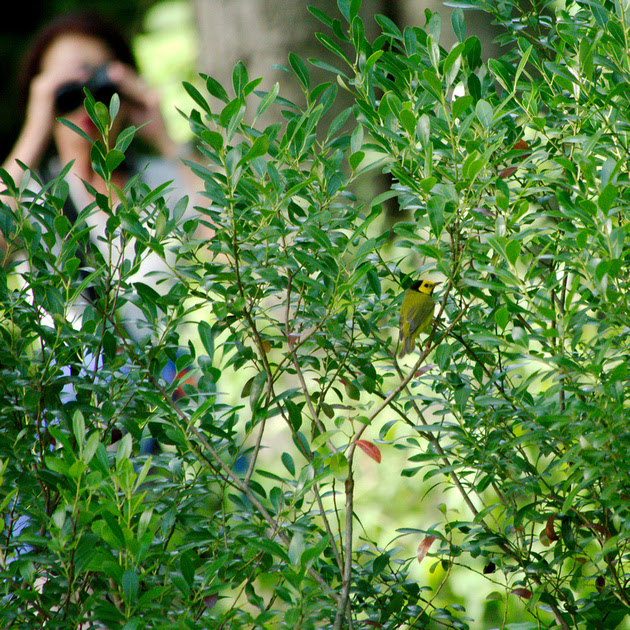 birders in front of me, birders behind me...
We tracked the warbler around the area. At one point it was in perfect light, maybe eight to ten feet away, and...my camera refused to focus on it. (I should point out that the lens I use for birding is not great for manual focusing.) Bah.

Of course, sometimes the camera (and the cameraman) work flawlessly: 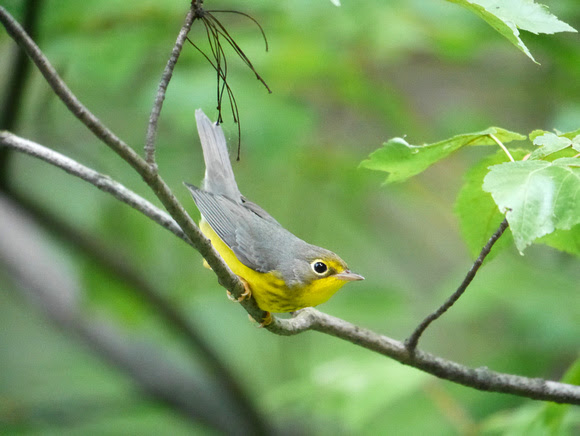 Canada Warbler, posing about 8 feet away. Uncropped.
On Monday and Tuesday I also saw a Worm-Eating Warbler and my first-of-season Swainson's Thrush at Tupelo Meadow, several Blue-Winged Warblers, and as I left the Ramble on Monday about 6pm, a Common Nighthawk. The Nighthawk was flying low over the 79th Street Transverse toward Turtle Pond. Beautiful long, sharply-tapered wings with white bars underneath. It appeared to be evading some Robins, so I think it had been chased off it's daytime roost. I went to Turtle Pond, and found a several birders watching pale Male roosting in a tree. They hadn't seen the Nighthawk, and really it could have ended up anywhere.  A thrilling sight.
Posted by ed g. at 11:56 AM No comments:

I saw my first Ovenbird of the Fall season on Friday, at the northern end of the Ravine. It was pretty skulky, so I didn't get a photo.

Up at the Mount compost area, I saw an odd bird flocking with House Sparrows. It was pretty far away, and trying to circle around to get a better look was even more of an adventure than usual, since the path behind the dump is completely overgrown now. In fact there was no view of where the flock was foraging from that side. Examining the awful photos I was able to get from farther away, I think it was just an immature or female Red-Winged Blackbird, AKA "bird most likely to be confused with an interesting sparrow". Oh well, the frustrations of a mediocre birder.

There were a bunch of Mockingbirds around the compost area, at least four adults and four juveniles; probably more. I got a nice picture of one of the young birds. 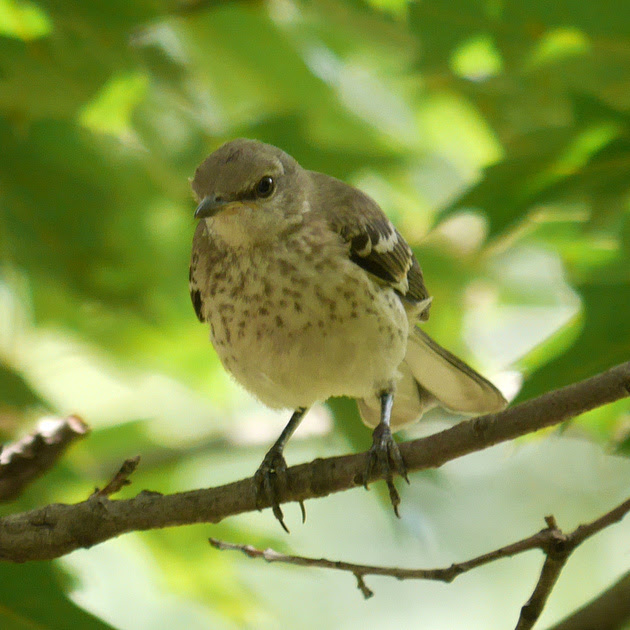 bashful
I also saw a lot of Blue Jays there, and one came up and posed for me. 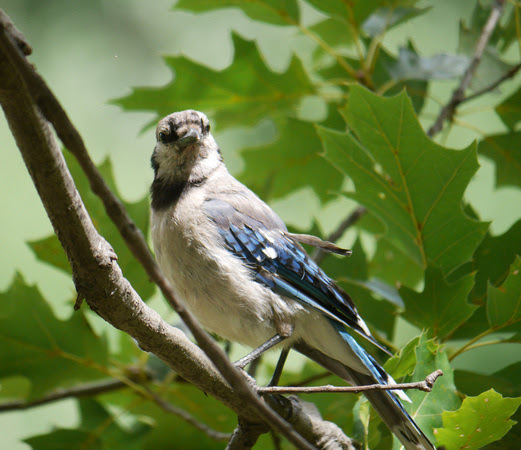 why yes, I am a very handsome and noble bird, thank you for noticing
Barn Swallows were swooping all over the place as well. They weren't inclined to pose.

I wound up the day at the Pool, where I saw a group of very young Mallards just past the fluffy-ducking stage. 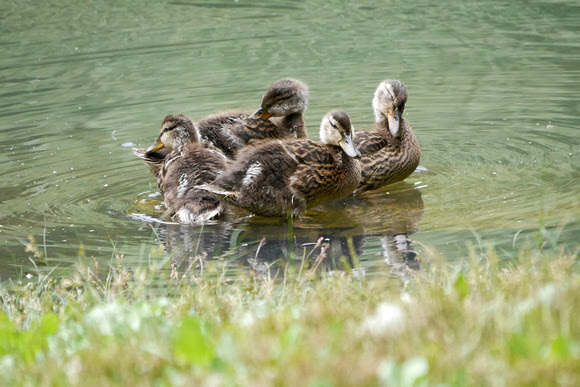 who doesn't love a picture of baby ducks?
Posted by ed g. at 1:24 AM No comments:

By now, many of the birds nesting in Central Park have finished raising their young (some, like the Robins are on their second or third brood, in case you were wondering why there are so many Robins in the world). I've been seeing the inevitable young Grackles, Starlings, Cardinals, Mallards, and so on, and also young Orioles, Waxwings, and this charming little Warbling Vireo: 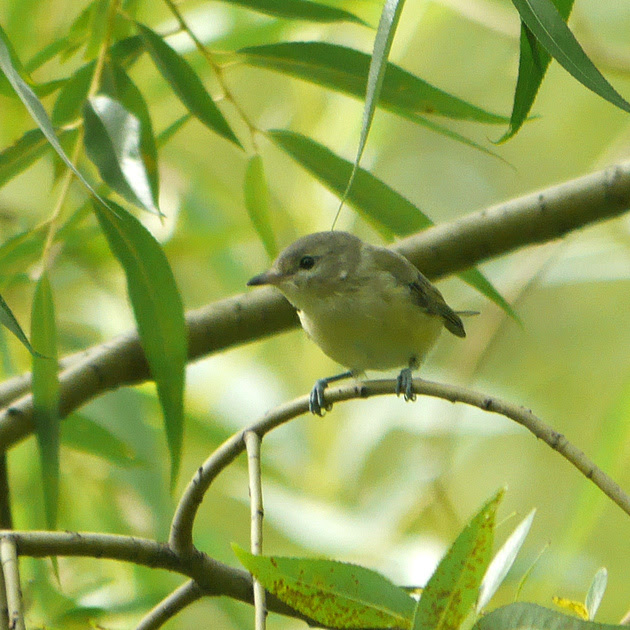 baby Warbling Vireo, in the big willow at the Upper Lobe
There were some Cardinal juveniles around as well, chasing about and begging food from any bird in the area, including each other and the little Vireo.

A few days before that, I saw one of the parent Vireos in the same spot: 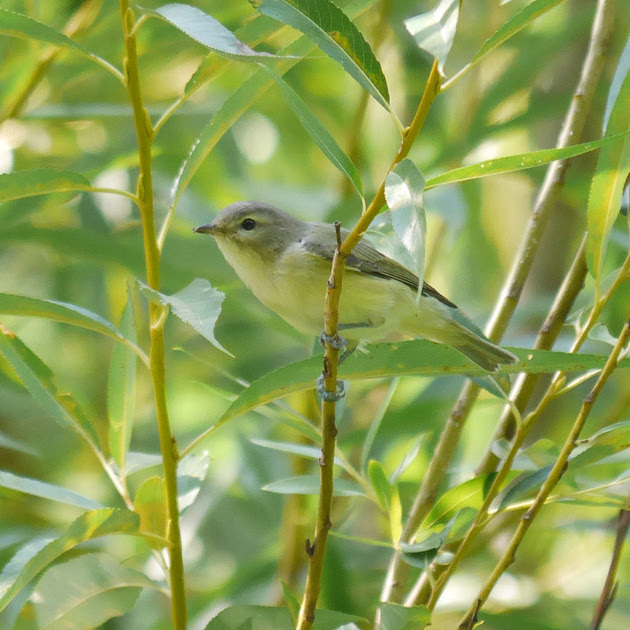 adult Warbling Vireo, in the big willow at the Upper Lobe
Warbling Vireos are usually quite hard to get a good photo of, so I was happy to see this one being so cooperative.

Migrants continue to move through. On the rumors-of-warblers front, a Cerulean (adult male!) was reported around the Upper Lobe on Sunday, and a Prothonotary on saturday at the Point. These were unfortunately not refound. There have been several reports of Worm-Eating Warblers. Elena and I had a Canada Warbler on Saturday at Azalea Pond, a bit early, and of course Black-And-White Warblers, American Redstarts, and Northern Waterthrushes are in.

Also on Saturday, we had the Olive-Sided Flycatcher at Azalea Pond again, and a Great Crested Flycatcher near bank Rock Bridge. 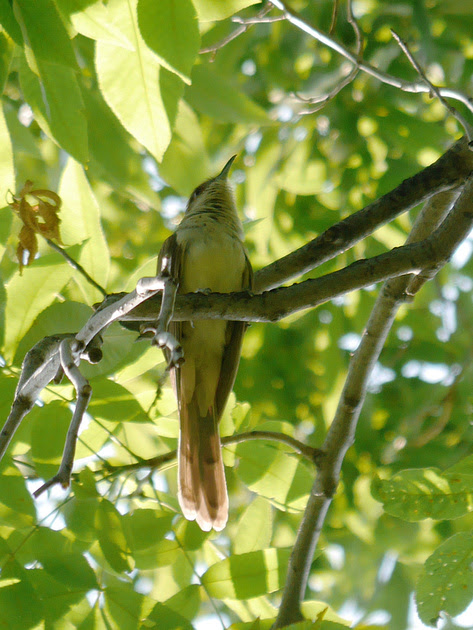 Goodness Gracious, Great Crested Flycatcher!
Posted by ed g. at 12:37 AM No comments:

Fall migration has been a bit earlier than last year. I've had several warblers--both Waterthrushes, Black-and-White, Parula, Yellow, Redstart--and there's been reports of others, notably Worm-Eating. Last year was all Northern Waterthrush until this point in August. 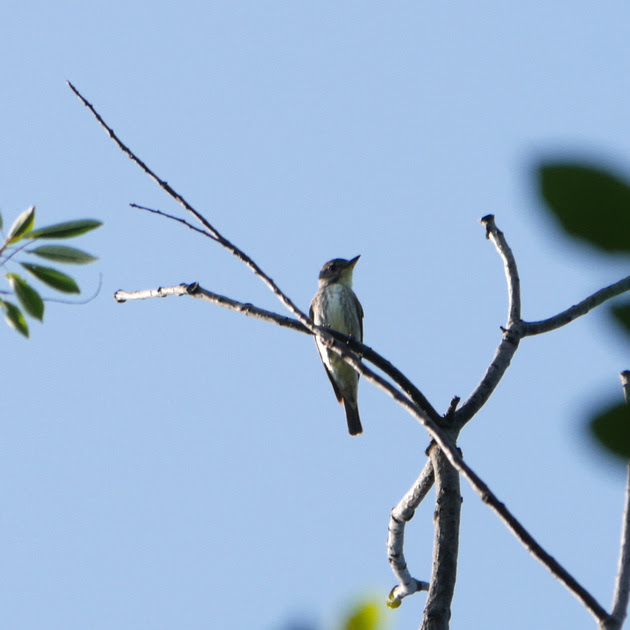 big flycatcher on top of a tall bare branch, that's our bird!
And yesterday, a nice young man named Adrian Burke pointed me at an Olive-sided Flycatcher! It was on the tall snag at the southeast corner of Azalea Pond, where Olive-sideds like to perch when they come through, and it's the earliest Fall record in eBird for the species in Manhattan that I can see. 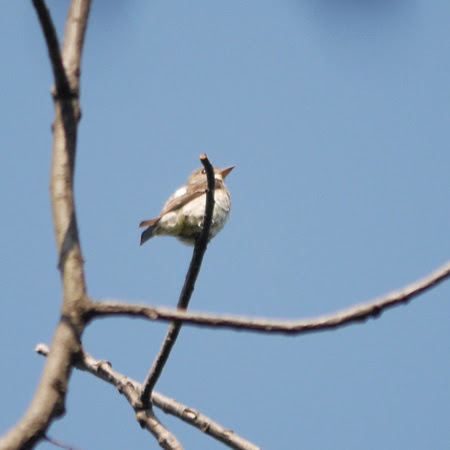 not a great shot, but  tufts of white feathers on the back is a good mark for Olive-sided
Keep watching the skies. And the trees. And the shoreline.
Posted by ed g. at 11:47 PM No comments: