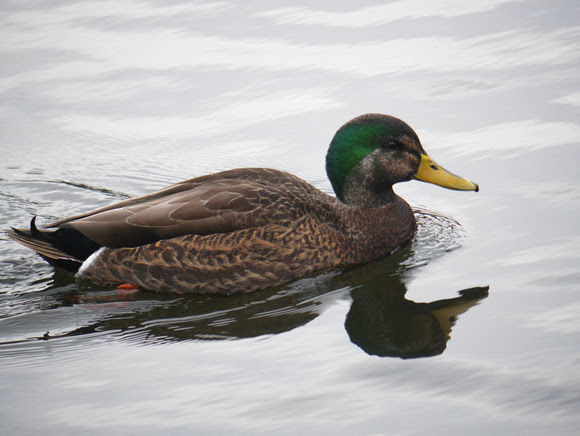 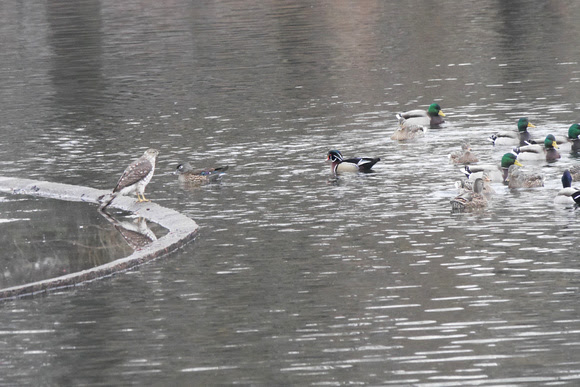 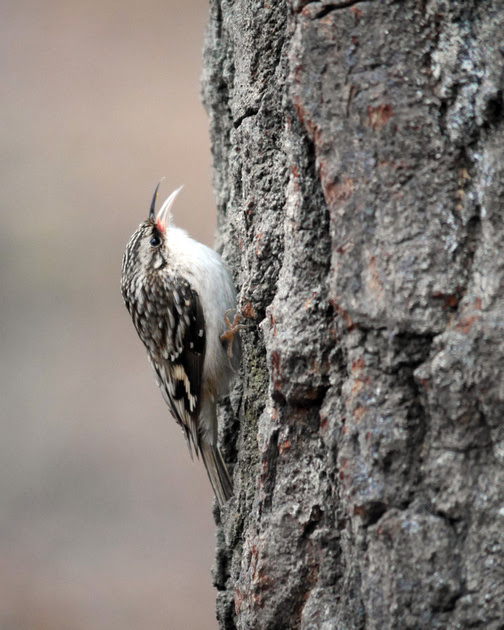 Last week, while I was twitching the Varied Thrush in Stuyvesant Town, a Long-Eared Owl was giving people great views near Turtle Pond in Central Park. It was gone the next day. Then, at a Christmas party, a knowledgeable acquaintance told me of a spot nearby where such owls often roost in winter. I went a few times; no luck.

Saturday, I went up to Randall's Island again. It was pleasant enough--some Brant, a Peregrine Falcon, a Sharp-Shinned Hawk--but nothing new. Then I saw online that a Long-Eared Owl was in Central Park again. I made my way to the Ramble, and was told that on Friday there had been three at a certain location (I am following the convention that one doesn't discuss the exact location of active owl roosts, though I don't think it makes much sense for most owls in Central Park), and there was still one there.

Well, there was. Quite well-hidden in the top of a pine tree, a really terrible view mostly of owl butt. But it was a good enough view for David Barrett, so I guess that's my 176th species this year in New York County.

Not a very satisfying bird, though. Maybe it will be around tomorrow.

On the afternoon of Christmas Eve, I made my first trip to Randall's Island, having finally figured out that since I'm not working, it's no more out of my way than anywhere else.

I went to the northern end of the island. It was empty and desolate. A lone man sat on the bench of one of the baseball fields. Once in the almost three hours I was there, a woman rollerbladed past. Otherwise, just me and the birds.

I was greeted by the rattle of a Kingfisher, a female, who perched on the Bronx shore near the bridge and swooped over to the island. (And swooped back, eventually; repeat.) Gulls and pigeons commanded the roof of the New York Post printing plant across the river.

A flock of about a hundred Canada Goose, and nearby about 170 Brant, all rested on the water. The saltmarsh itself was pretty quiet--there were a couple of American Tree Sparrows and a Song Sparrow lurking in the shrubs.

Out in the broad East River, two Double-Crested Cormorants fished, and on a small rock to the north-east, four Great Cormorants rested with three of their smaller cousins. The Great Cormorants are my 175th New York County species of the year.
Posted by ed g. at 12:06 AM No comments:

I'm not very good at raptors. There! I said it. High-flying hawks are hard to distinguish from my floaters, and even ones lower down confuse me with what seems a steady gradation of plumage types. Sparrows are actually easier.

Friday I was just about to head home from Central Park after a pleasant though unexciting afternoon--Mute Swans on the reservoir was the high point, and why exactly can't the Conservancy send a couple guys out to spread sand on the east side of the Reservoir track to help the dangerous icy footing? But I digress. I was at the 79th Street Transverse fence near Maintenance, scanning the pines across the road for owls, when I spotted a hawk circling over Turtle Pond.

I was expecting another Red-Tailed, but the bird I saw, though a fairly chunky hawk with wide wings, had a tail thickly banded black and white and a black terminal band. Not a Red-tailed. Light underside, maybe some streaking near the throat but no belly band, liight-coloref undersides of teh wongs with some dark banding but not dark tips or edging; dark (warm brown) head. After a couple of circles as I watched, it flapped twice and glided away north over the Great Lawn. This was not the flap-glide flight of an accipiter, it was a long soaring glide with the flap seemingly only to change direction out of the circling. The wings were held flat and the glide was pretty steady (it was not windy, at least on the ground).

So I have no idea what that was. My immediate through when I saw it was a Broad-Winged, but it lacked the black wing edges. Dark head and banded tail made me think about a female Harrier, but the flat-winged soar and glide doesn't seem right, and teh wings were perhaps too wide. In fact, I can make objections for each banded-tailed hawk. 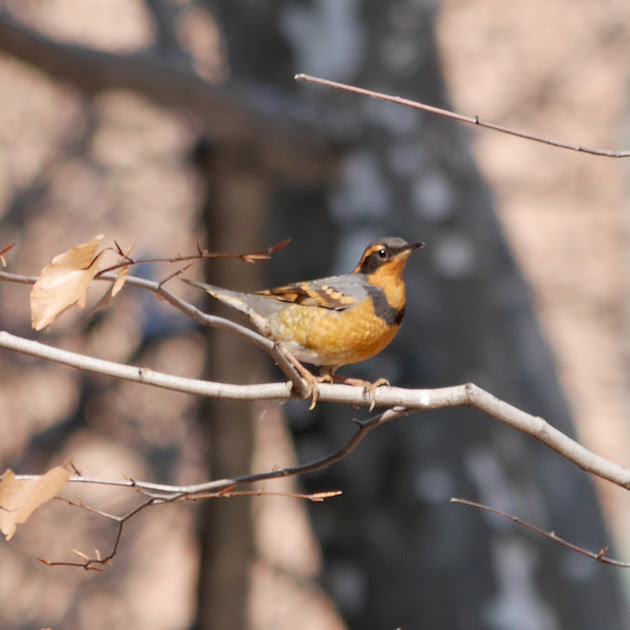 Finally made it down to Stuyvesant Town to see the Varied Thrush first seen by Ann Lazarus on Sunday. A beautiful day for it. I went in from 18th Street and First Avenue as suggested on NYSBIRDS-L and quickly located a group of people staring intently into some shrubbery. That's always a sign.

They pointed the bird out to me, hiding in some evergreen shrubs, just before he moved--into clear view for a few seconds, then disappearing into more shrubbery.

Then the waiting began. Juncos and White-Throated Sparrows foraged peacefully. People stopped top ask what we were all looking for. probably a couple of dozen in all, and they all seemed actually interested in the explanation.

A Hermit Thrush bounced across the area, and then a Robin flew out of the bushes we were staring at. Eventually, the right bird came out and perched in a tree close to the building, in shade. I got a few shots off, and then he flitted only a well-lit branch of a plain tree and I had time for two good frames before he flew up and father away into a more shadowed tree. I lent my binoculars to one of the curious passers-by then as I watched with the camera hoping for another good opportunity. Shortly afterwards we lost track of him.

I stayed a while longer--the bird didn't reappear--and decided to call it a good morning's birding. I see on the email list that he came back.

The last time I recall a Varied Thrush in Manhattan was January 2011. That one stayed until March, so I'm guessing there's time to see this one if you haven't done so. Very good-looking bird. 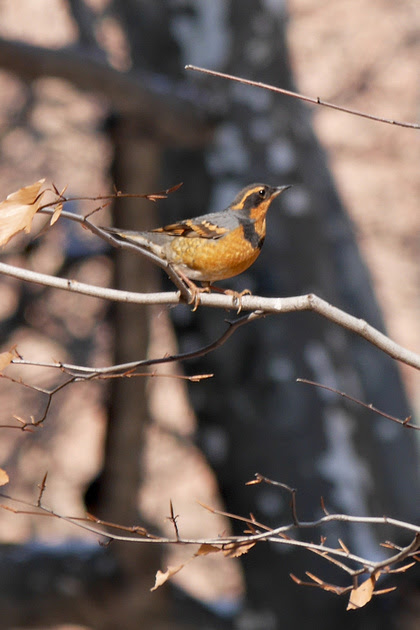 A Varied Thrush was reported on Sunday in Stuyvesant Town and was still being reported today. I haven't made my way down to see it yet--still recovering from Sunday--but I will try tomorrow. I'm not too worried; the last Varied Thrush I recall in Manhattan visited in early January 2011 and stayed until February at least. That was this bird: 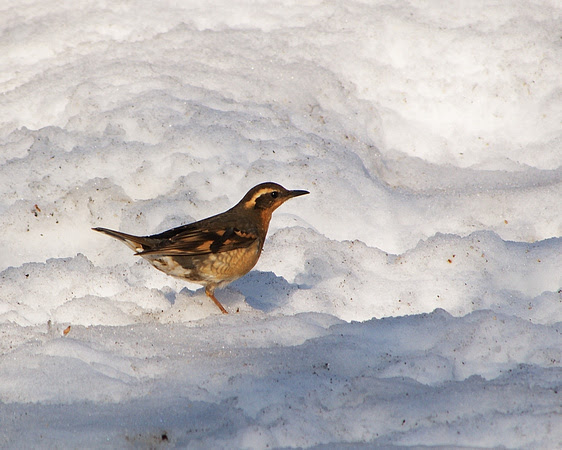 which was a female, possibly immature. The current bird is an adult male; Anders Peltomaa got a very nice picture yesterday.
Posted by ed g. at 8:01 PM No comments:

My best picture of the day was probably this Green-Winged teal on the Reservoir: 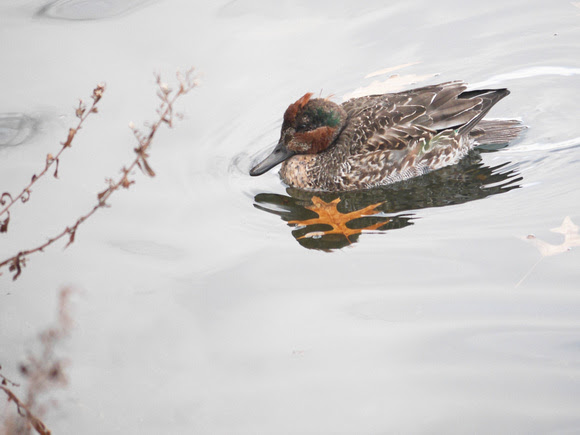 Here's the group of Scaup I ran around up to the Reservoir for after the Christmas Count tally: 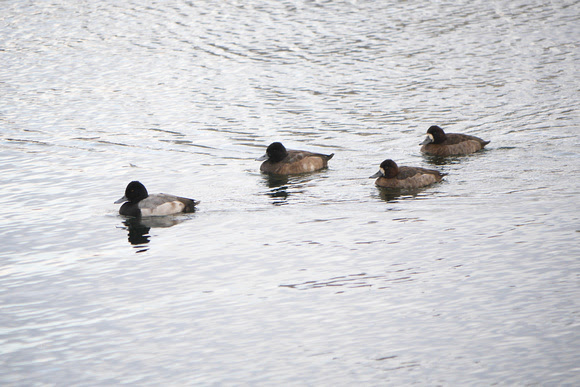 The Count itself was pretty quiet. We had a lot of Blue Jays: 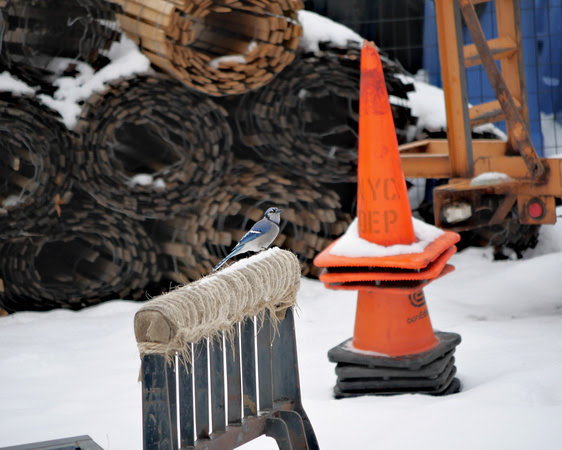 National Audubon Society President David Yarnold was also in the Great Lawn group I was part of, and spoke to the post-count tally meeting at the Armory: 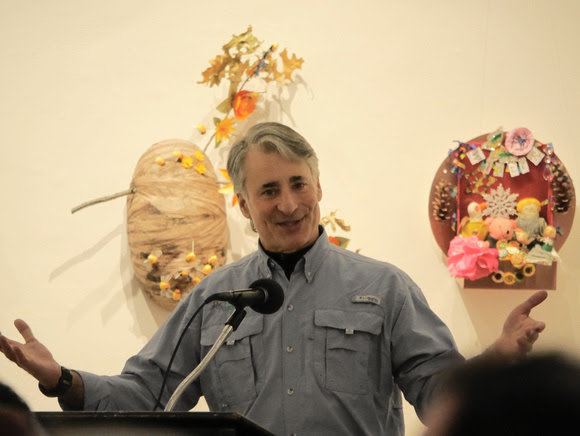 I decided to take part in the Christmas Bird Count this year, my first time.  So I got up early and walked to the 86th Street bus in the dawn light.  Overhead, a flight of Crows headed for the East River.

Entering Central Park, I heard a strange stuttering birdsong:  di-di-di-di-di-di-di-di (pause) DI-DI (long pause and repeat).  I have no idea what that was;  my best guess is a Mockingbird imitating a car failing to start.

I reached the meeting place at the Reservoir's south pumphouse.  Someone explained to me that we would divide up into groups that would go to various parts of the Park under the guidance of a park ranger and an experienced birder;  choice of which group was ours.

It snowed yesterday and then rained all night, and the footing was treacherous, so I picked the Great Lawn group;  that area is mostly flat.

We set off around 8:20 for what proved to be about three hours of quite uneventful birding.  Probably the bad weather was keeping the birds quiet.

I don't like birding in large groups ("large", to me, is anything more than about four), but the company was pleasant.  A fellow named Dave struck up a conversation with me, asked me about my binoculars and how I got into birding and so on.

When the count ended and the group headed for the Central Park Armory to collate results and have lunch, the conversation turned to photography.  Dave had been a photojournalist and we talked about street photography and Diane Arbus. Very enjoyable conversation.  When we got to the Armory, Dave introduced himself to the table as Dave Yarnold, President of the National Audubon Society.  I had no idea.

When the count was compiled, I learned that a group of Lesser Scaup was on the Reservoir, so I ran off to see them;  my 173rd species in New York County this year.