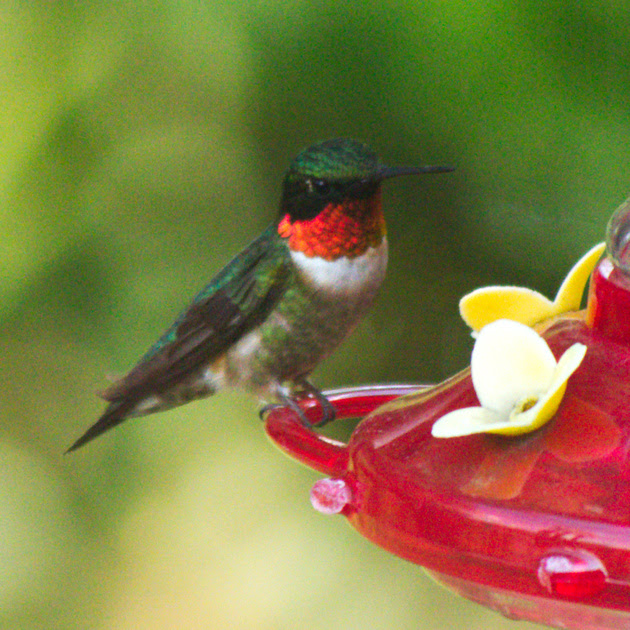 Ruby on rail
Our other road trip this summer was to Quincy, Massachusetts for our favorite science-fiction convention, Readercon, which I blogged about a couple of years ago. 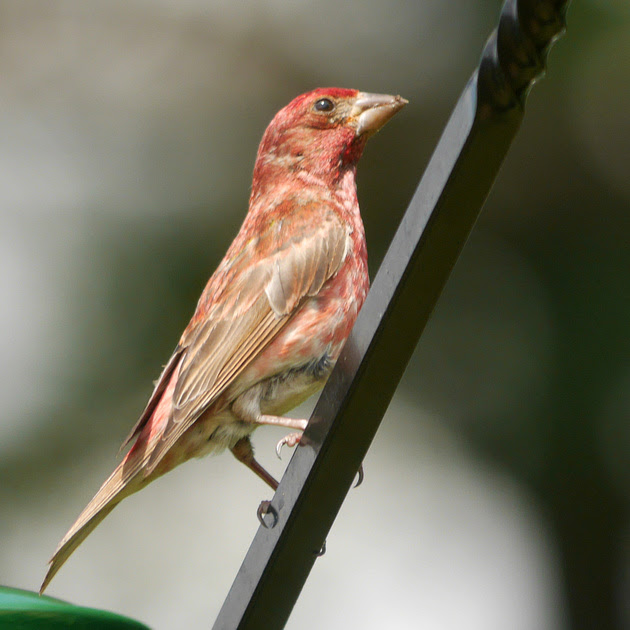 such purple, very finch, wow
Our friends Barbara and Jim drove us up, and as we do every year we stopped at Traveler Food and Books in Union CT (they seem to have no website, but here's a newspaper story about them). They have good food, a used bookstore in the basement, and they give away free books with every meal; highly recommended.

They also have bird feeders right outside their window, and the feeders are quite active. 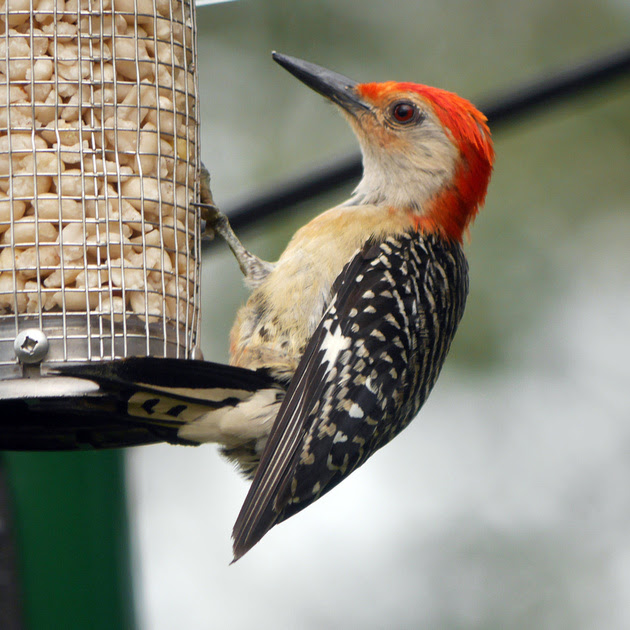 eating on the run
So we got in some bird-watching while we ate. (I don't seem to have ever blogged about the place before; how odd.) 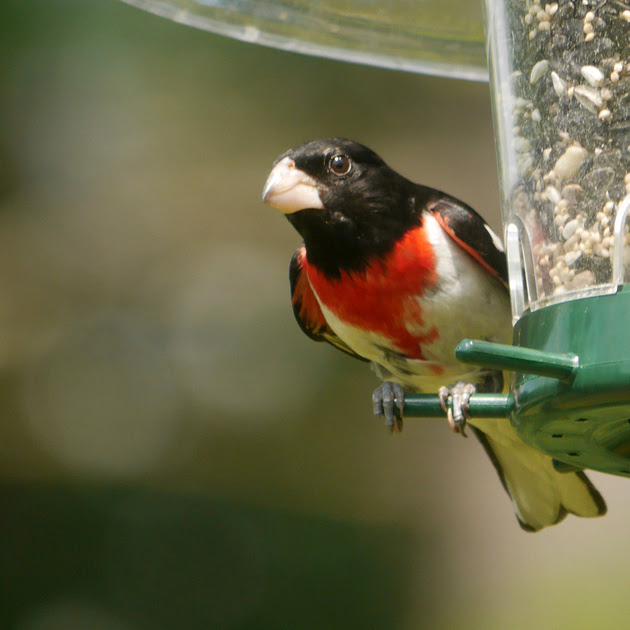 looking sharp
Even through the window, I got some pretty decent photos. The hummingbird feeder was used by four birds, which I think were a female with two fledglings, and a male. showing the kid the ropes
Telling a female from a juvenile is hard with Ruby-Throateds, but I saw one plain-throated bird bird show up with another on two occasions, and the second bird I think was different each time. 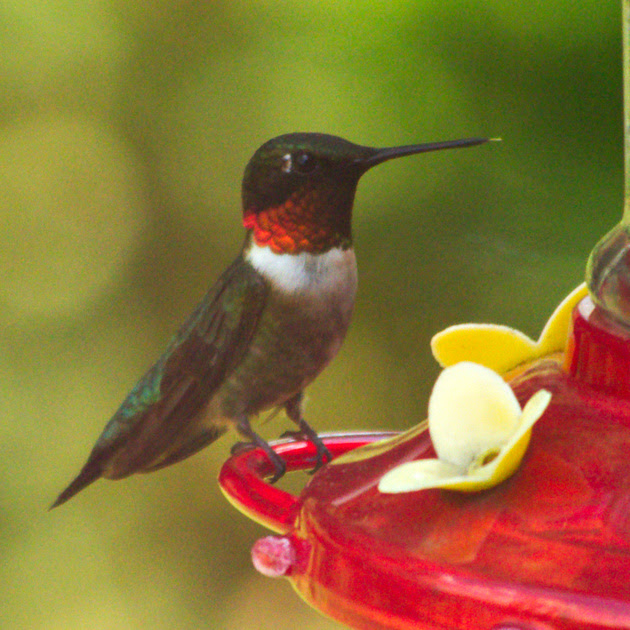 what the heck, one more hummingbird photo
And the male came from the opposite direction. Males have nothing to do with raising the young, anyway.

Readercon used to be in Burlington MA, and we'd go to Middlesex Fells on the first morning before the con began. This year, we went instead to the nearby Blue Hills Reservation. It seems very nice, but we got there a bit late in the morning, so the birding was slow. We did hear a bunch of singing Scarlet Tanagers, but nothing presented itself for a good photo. 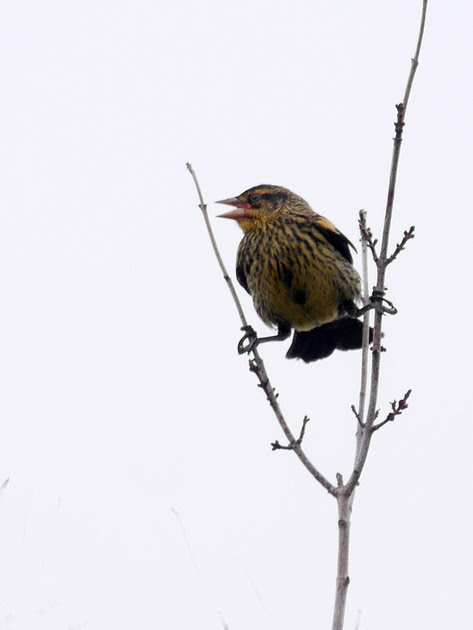 full bloom of youth
The hotel in Quincy was set on the top of a hill, and at the bottom was a nice pond. Ther were geese and ducks, of course, and a Green Heron hunted on the far side. Closer up, the Red-Winged Blackbirds were abundant, including the interesting bird above, one of a group of what appeared to all be young males. Note the epaulettes; I don't think I've seen them so yellow before. 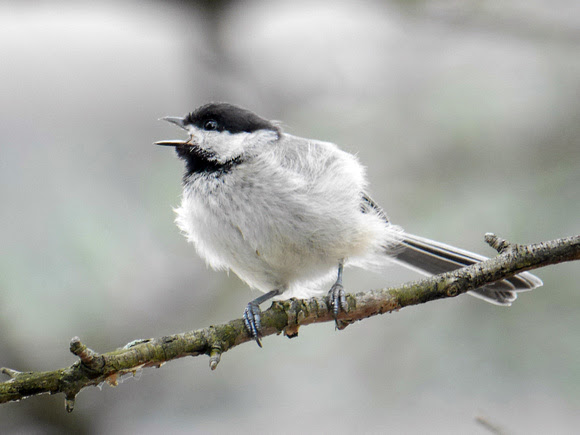 color photo, black-and-white scene
Also there were chickadees chasing each other around in low trees. This fellow had a lot to say, both singing and scolding. 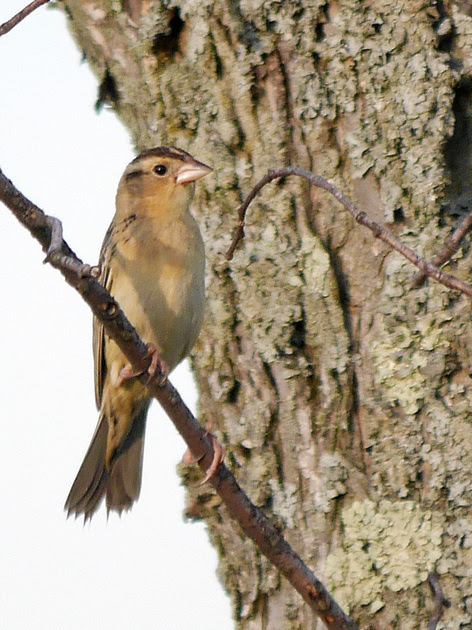 not a sparrow
I'm sorry my blogging has been so sparse lately; I'll try to do better. Summer birding has also been pretty sparse, though it's starting to pick up. While it was slow, we went on a couple of nice road trips.

The first was to a friend's summer place in Prattsville NY. We've been up there around the summer solstice the last couple of years, and it's always great.

As before, the highlight was all the nesting Bobolink in the fields at the nearby crossroads. Interestingly, thefemales were very active and I got some wonderful close-up views of them. I'm not sure what was different from previous years--perhaps they got an earlier start with their nesting, since some of them were clearly carrying food. 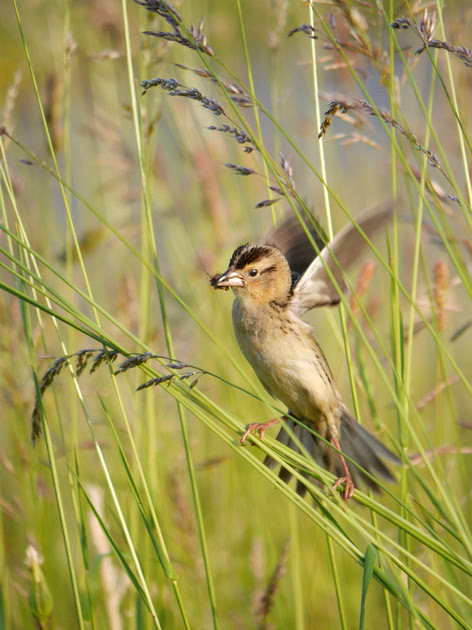 "bug in beak went my love flying..."
I had never seen female Bobolinks so close before, only perching up briefly on power lines. In fact, I spent a lot of time trying to figure out what these odd largish sparrows were, until one of the males popped up nearby giving the same contact call as the "sparrows". 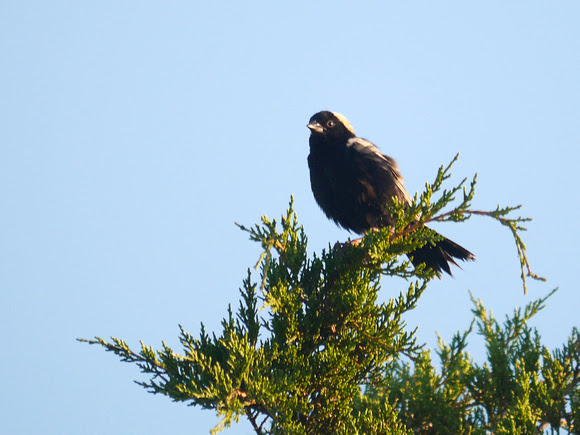 3-2-1 contact!
On the farm itself, most of the usual nesters were around--Prairie Warbler, Common Yellowthroat, Indigo Bunting, Song Sparrow, Chipping Sparrow--plus one I'd never had there before, a very loud Ovenbird in a stand of trees. The were mostly prety cagey this year, though, and I didn't get a lot of good photos.

One Common Yellowthroat did come out for a visit, bathing freqently in water pooled on the plastic cover of a sandbox in the yard. 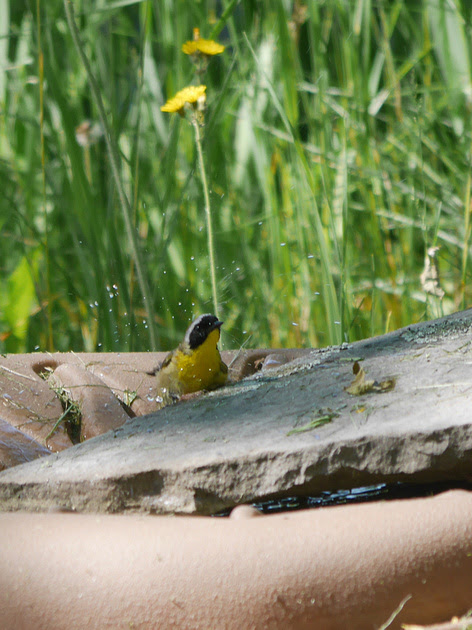 making a splash
Also, a gorgeous male Ruby-Throated Hummingbird enjoyed a feeder right off the porch. I spent a couple of hours photographing him as he visited every nine minutes like clockwork. Somehow, I was never able to get a sharp photo with the right angle of light to really show off his throat. I'm pretty happy with this snap, though--oh, those feet.