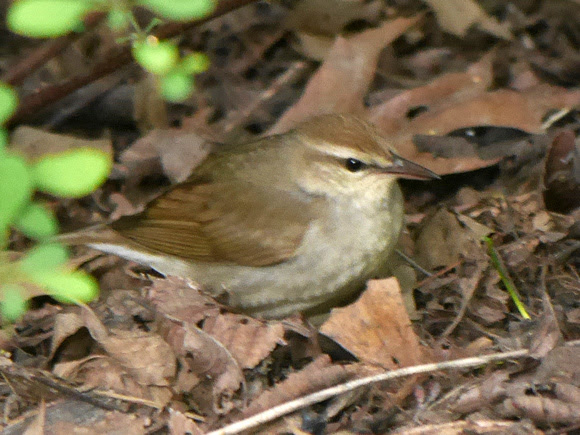 Thursday morning, I checked Twitter while finishing breakfast. What? Don't look at me like that. It's Spring Migration, and some people are out birding at six in the morning. And some of them will let the world know what they're seeing.

This morning, Alice Deutsch was one of them: "#birdcp swainsons warbler imagine mosaic". It was 7:22 AM.

Well, that was interesting. Swainson's Warbler? Do they even come this far north?

"confirming and it's singing"

I tossed the cereal bowl in the sink, grabbed my bag, and headed for the door. Outside, I did something I've never done before: hailed a taxi to take me to a bird sighting. God, I love New York. "72nd and Central Park West", I told the driver. The Imagine mosaic is there, at Strawberry Fields. I resisted the urge to add, "and step on it!"

Traffic was maddening, but I was on the scene by ten to eight. There were twenty or so birders on the park drive, staring into the low bushes separating the road from the pedestrian path. Some were lying on the ground for a better view. (The New York Post story about the bird has a nice photo of the scene.) I got down with them. The bird was singing in the bush--a ringing, jazzy little phrase of six or seven notes, reminiscent of a Fox Sparrow's song. After a few minutes, I saw something walking around down there (Swainson's are walkers), and that got me on the bird.

Over the next forty minuets or so, the bird moved around quite a bit, all under the bushes, all in an area of perhaps 15 feet long by 5 feet wide. The growing crowd followed him around. Every few minutes he sang. He came out into a relatively clear area once or twice, and then there was a flurry of clicking from the bird paparazzi. Eventually, I headed off to work--I wasn't even late. Much. 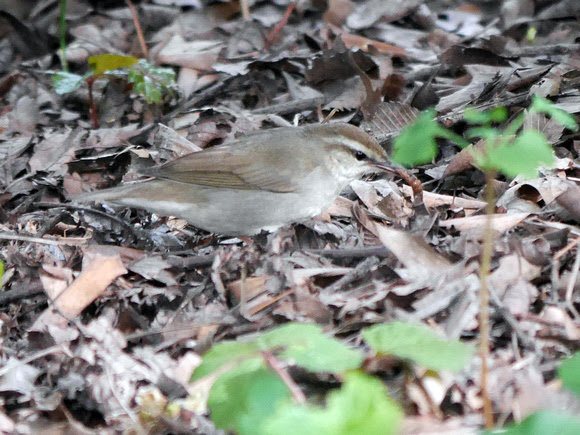 I kept seeing online report about the bird all day. he just stayed in the same little area. It is estimated that over two hundred people saw him, all in all.

Why all the fuss? Well, it's like this: Swainson's Warbler doesn't really belong this far north,and isn't very common even in its normal range. They breed in the southeast, mostly no further north than South Carolina, except for a population that breeds in the Appalachians as far north as West Virginia. We get one in this part of the country only when it overshoots by a considerable distance during its northern migration, which happens...rarely. Deb Allen did some research and apparently this is the first sighting in Central Park since May of 2000, and the fifth since 1973. I saw some posts that implied that people were getting into fights while jockeying for position. I am sorry to have to remind you all, there are rules. You are required to maintain an icy civility until your seconds make the arrangements. Brawling in the street is simply infra dig. Tsk.

Anyway, if you're in New York and didn't see the bird, it might still be there Friday. It was still around in the late afternoon, and the weather overnight might not be conducive to it flying...wherever it's going next. What do migratory overshoots do, anyway? Do they figure out they're too far north and go back? Do they wander around until it's time to migrate south again? Anyone know?
Posted by ed g. at 1:02 AM No comments:

Return of the Timberdoodles, and other stories 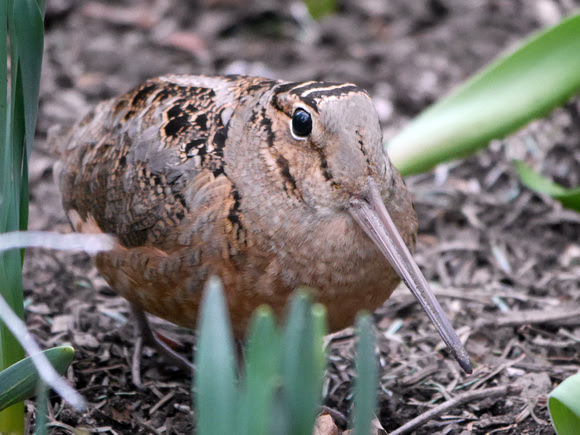 So I've been letting the blog slide lately. Most of that was life getting in the way. Anyway, migrants are starting to come in, and before they become a flood, I'm going to try to catch up with tales of the late winter and early spring. 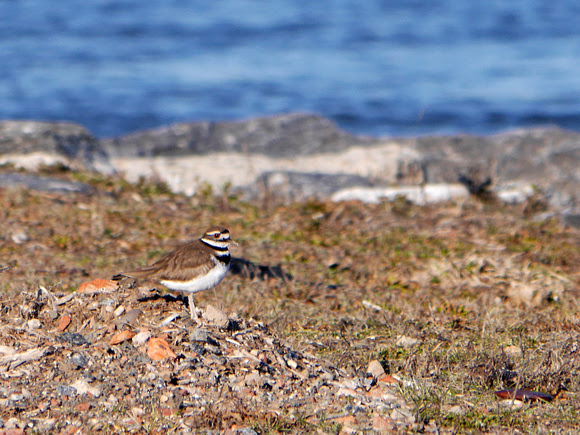 Late winter is the doldrums--not that much of birdiness in late February and March. In December and January, you have vagrants and too-late migrants showing up and often settling in around feeders or other winter food sources. But the late winter is kind of static--just waiting for the early migrants to show up.

The Killdeer above I found on the northeast shore of Randalls Island at the end of February. It seems to be teh first one seen in New York county this year, and a nice-looking bird. Last year, a pair tried to nest inthe wetlands area on Randall's Island. I wonder if this is one of them. 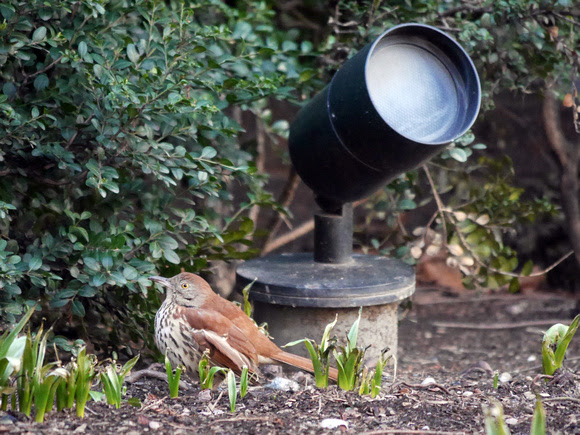 In a post late last year, I talked about the birds at the plaza of the old International Paper building in midtown. Some of them--two Thrashers, a towhee, a Swamp Sparrow--were still there in mid-January, and at least one was still there in early March.

The thing with unusual overwintering birds is that they tend to stay around whatever food sources they can find until the weather starts warming up around the beginning of March. Then they start moving around, maybe trying to figure out where the heck they're supposed to go in the spring. So if a vagrant or overwintering bird disappears in January or early February, that's a bad sign. For example, the Yellow-Bellied Sapsucker I saw a lot in the Midtown East area in December and January, I last saw around January 18, so it probably died. But birds that make it to the end of February and then disappear, may well be OK. Anyway, I was glad to see that this Thrasher made it. So by now you're probably wondering why this post is called "return of the Timberdoodles". Well, I'll tell you. Timberdoodles are American Woodcock, a football shaped bird with eyes set well back on its head and more nicknames than you can shake a stick at. Timberdoodle, bogsucker, Night Partridge, Labrador twister, hokumpoke, mudsnipe. They come north very early--late January through March--and have an awful time navigating through cities because they don't see very well straight ahead of themselves. As a result, they often get stuck in small urban parks, so it wasn't a shock when two of them showed up in Bryant Park at the same time.

I'm glad I saw these two there, because I didn't see any in Central Park this winter. Woodcocks like places with a lot of underbrush to hide in, and last year, for example, I saw a dozen of so in the Ramble over the course of the late winter and spring. This winter, the Central Park Conservancy in its wisdom decided to clear out almost all the brush and low shrubs in the Ramble, so no good habitat for the Timberdoodles. Because life wasn't tough enough for them on migration already.

The Conservancy's no-brush idea also means it's probably going to be a rotten spring to see migrants in the Ramble. You heard it here first. 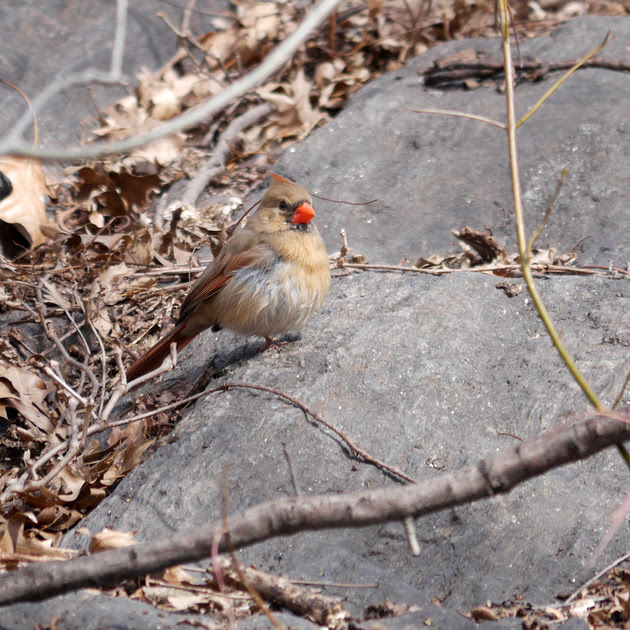 Among the full-time residents, the Cardinals started singing in mid-January, and are still going strong. One interesting thing is that there have been several sightings of leucistic males singing, like the one above. (Leucism is a genetic condition of partial loss of feather pigment; in cardinals it makes a normally bright red male loot a lot like the mostly gray-brown female.) It's startling to see what at first appears to be a female Cardinal start belting out a song.