The Pink-Footed Goose is a cold-weather bird. They breed in Greenland and Iceland, and they winter in northern Europe and Britain. The field guides say that it's an extremely rare vagrant in North America (for example the online Audubon guide: "Strays that have gone the wrong direction have been found in North America only a couple of times, in eastern Canada"), but since about 2011 they've been increasingly common, and there are several in the New York City area at the moment.

One of them is in Van Cortlandt Park in the Bronx, and I went to see it on Friday. 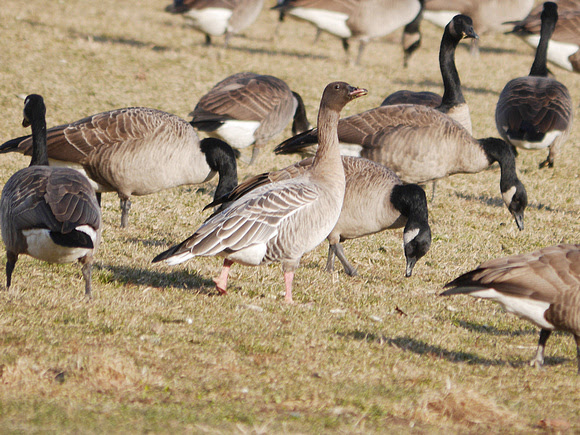 Pink-Footed Goose for Christmas!
I may have mentioned this before, but as a rule, if you're looking for a reported rare bird, look for the birders before you look for the bird. When I got to Van Cortlandt Park--a straight shot up the to the end of the #1 IRT subway line--I spotted people with scopes on the Parade Ground, scanning a huge flock of Canada Geese. This saved me from having to circle the flock myself--there had been warnings online about how shy and nervous this goose flock was. You don't want to be the bozo who flushes the rare birds.

Anyway, the scope owners turned out to be NY birding luminaries Gail Benson and Tom Burke, and they kindly gave me looks through their scopes at the Pink-Footed Goose and also a young Snow Goose in the flock.

I moved on to nearby Van Cortlandt Lake, where there was said to be a Cackling Goose and a Northern Pintail duck. 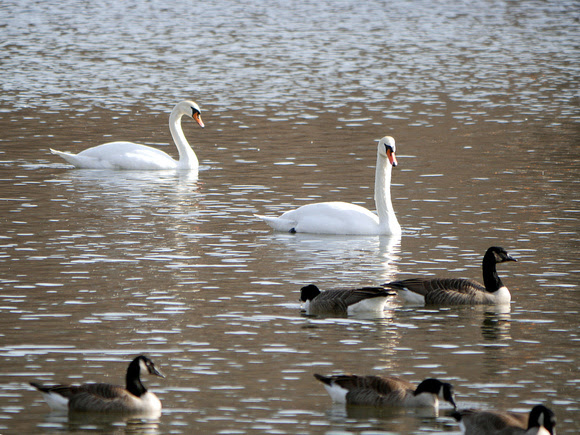 Swans always lend a touch of elegance
Most of the Lake was frozen over, so there were a lot of waterfowl crowded into a small area of open water at the south end. A pair of Mute Swans brightened up the scene, and a phlegmatic Great Blue Heron perched on a branch over the water only a few feet from the path along the west shore. Imperturbable
The birds on the open water included lot of Canada Geese and Mallards, several Shovelers, one American Black Duck, one Pied-Billed Grebe, and a few Ruddy Ducks. Ruddy Duck stretching out
Eventually I found the Northern Pintail, a drake. From a distance he was quite handsome, but when I saw him close up he was a bit scruffy. Well, it's winter. 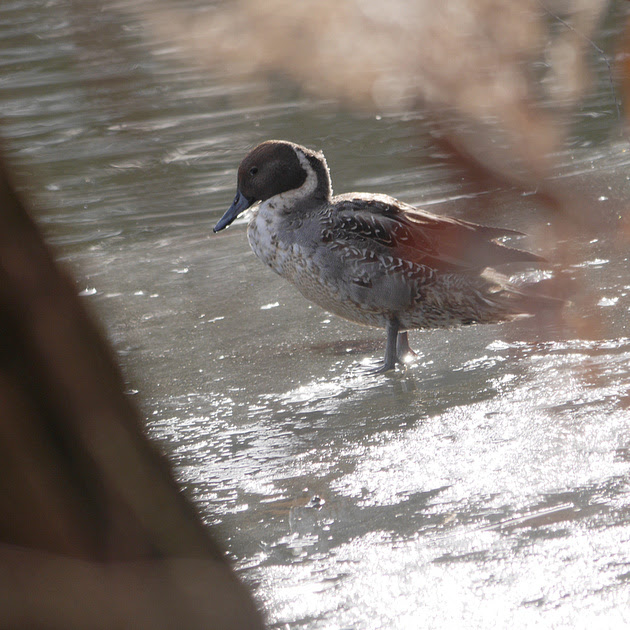 contemplative Pintail
The Cackling Goose never appeared--at least I saw no notably small Canada-type geese--and I eventually headed back to the Parade Ground to see if perhaps I might get a closer look at the Pink-Footed Goose.

There were at least a thousand geese on the Parade Ground when I arrived but almost immediately half of them were put to flight by a single large dog some schmuck decided to let run through Dogs are not allowed on the Parade Ground, by the way, and there are prominent signs to that effect. However, many dog owners consider themselves to be special beings not subject to rules. I will admit it was somehow inspiring to watch fine hundred geese rise up in a body, circle, and fly off. Goooooooooal!
A single crow stayed behind around the.southernmost soccer nets. There remained a large body of geese at the extreme north end of the field. These geese proved to be not shy or nervous at all. As I approached, I watched two kids passing a soccer ball back and forth going south along the east edge of the flock without disturbing the birds at all. Then an oblivious young man talking on a cell phone walked right through the middle of the flock; the birds near him walked out of his way, but they didn't even honk at him. 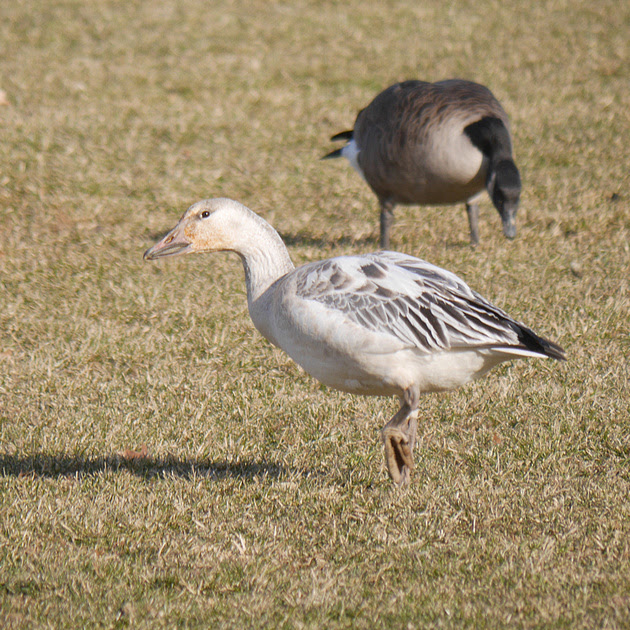 There's no gooses like Snow Gooses
I spotted the Snow Goose first, near the edge of the flock at the north end. I walked around to the west side, staying only about ten yards away; the birds didn't pay any attention at all to me. Finally I saw the brown head of the Pink-Footed Goose, also very close by, and I was able to get some nice photos of the rarity. 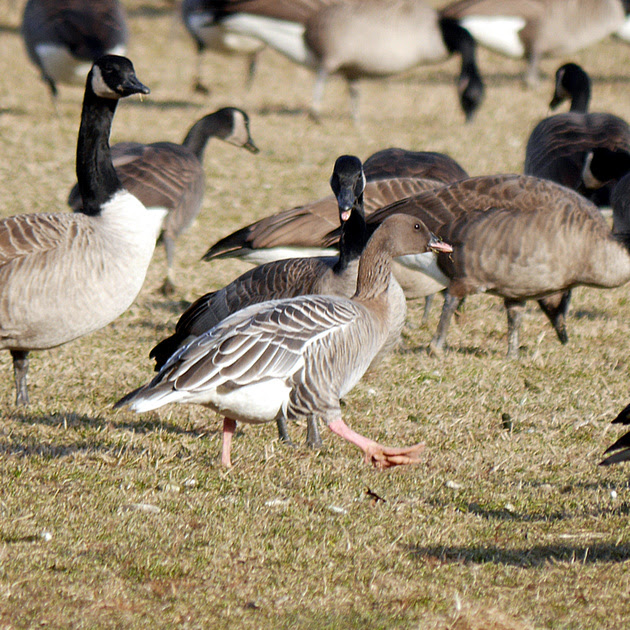 Very cooperative
And so I got my Christmas goose. The Pink-Footed Goose was a life bird for me, my 280th species. Happy holidays to you all!
Posted by ed g. at 10:15 PM No comments: