Rock rock, Rockaway Beach
Just before New Year's, I went out to Fort Tilden in the Rockaways. I'd never been there before; there are some seabirds that are fairly easy to find there in the winter that I'd never gone looking for.

It's not too bad a trip--took the 5 to Flatbush Avenue and the Q35 bus, very easy. (That's apparently also the way to get to Floyd Bennett Field, by the way.) Once I got there, I found that the maps I had didn't correspond to the territory, but eventually I found a path from the far end of a field next to a parking lot, which led right to the beach. 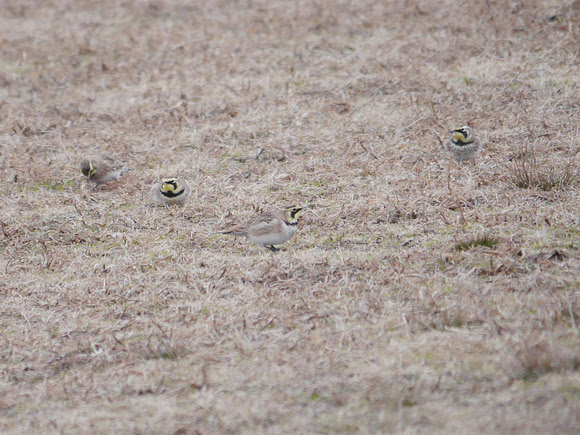 Horned Larks, working quietly
While traversing that field, I saw some Brant, and when I raised my binoculars to take a look at them, I realized there was a small flock of Horned Larks quietly foraging nearby. what a lark!
Very pretty birds, only somewhat wary. Really the best view of Horned Larks I've had, even though it was a gloomy day with poor light.

Arriving at the beach in an intermittent light rain, I quickly spotted a lot of Scoters. There was a flock of what I think were a mixture of Surf and Black Scoters a hundred fifty or so yards out--a bit beyond where the waves began to build, anyway--and a few White-Winged Scoters closer in (though not close enough for decent photos). A pair of what were clearly Black Scoters flew by, and a bit later several Gannets did the same, so I quickly had the two main species I had come for. not-so-Common Eider
Then I spotted a pair of dark ducks with rather elegant profiles, swimming inside the first breaking waves. These turned out to be Common Eiders, which I hadn't expected at all. (And another life bird!) Palling around
I think these are a male (in back) and a female, transitioning to breeding plumage. They stayed pretty close in, sometimes right at the end of the little jetties along the beach. 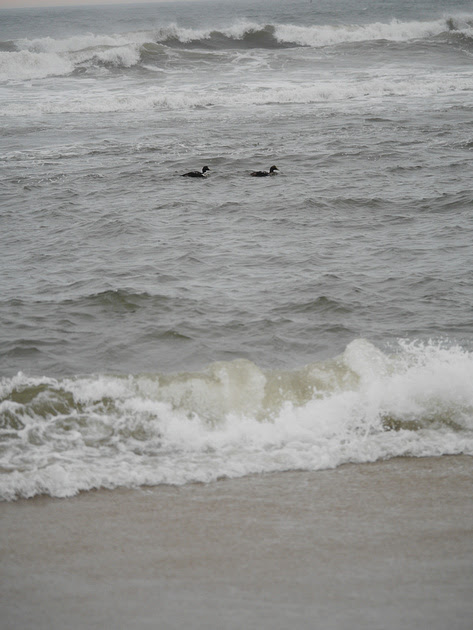 close to shore
The photo above gives you an idea how close in they were.

Another thing I didn't expect was a Peregrine Falcon, skimming low over the wet sand and putting up a group of gulls. I think it was hunting Sanderlings, of which there were plenty. 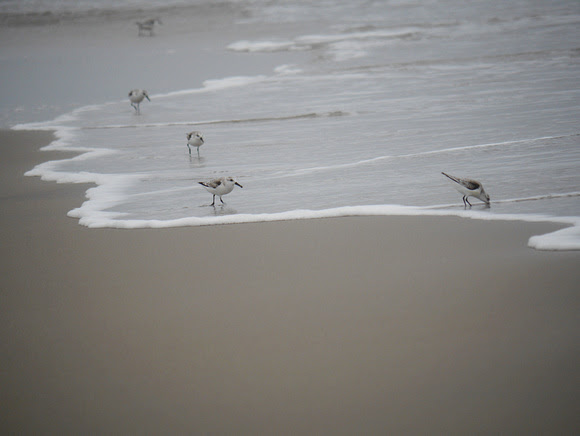 Sanderlings!!!
The Sanderlings moved along the beach in small groups, fine to about fifteen birds at a time, foraging for a while and then flying, always going west. 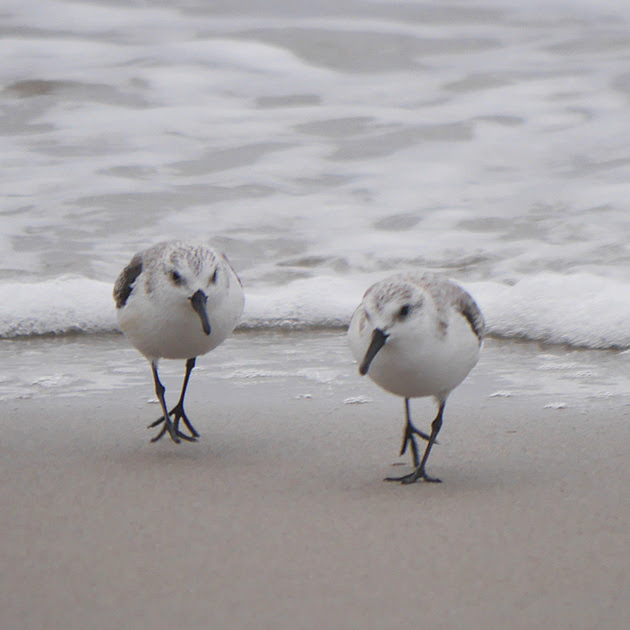 determined birds
I went east, toward Jacob Riis Park, as the storm broke up and the light broke through. The whole beach was empty, by the way, until I was nearly at Riis Park. A bit spooky, but peaceful. 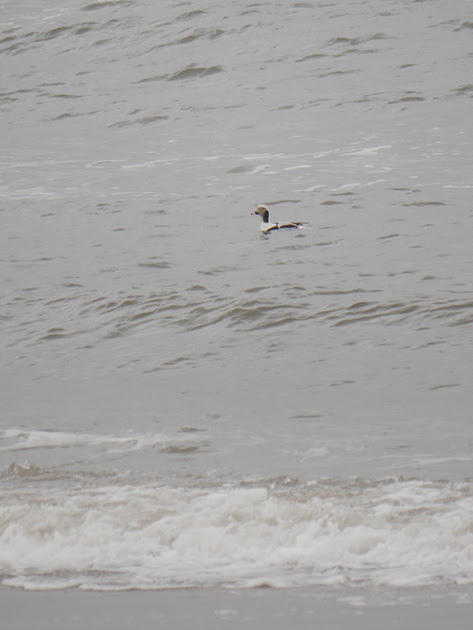 PC Duck
One Long-Tailed Duck flew in, just before I passed an older man and his granddaughters going the way I came. Farther along, a couple of fishermen were casting into the waves, while more gulls waited patiently for a meal to present itself. 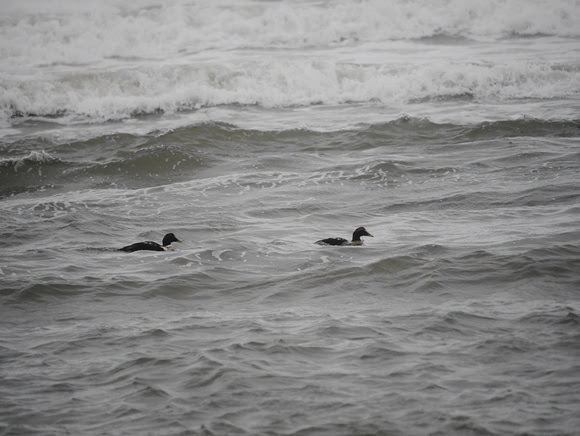 Seascape with Eiders
I'll finish up with one more photo of the Eiders in the surf. I highly recommend a visit if you don't mind the winter solitude.
Posted by ed g. at 9:55 PM No comments: 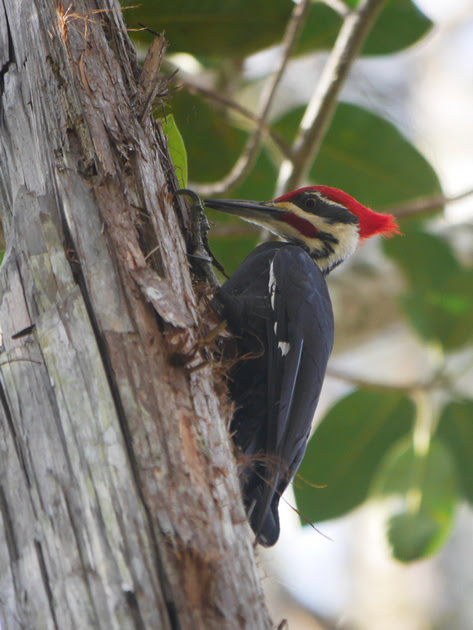 at last!
So went to Florida last weekend, visiting friends in Boynoton Beach and birding, birding, birding. One of the highlights was this handsome Pileated Woodpecker we saw at Loxahatchee NWR. This was a life bird for me, We spotted it by first hearing its slow and extremely authoritative banging on a tree in the Cypress Swamp section of the reserve (which is quite beautiful). I have been in likely Pileated habitat several times in the last few years, but never saw one. A real thrill!

I'll have more to say about the trip later, but for now--the Loxahatchee refuge, the last remaining bit of the northern Everglades, is under threat because the land is owned by the State of Florida, and the Governor would like to sell it to his big contributors in the sugar industry. You can find a list of action items about helping save the reserve at the Friends of Loxahatchee website.
Posted by ed g. at 4:22 PM No comments: The 117th Annual Central Park Christmas Bird Count went off on December 18th. I attached myself to the group doing the southeast park of the park. Led by Ranger Wu from the Parks Department and Lynn Herzog of the Linnean Society, we set off from 72nd Street near Bethesda Fountain, down the Mall to the Pond and the Hallett Nature Sanctuary, then up to the Zoo and vicinity before retiring to the Armory for soup and the collation of the counts of the various groups covering the park.

It was a foggy morning, but not too unpleasant, and fairly birdy. We had Juncos on the Mall, and both Sharp-Shinned and Cooper's Hawks. The Hallett Sanctuary was full of raccoons--no, I mean really full of raccoons, like a couple of dozen sleeping in the trees--but there were Ruby-Crowned Kinglets along the Pond shore, and then waterfowl.

Did I mention it was foggy? See the Great Blue Heron above for proof. Not great for photography, alas, unless you like this kind of low-contrast atmospheric portrait.

Anyway, probably the best bird was a Northern Pintail duck who'd been hanging around teh Pond for some weeks: 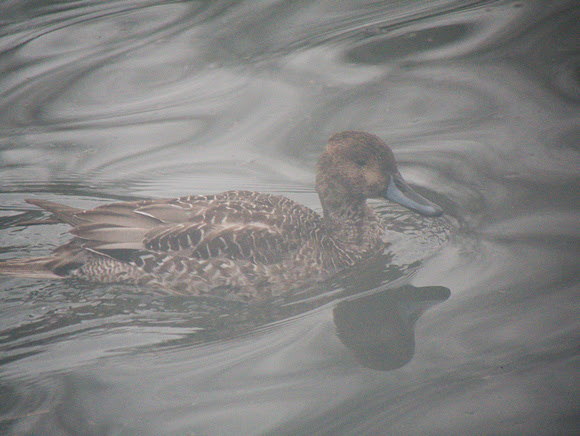 cryptic Pintail
and which we took for a female. Now, this duck looked pretty mcuh like that at least through Christmas, but on New Year's Eve, Elena and I went down to the Pond to see it again: 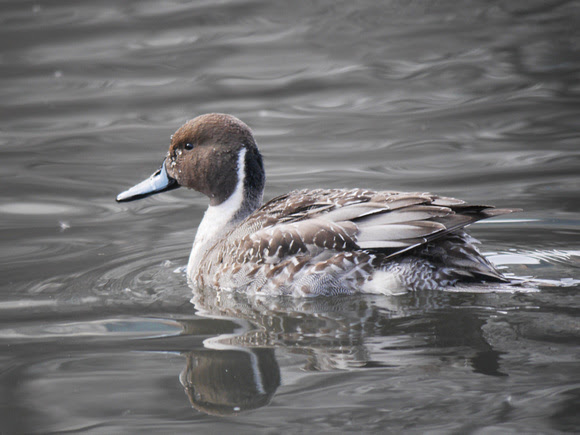 what a difference a week makes
That's quite a change! Our Pintail is revealed as a handsome young male.

There was also a drake Green-Winged Teal there...and both were still there the next day to help get my 2017 list off to a good start. 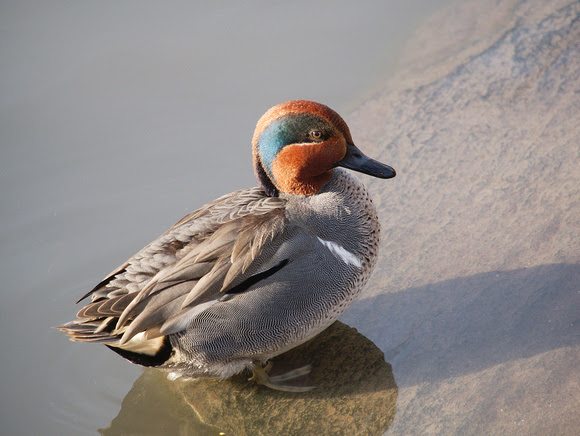 getting a taste of city life
Both these ducks have been thoroughly corrupted by city life, and were in the scrum begging for food from the people who feed ducks. It's a living. 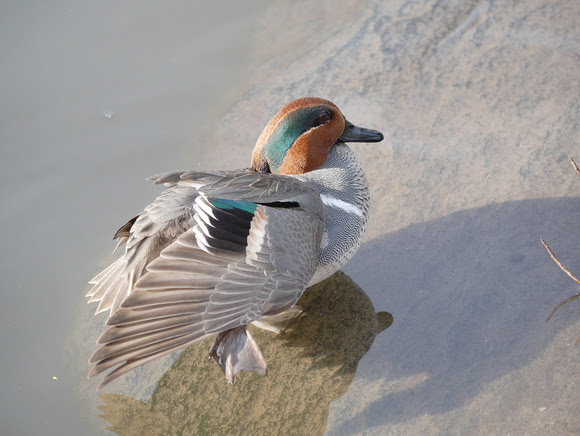