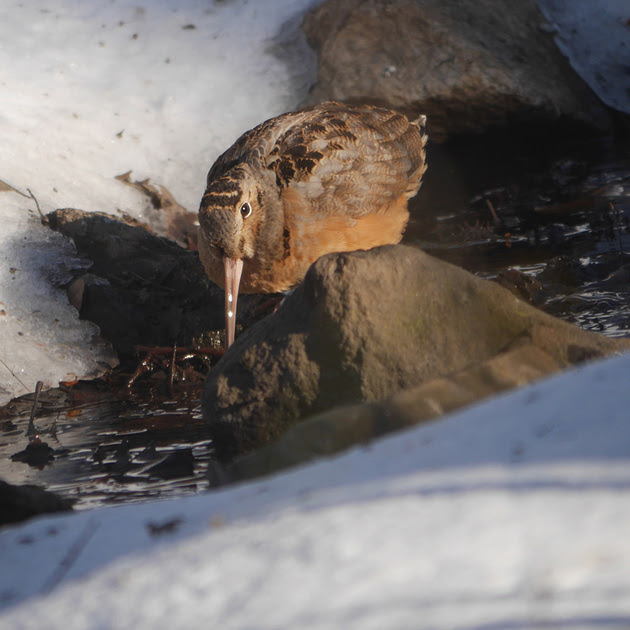 enjoying the stream in the morning light
The day after the big March storm, people noticed a huge fallout of American Woodcock (fondly called "Timberdoodles") in the city. (A "fallout" is when a lot of migrants descend on a place all of a sudden; usually because they;re forced by the weather.) The first #birdcp tweets came from the north end of Central Park, the Loch and Ravine area. Four woodcock...no, six woodcocks, um eight, no, make that twelve... Then the first report from the Ramble, two in the stream on the Point.

So I slogged into the Ramble on the way home from work. Didn't find the ones on the Point, but there were four down in the Oven in the fading light, and then two more in a stream between there and Azalea Pond. 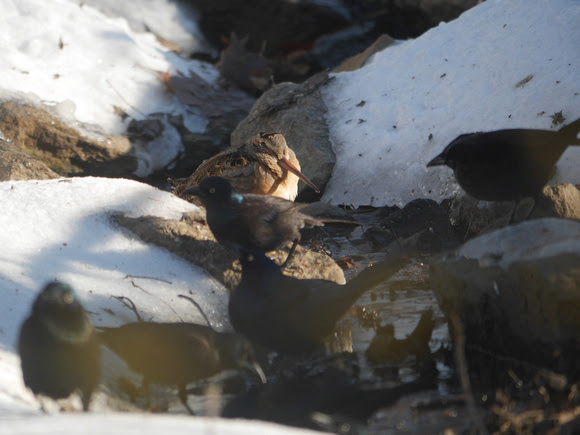 had to share the stream with bathing Grackles, though.  noisy neighbors!
I went back in the morning. Much better light, and even more Timberdoodles. Still two in that stream, and then: 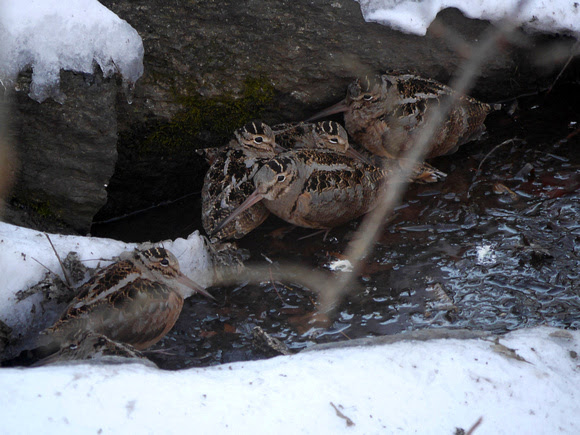 pile o' timberdoodles
A whole pile of them in the Oven. I counted and watched, and then this little scene played out:


So that was six in the Oven before I left for work. Meanwhile, Anders Peltomaa saw nine at the Triplets Bridge, and a Wilson's Snipe. And then the reports really got going. Tom Fiore estimated that there were at least a hundred Woodcock reported in Manhattan, and many more in Prospect Park in Brooklyn.

Some of these birds were in trouble. Woodcocks have a tendency to fly into building. This is a problem for many birds, but Timberdoodles especially because they don't see directly in front of them very well. Their eyes are way high and towards the back of their head, which is great for scanning for predators, but not so great for flying. According to a New York Times story, the Wild Bird Fund (local wildlife rehabilitators; great people, you should send them money) had 55 Woodcocks brought to them.

Others fared even worse. Woodcocks, as I said, have their eyes placed so they can scan for predators. They need this because they are slow and tasty, and even with the nearly 360-degree vision, they rely heavily on their excellent camouflage. When they're on a forest floor covered in leaves or pine needles, they pretty much disappear. But when thy're on snow, or the bare muddy banks of a stream...well, that's a problem. Birders watched Timerdoodles get snatched up by hawks all day long. Probably at least 50 in Central Park alone; I heard from one birder that he watched a single young Red-Tailed Hawk eat three in close succession. It was a raptor buffet. 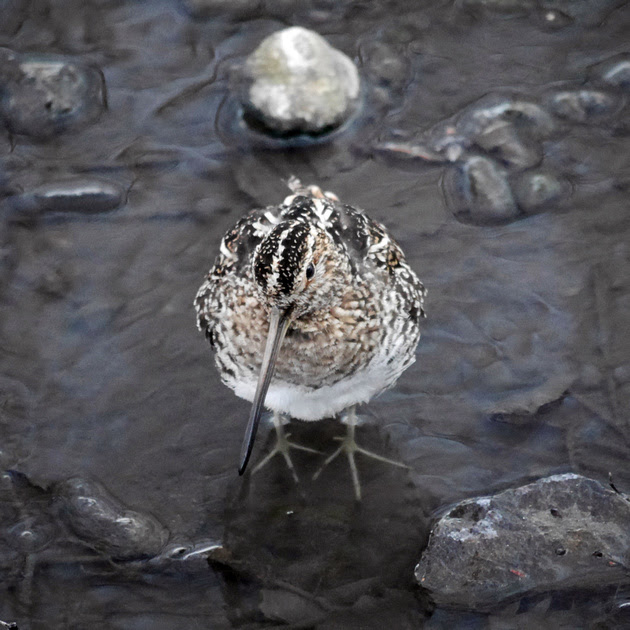 Wilson's Snipe!
So when I finally made it to Triplets Bridge, only three of the nine woodcock Anders had seen in the mrning were still there. But the Wilson's Snipe abided, foraging peacefully in the stream. 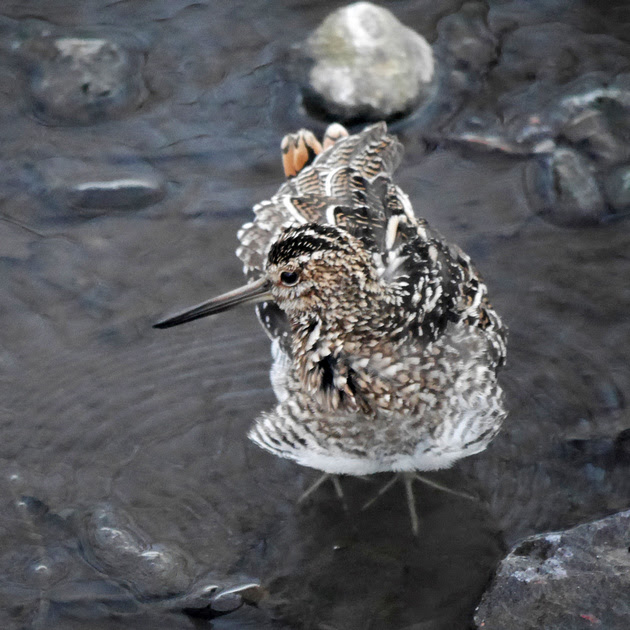 ruffled
At one point he ruffled himself up and preened a bit. I've never had such a good close view of a Snipe before. 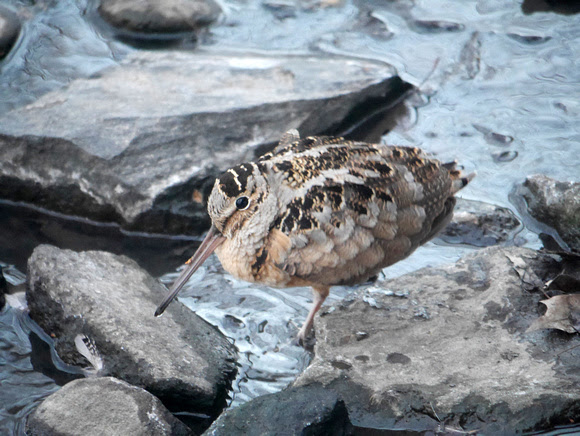 survivor
The remaining timberdoodles were ware buy still active. One came out and walked across the stream near the Snipe, giving me a chance to see both of these similar birds together. 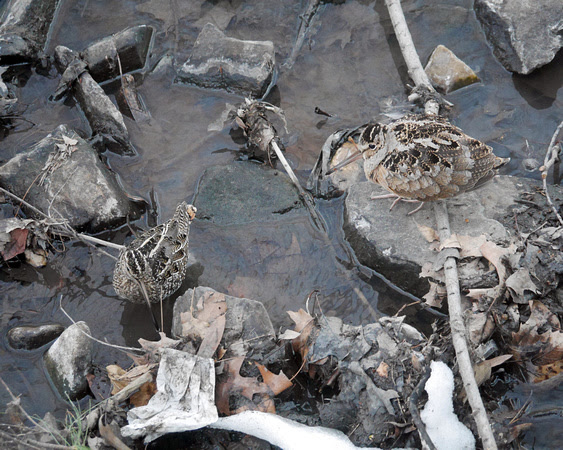 comparison
The Wilson's Snipe by itself gives the impression of being a largish bird. It is not. It was much smaller then the Woodcock, which is itself not huge, being rather smaller than a football. 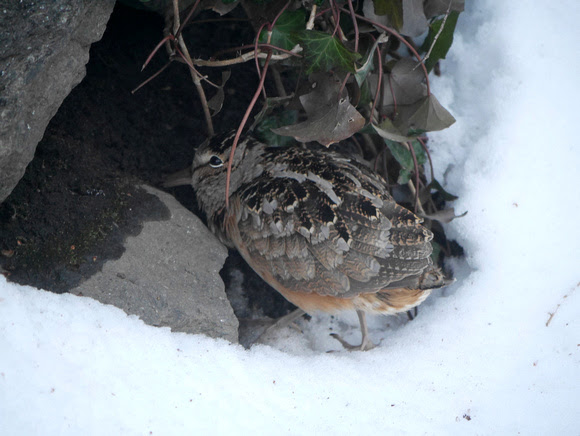 in the hollow
That woodcock eventually nestled itself in a hollow, where it foraged. 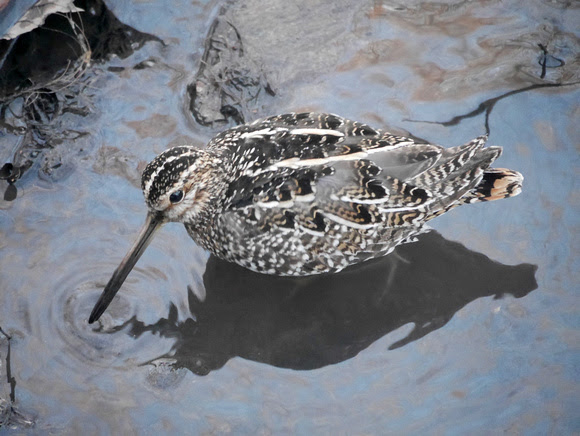 more Snipe
Many of the surviving Timberdoodles flew out that night, but some remained in diminishing numbers. I saw one as late as Sunday in the Ramble. They should be close to finishing up migration at this point, though I know that Gabriel Willow is leading a group to Floyd Bennett Field in Brooklyn on Saturday to see their spectacular mating flights.

Just because, here's some photos of the big white wading birds of Florida. 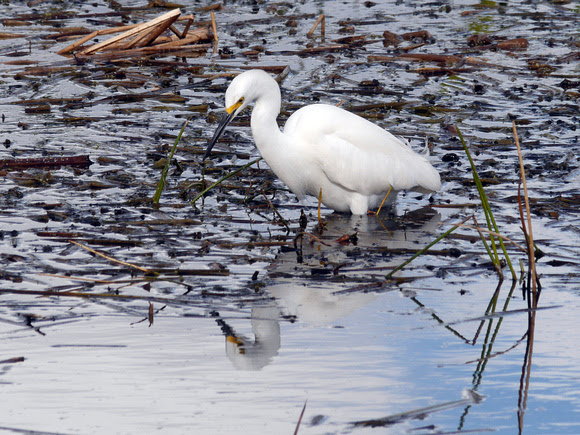 the more I look at this one, the more I like it (Snowy Egret, Green Cay)
Some of the birds at the wetlands parks are quiet used to people and go about their business within a few feet of the boardwalks. 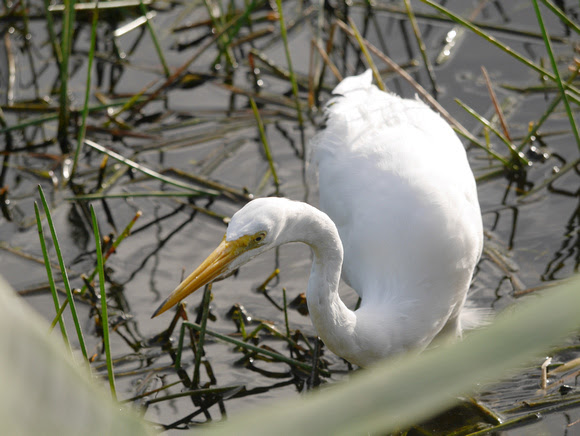 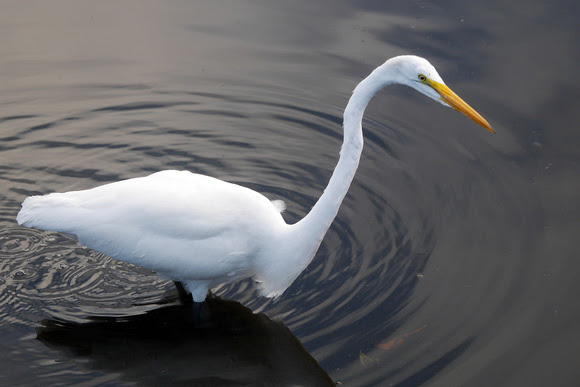 Great Egret hunting, Wakodahatchee Wetlands Park
Cattle Egrets were happy to get close as well. At Wkosahatchee, a bunch of them flew up onto the boardwalk railing only a few feet away from us. 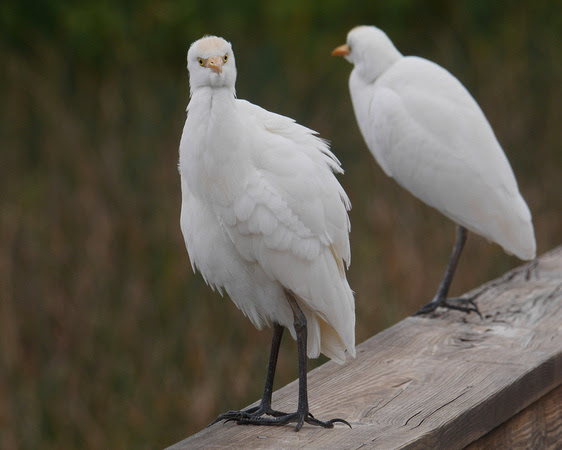 no, you back off 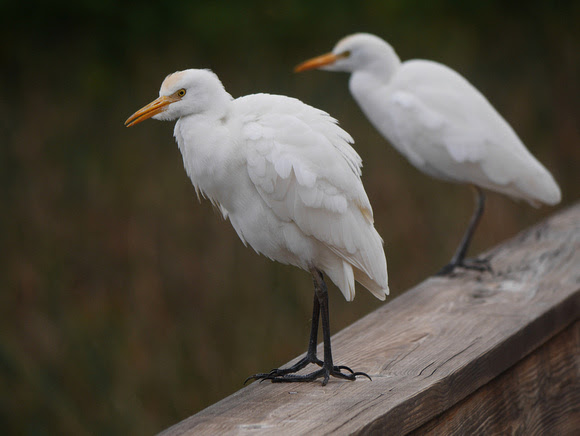 Let me tell you something, buddy... 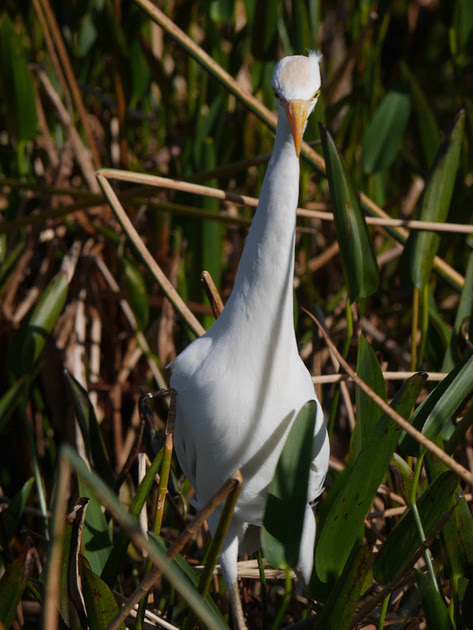 more 'tude
I looked at this next one a long time while photographing, and then again at the photo at home. It's a Cattle Egret, too, just in a slightly different state of plumage. 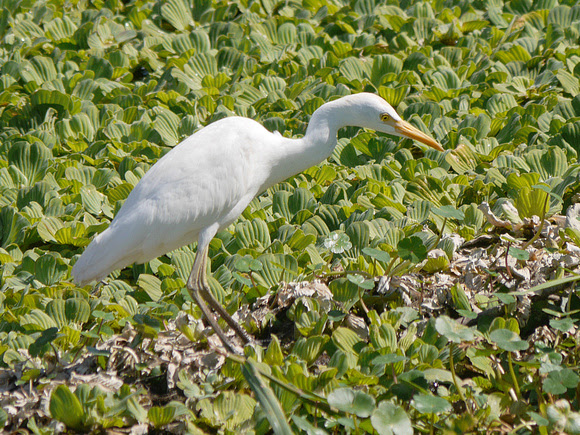 Here's an odd one out for the big white birds. This is a Little Blue Heron--they're white in their immature plumage: 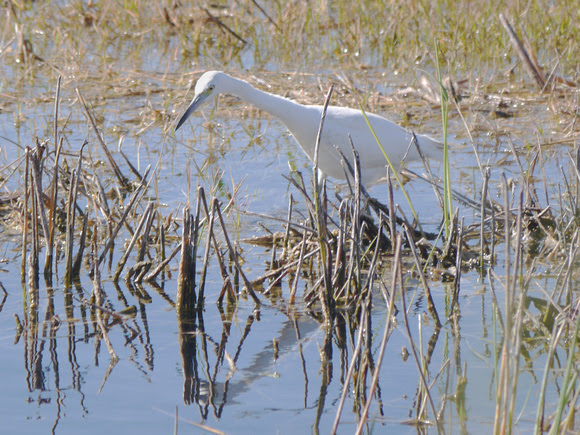 odd one out
I'll finish this up with a White Ibis in nice light: 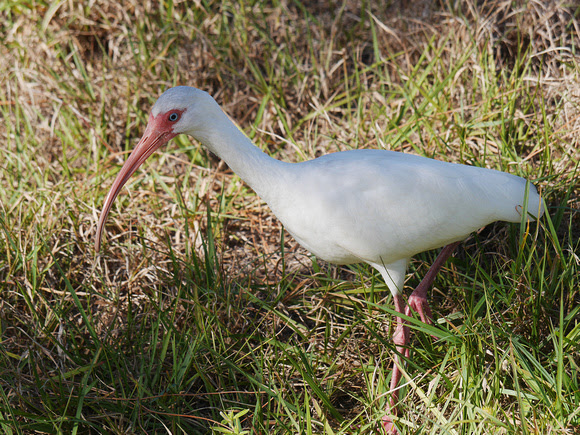 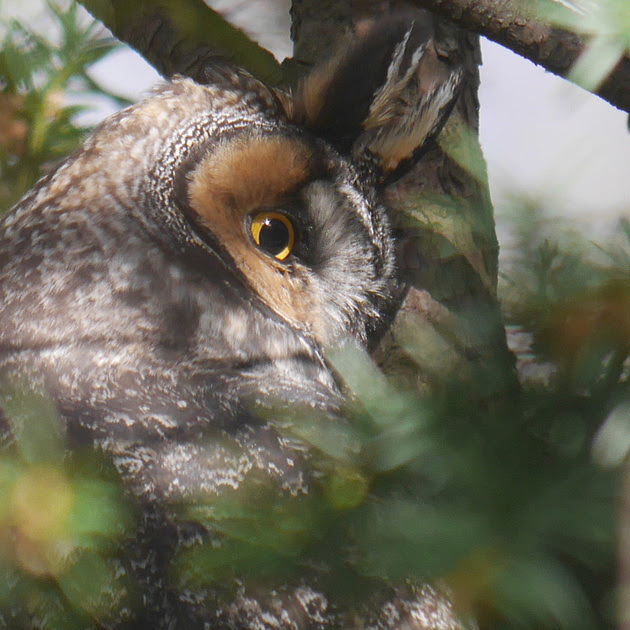 WHO DARES?
Birders have a complicated relationship with owls.

Owls are beautiful, and mysterious, and thrilling--the sight of a hunting owl skimming silently over a field is not something you will soon forget. So they are very desirable to see.

Owls are usually very hard to spot. They're mostly active at night, hunting in the dark. During the day, they sleep. They roost in trees, with foliage the denser the better. Other birds know owls are dangerous, so if they find one, they set up a racket to try to drive it off or at least disturb its rest. Their alarm calls attract more birds, who make more noise, which brings more birds--this is called "mobbing". For a birder, the best way to find an owl in the day is to listen for jays or crows mobbing it. In turn, jays and crows are smart and know that if a bunch of people are looking in a tree, there might be something interesting going on.

On the Manhattan Bird Alert twitter recently, someone reported where an owl roost had been five hours before, and holy cow! the screaming. The report had been on eBird.org already (I guess eBird reports don't count somehow?) and said that the bird had been flushed by Blue Jays and wasn't there anymore. Apparently, it is now unethical according to some people to suggest that a particular section of the park might be worth looking closely at. Also. it's terrible to lead people to birds instead of letting them find them themselves, according to some guy subscribed to a bird sighting alert. OK, then. 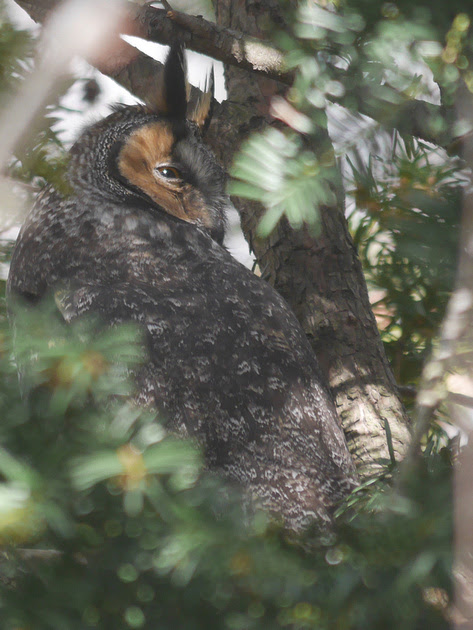 sleepy
On Saturday afternoon, I was birding in Central Park. I walked down Locust Grove pondering if going straight to the Ramble would be better than a diversion through the Shakespeare Garden. Two people passed me, parents of an avid young birder. Had I heard about the owl? they asked. They told me their son had just texted them about it. He was at Inwood Hill and had gotten a text about from someone who heard t from the guy who found the owl. (Anyone remember that ad, "if you tell two friends, they'll tell two friends, and so on, and so on..."?) Anyway, he said that there was a Long-Eared Owl "low in a tree in the Shakespeare Garden".

And so there was. It was quite low, about 12 feet up a Yew tree; about eye-level if you were standing on the path going up past the sundial (if you know the Shakespeare Garden, that will make sense...) where a photographer was already set up with one of those lenses that cost as much as a decent used car and weigh only a little more.

The bird was actually quite well-hidden from that vantage. I found my best views on a path farther away from the tree and a little below it on the other side. Within twenty minutes, there were around twenty people there, all standing at a fairly respectful distance. People filtered in and out; probably fifty or so came and went over the next couple of hours, the crowd size remaining pretty constant.

Birds filtered in and out as well. A few jays came around a couple of times and yelled at the owl for a few minutes; but they didn't hang around long, which was odd. Usually they keep yelling until there's a big crowd of birds around the roost.

A score or so of House Sparrows occupied a nearby tree for ten minutes or so making tsip alarm calls. Then they left. A single Titmouse visited every few minutes, scolding. All-in-all, it wasn't exactly peaceful, but it wasn't a full-scale mobbing. 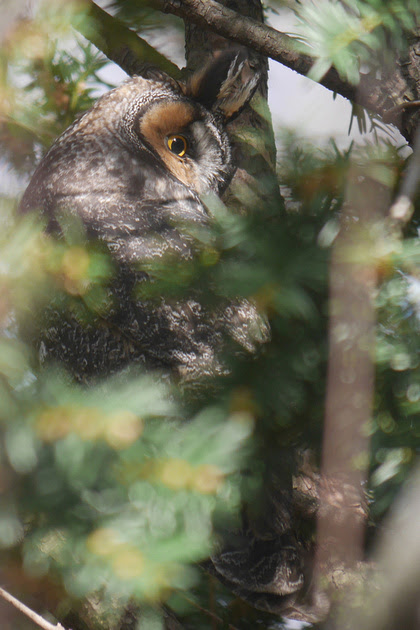 why not another owl photo? why not, indeed!
The owl was asleep some of the time, but woke frequently with the wild-eyed "who dares disturb me?" look that is typical of Long-Eared Owls. I'm not sure how much the people disturbed it, overall. The Shakespeare Garden is pretty well-trafficked on a nice weekend afternoon, and the path directly under the tree is normally popular. The birders were steering the crowds away from that path, and some Central Park Conservancy staff came along to watch and keep order.

Nobody tried to climb the tree. People have told me that that has happened in the Park sometimes. Also, nobody ever put the sighting on the twitter alert, which is pretty remarkable restraint. It's not clear to me whether that actually cut down on the crowd much. Most of the Park birders know each other, so the grapevine was pretty effective in getting the word out. Also, I think reports did start to show up on eBird while I was still in the Park.

I heard there was a pretty good crowd watching the owl fly out at dusk. It didn't return to the Shakespeare Garden on Sunday, or anywhere else in the Park that I heard.
Posted by ed g. at 4:28 PM No comments: