A sight for Sora eyes 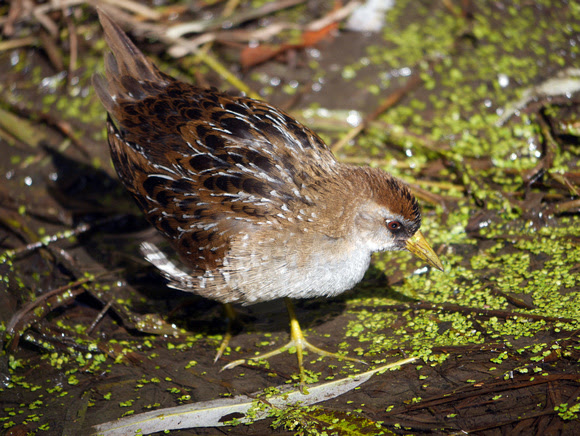 For almost two weeks, the most notable bird in Central Park has been this Sora who has been in the Loch in the northern part of the park. Soras are freshwater marsh birds, and don't normally stop in Manhattan even during migration. We get maybe one very couple of years--the last one was in Bryant Park in October of 2013.

Soras are also normally quite skulky, though you wouldn't know it from this one. Probably it has resigned itself to the lack of really dense cover in the Loch. The bird's left wing appears damaged--it drags the wingtip, though I'm not sure if there's actual structural damage or if the feathers are just mangled. 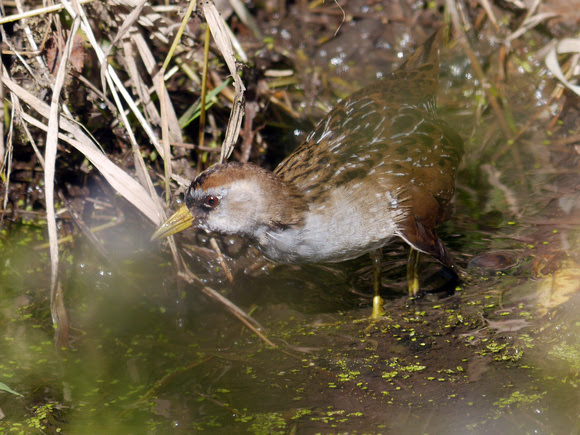 You can see the droppy left wing in this second photo. There's been some talk of trying to trap the Sora and get it to a wildlife rehabber; I know the park rangers tried at least once, unsuccessfully. The Wild Bird Fund people are worried that catching the bird might be more stressful than letting it try to heal on its own--it appears to be foraging well, and if the problem is just feather damage it might replace those feathers in time to get south on its own. Or, they can try to capture it later. No need to force a crisis early.

Meantime, it's been giving some excellent views. Unfortunately, I have heard that a photographer was chasing it around with a big flash a couple of days ago. I suspect I know who that was--not a malicious guy, but just clueless about how birds behave. Which is not a great excuse.

Anyway, I got this second photo from about 18 feet away--I stood behind some vegetation on the opposite bank of the stream (it's only two or three feet wide) and waited for it to emerge from a thicket. The top photo, taken slightly later, was even closer.

I moved down the stream ten feet or so in the direction the Sora was going, and waited. I was rather in the open, and I was worried that the bird would spot me and turn back, but I figured at least it wouldn't be really disturbed as long as I didn't approach it.

I think this is usually the right technique for a bird that forages on the ground--figure out where it's headed, get there first, be still and wait quietly. Just don't chase the bird around--you'll scare it, it will think you're a predator.

In the event, the Sora paid no attention to me and continued working downstream, walking right past me. I could have gotten a lower point of view, but I was in a bit awkward position, and I didn't want to move a lot once it came into sight. 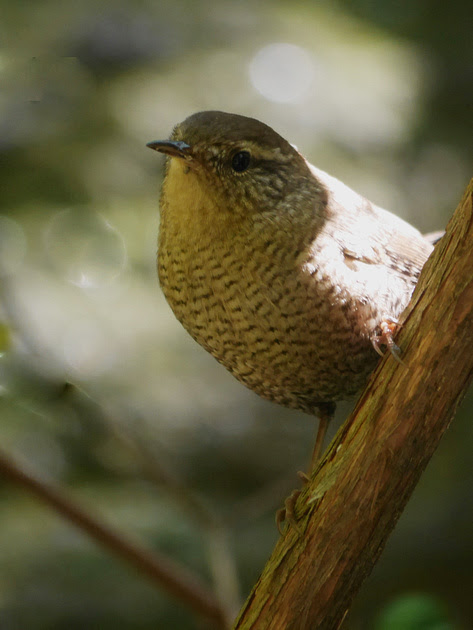 Winter Wren working it for the camera
The thing about Fall migration is that it lasts a long time. Spring migration is a few intense weeks in May, with a slow build up for maybe a month. before, and a rather abrupt ending. Fall migration starts around the end of July and continues in a fairly steady stream for about three months.

So the less common birds get spread out a bit. Sort of. 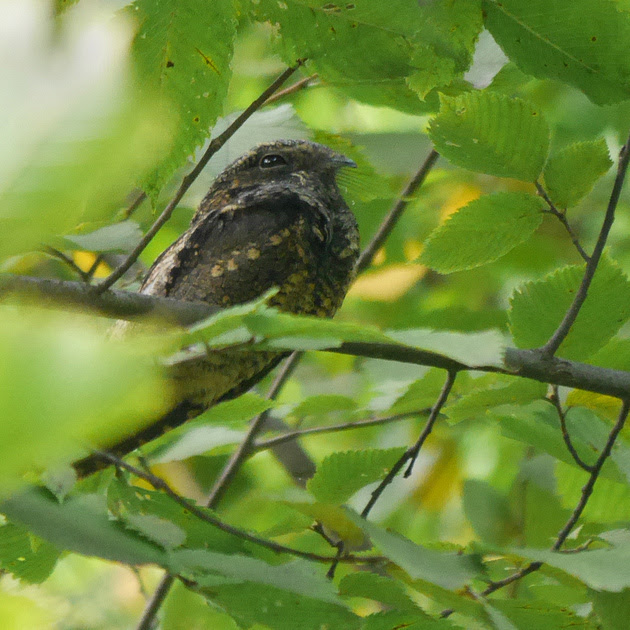 lazy afternoon
This Whipoorwill turned up in the Loch in northern Central Park in late September. That's a nice bird for Manhattan; we get maybe one a year--more frequent than then Chuck-Will's-Widow, less frequent than Common Nighthawk.

Whipoorwills sleep most of the day, like owls, and wake up around dusk to hunt insects. They're hard to spot, since they don't move around much during daylight, and they generally roost pretty high up. This one was in an unusually low perch, the the photographers had a great time with him.

That same day, a Grasshopper Sparrow was spotted on the Knoll, also in the northern part of the Park just a short walk from the Whipoorwill's roost. I didn't see that bird, though. Well, maybe I did: I saw a very streaky backed sparrow fly by me that the other birders said was the Grasshopper. They had had a good look at it before, but for me, that wasn't enough of a view to count. 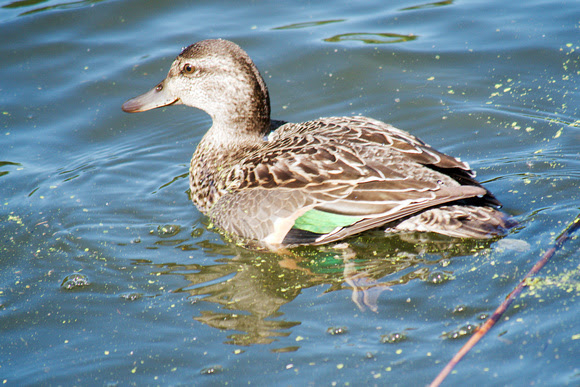 showing the flag
Then the next week, two fairly uncommon birds showed up at Harlem Meer. This female Green-Winged Teal spent a lot of time browsing a patch of duckweed in the southwest corner of the Meer near the little island.

The Green-Winged Teal is our smallest duck. Here's what that means: 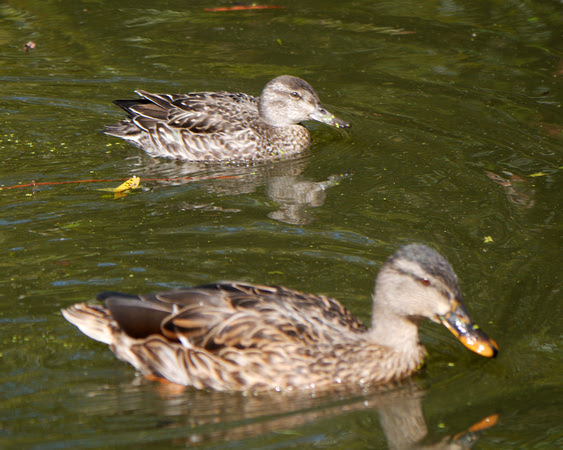 size comparison
You see it's about half the size of the Mallard. You can almost ID it just on size.

Also on the Meer at the same time was a female American Wigeon. I had a heck of a time picking it out of the crowd of Gadwalls, even though they were all just a few feet off shore. It blended in surprisingly well. semi-anonymous
The dark bill isn't all that striking when you're watching it swim around, and the coloring is a bit cryptic. Eventually I noticed that it was the only one never showing a white speculum, and then it became obvious. 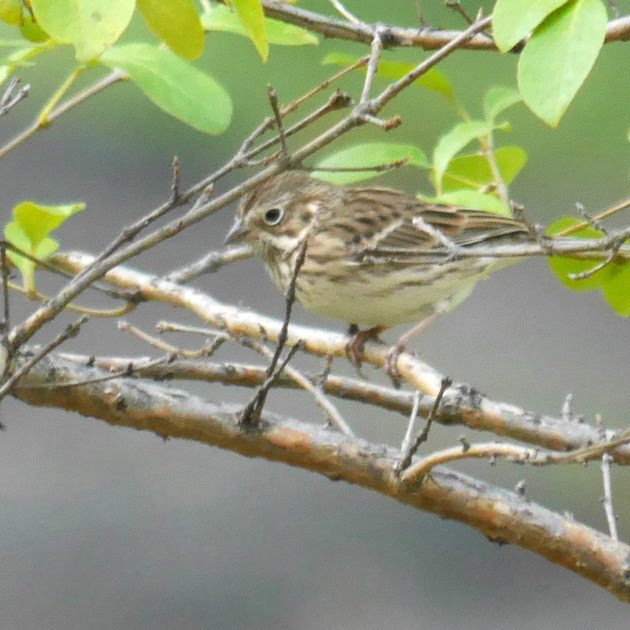 bird of the evening
Besides the Grasshopper sparrow, Central Park has hosted a couple of other uncommon sparrows. A Vesper Sparrow spent the better part of a week in the area called Locust Grove, along a woodchip path just west of the Great Lawn between the Delacorte Theater and the Pinetum. It only liked to come out when the light was dim.

Of course, a lot of non-rarities continue to move through, like the Winter Wren at the top of this post, and this very confiding Pine Warbler: 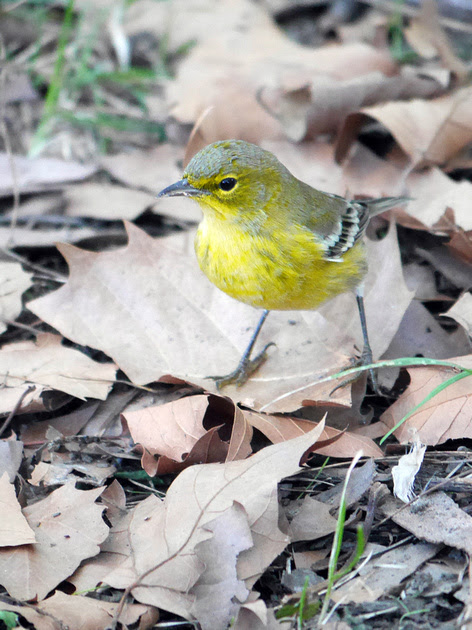 warbler at my feet
He hopped around within a few feet of me, too busy foraging to worry about some slow monkey.

But there are signs the migration is ending, like the arrival of Juncos. They usually come right at the end. 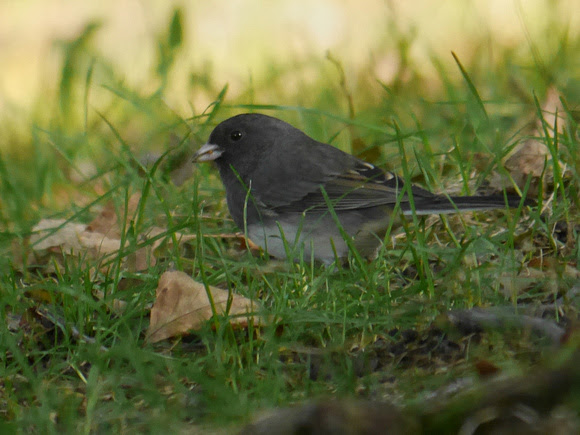