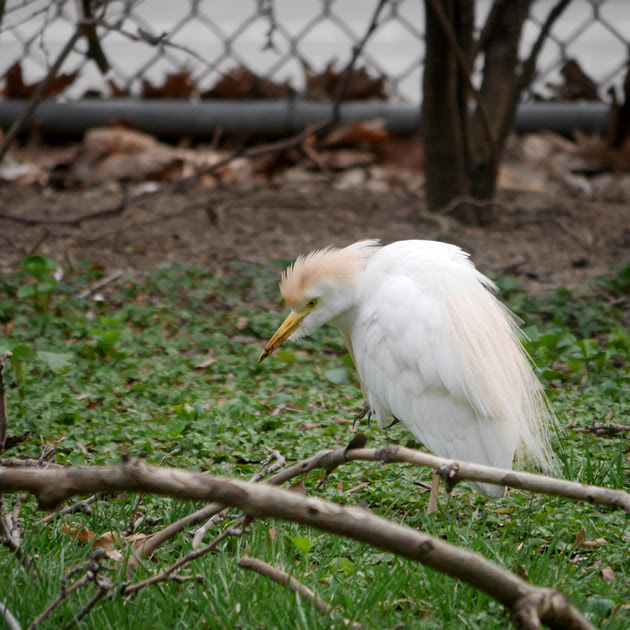 Cattle Egret on the prowl

It's migration season! And of course New York City is getting pretty much every type of warbler found in the northeast, just like every Spring. Enjoy them while you can!

But we're also seeing some very unusual visitors. At the top of this post, we have a Cattle Egret--I think the first every seen in Manhattan--who has been hanging around at the Penn South co-op, around 28th Street between 8th and 9th Avenue in Manhattan. 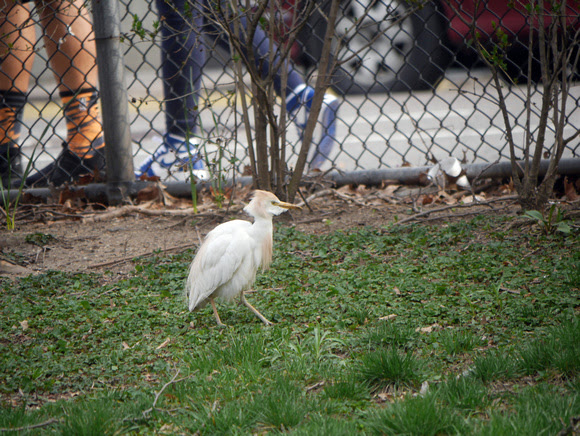 Cattle Egrets are originally an African bird, showed up in South America in the 1950s, and have been steadily extending their range over the last few decades. They're quite common now in the southern US--basically a roadside bird in Florida, for example. 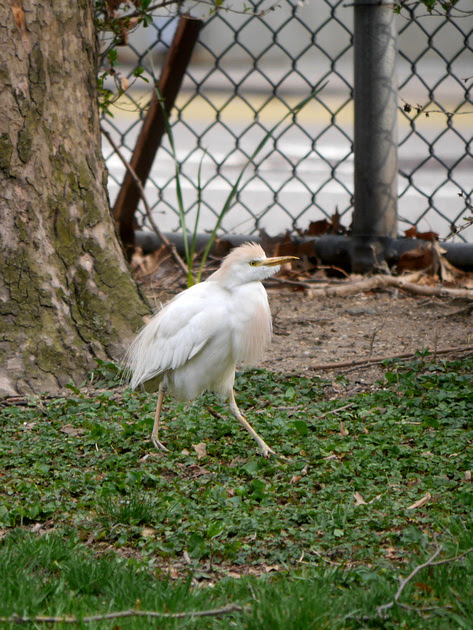 However, it's rare up north. I believe one shows up at Jamaica Bay or Jones Beach once in a while, but that's all. It's in good breeding plumage--the off-white crown and back feathers--but I don't think it's going to find a mate up here. Not much of an environment--but enough

The area you see the Cattle Egret in here is (so I understand) having some construction work done on it, but the bird is still around a little farther south, still on the grounds of Penn South. Worth a visit if you're in Manhattan. Keep an eye out for other birds when you're there--there were some warblers about when I visited. 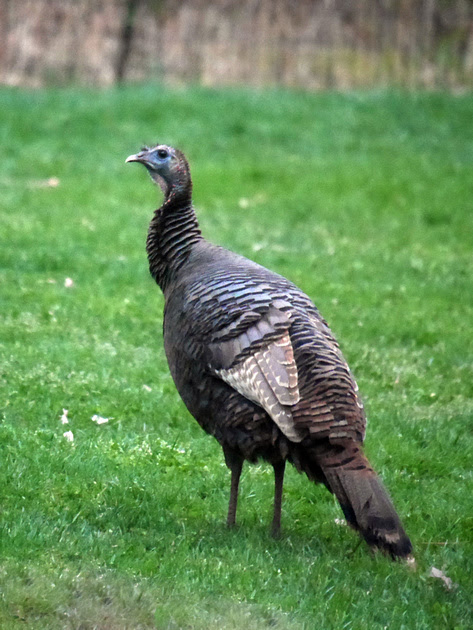 A Wild Turkey showed up in the North Woods of Central Park a couple of weeks ago. Turkeys are not unknown in the City. I'm told there are some in Pelham Bay Park in the Bronx, and even in Manhattan there are reports occasionally from Inwood Hill. And of course there was Zelda the Battery Park turkey, killed by a car a couple of years back after a long life there. Still, they're pretty rare here. 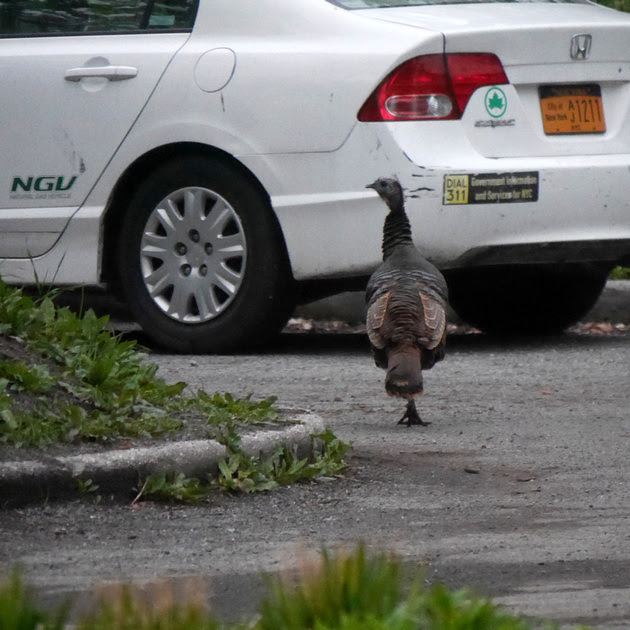 I was emerging from the Ramble after an afternoon's birding, and I saw David Barrett looking at something at the edge of the Ramble Maintenance parking area. Surprise! The North Woods turkey had been one the move. We watched the bird scratching through leaves and pecking at the grass for a while, until some idiot chased it across the lawn and it flew up a tree. I think I'll just stay up here. To heck with you people.

The turkey continued moving south through the park the next day, and wound up at the lawns around Seventh Avenue and 59th Street. I think it's still there--it seems to be smart enough to avoid traffic and dogs. 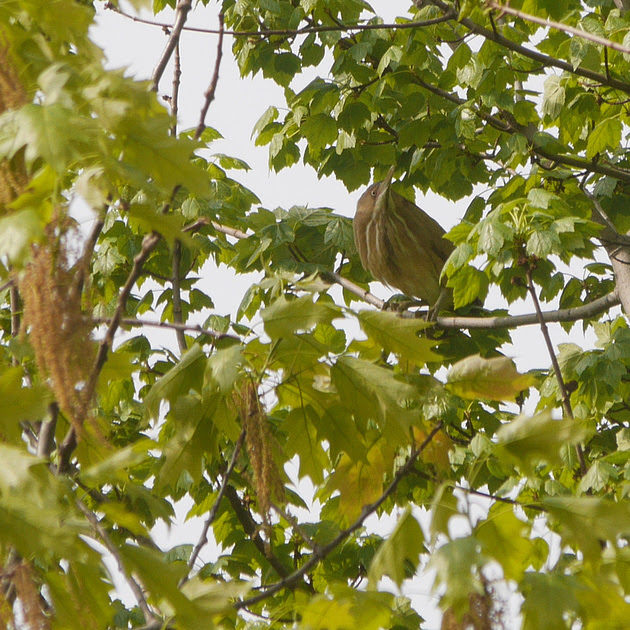 Least but not last

On Sunday, a Least Bittern was spotted perched high up in a tree over the Gill in the Ramble in Central Park. This small egret is very unusual in this area. I asked long-time bird photographer Peter Post if there had ever been one in Central Park before. He said he had seen one--sixty years ago! 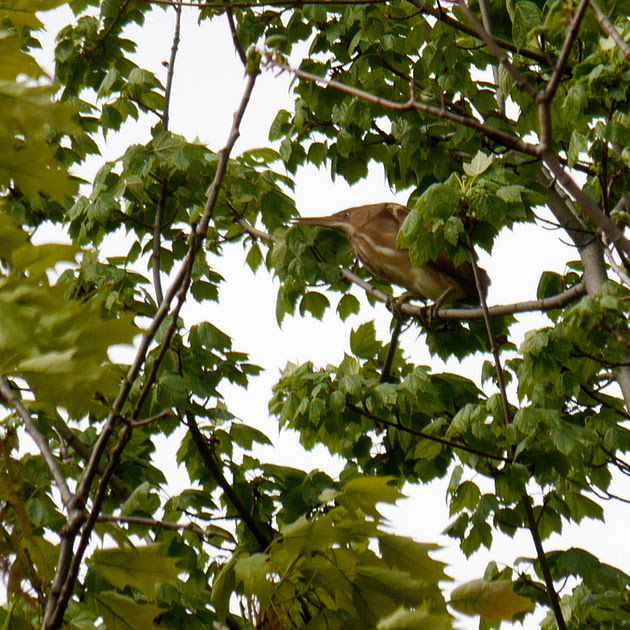 There appears to have been one since then, seen by legendary bird guide Starr Sapphire in 1989. But anyway, wow.

Up a tree, by the way, is not where you'd expect to find such a bird. It would like t be down in the tall reeds at the edge of a pond or stream with some tasty fish in it. Alas, reeds are in short supply in Central Park these days. I suspect the bird was waiting for dusk--if all the large mammals would just go away, it would chance a fishing expedition at Azalea Pond.

Anyway, you never know what might turn up in Manhattan.
Posted by ed g. at 10:05 PM No comments: