Sorry about the long silence. I've been a bit under the weather. I did manage to get up to Inwood Hill Park on Saturday, looking for some Canvasback ducks reported by Nathan O'Reilly. I found two drakes in a little pond in the ice just off the tip of the promontory that helps form the main cove along Spuyten Duyvil Creek. 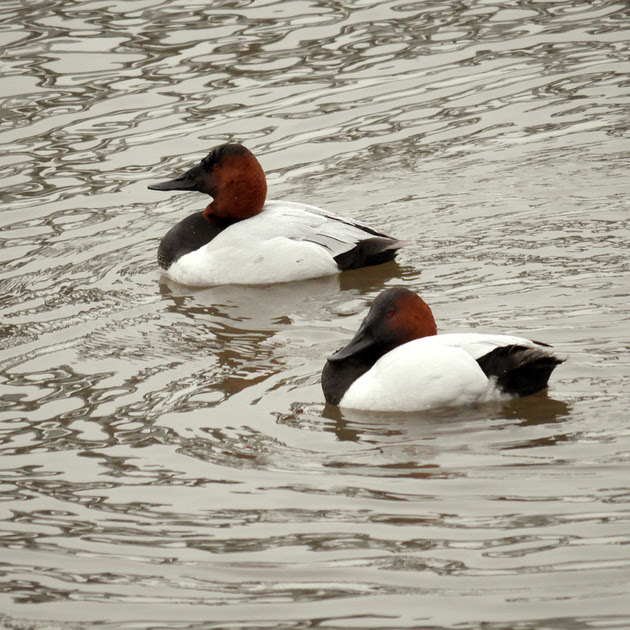 They were quite contentedly diving for food and preening between dives. The creek was solid ice starting just west of the little ice-pond. Out on the ice I saw a Great Black-Backed Gull take a partly-eaten fish away from a juvenile Herring Gull. On the shore, a Double-Crested Cormorant rested. 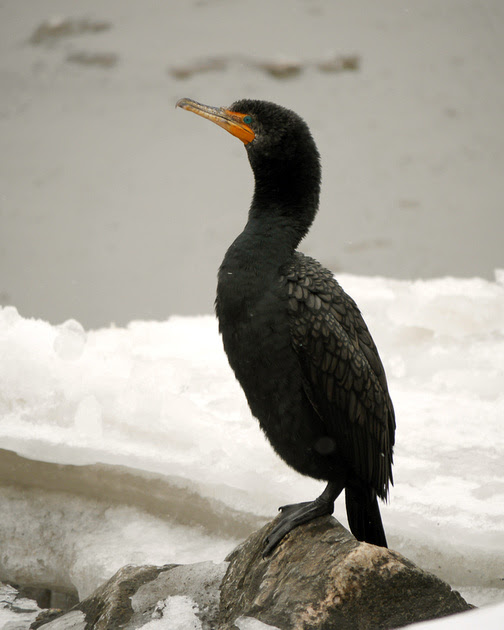 As I watched, snowflakes began drifting down, and then suddenly it was snowing quite heavily. I decided I wasn't quite up to hiking over the hill to get to the Hudson. Still, it was a nice outing.
Posted by ed g. at 12:51 AM No comments: 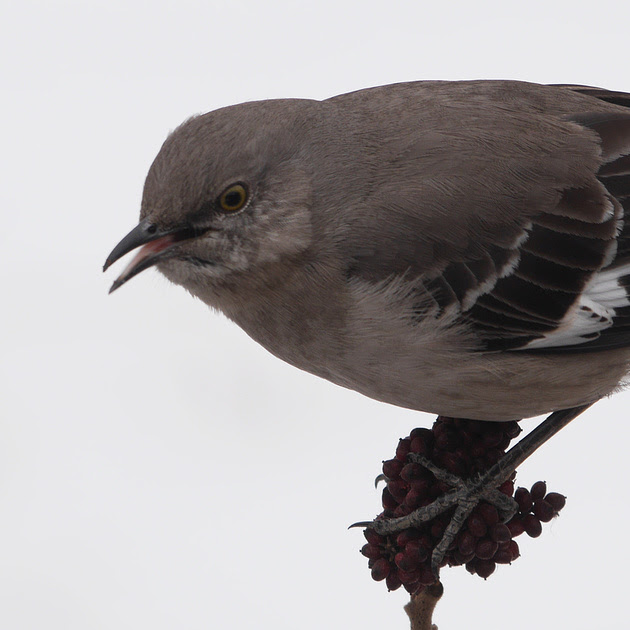 The weather forecast for Saturday was pretty nice, so I went off to Randall's Island to look for the American Pipit that had been reported at the Little Hell Gate salt marsh a couple of days previous.

The paths were in even worse shape than I had expected, but I slogged through the snow and ice. As I crossed the footbridge, I was visited by a very confiding Mockingbird, who popped up to forage several times as I crossed. 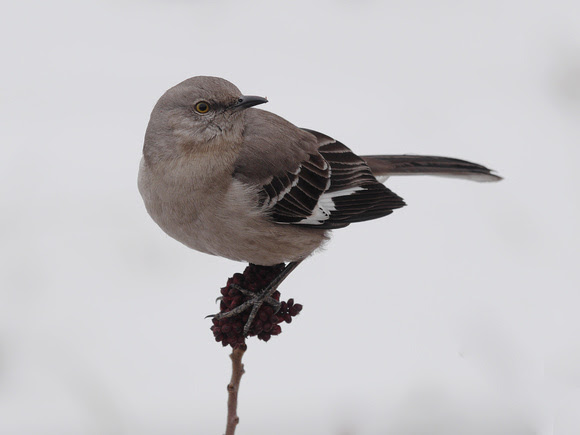 Then it began to snow. It snowed, thick and fast, for the next hour and a half.

On the southeast corner of the marsh, the path runs partly under the approach roadway for the actual Hell Gate Bridge. There, s mixed flock of sparrows foraged on a pile of sand, occasionally flushing to the bushes at the edge of the marsh. 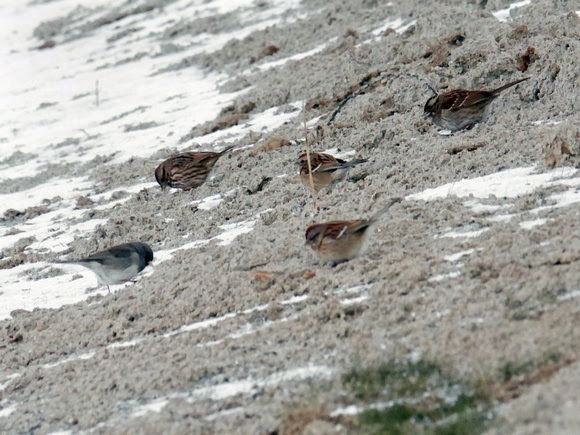 The flock was about half Juncos, and most the rest were White-Throated sparrow. There were three or four American Tree Sparrows, a couple of Song Sparrows, and a Swamp Sparrow. Associating loosely with the sparrows were a pair of Cardinals, and a Yellow-Rumped Warbler. Yellow-Rumped Warblers are known to winter at this latitude, and in fact eBird doesn't flag winter reports of them as unusual. But I always wonder what such a bird is thinking:

"New York will be balmy, he said. Global warming, he said. Probably never get much below freezing, he said. Hardly any snow these days, he said. That moron. And I believed him. I gotta get a new travel agent."

Anyway, after watching the flock for a while--the warbler always flushed to a tree on the opposite side of the road from the bushes the sparrows went to; I have no idea where the Cardinals went--I moved on up the northeast shore. The paths were actually sholveled there--probably has to do with the golf center and Icahn Stadium being along that stretch.

A flock of a hundred or so Canada Geese was swimming up the river in a long loose line. Snow was accumulating on their backs. It was tempting to laugh about the silly geese not seeking shelter or even flapping to get the snow off. But then I thought, what exactly was I doing, anyway? 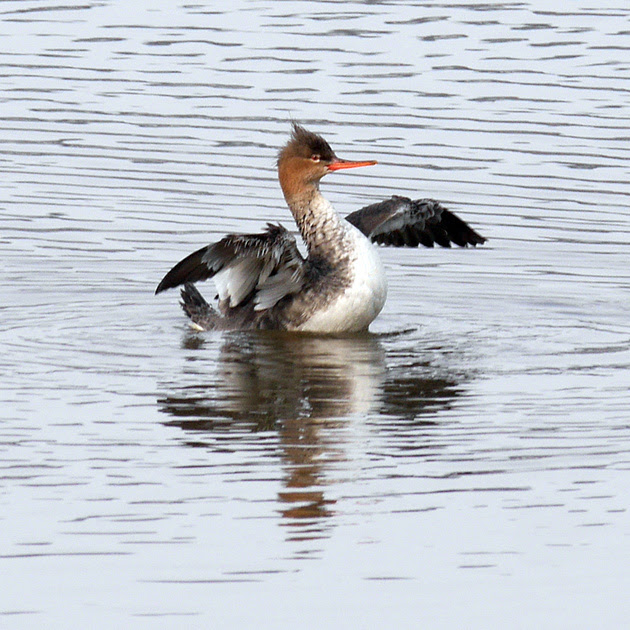 Here's a few photos from my Sunday jaunts in the parks. The Red-Breasted Merganser above was preening in the river, and I caught her at a good angle. 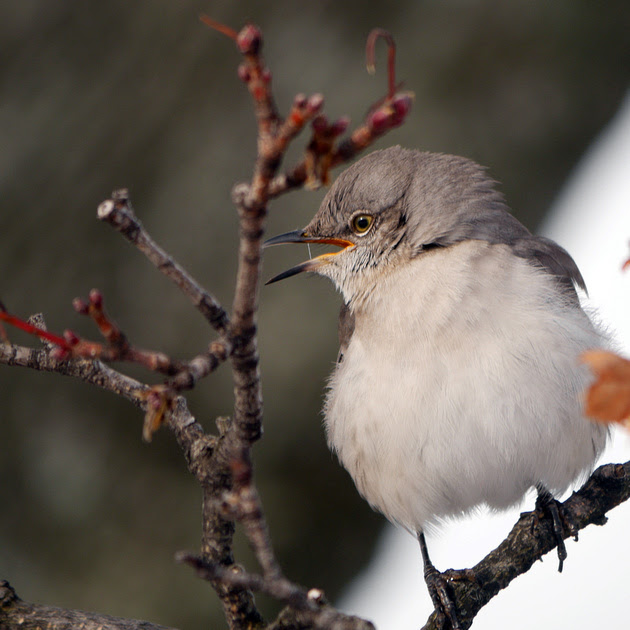 listen to the Mockingbird

This Mockingbird--one of a half-dozen I saw on the river walk north of Dyckman Street--was giving a rusty little call in a bush by the river, and a Song Sparrow sang in a tree nearby. 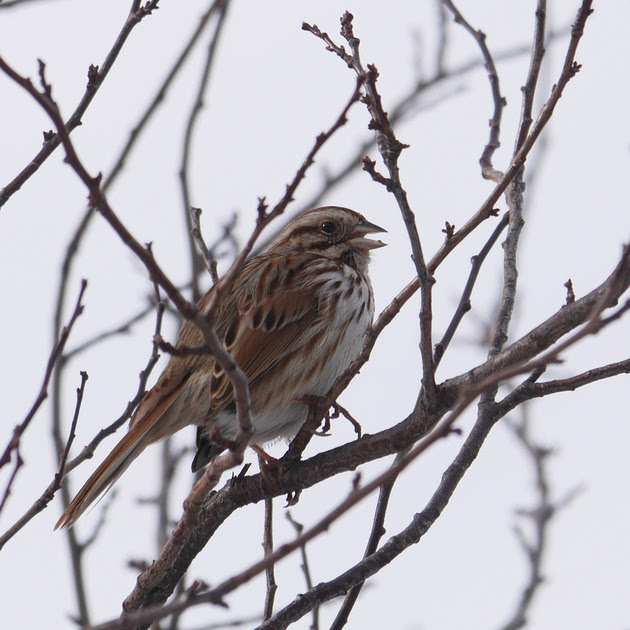 The last two photos didn't quite fit in earlier posts. The Common Redpoll--who is still in Central Park at the Evodia feeders--gets along OK with the Goldfinches. 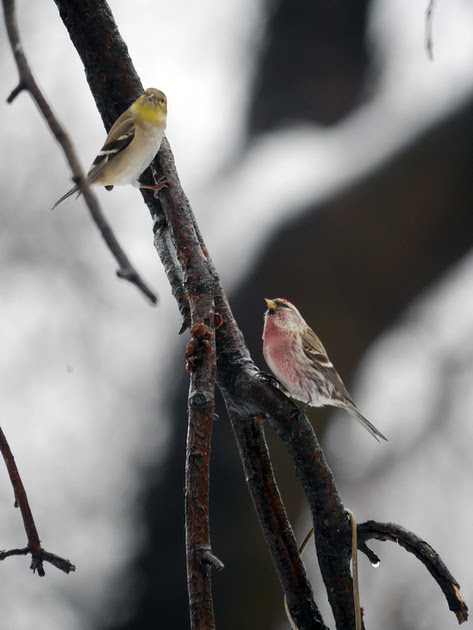 The Chipping Sparrow is still around as well. 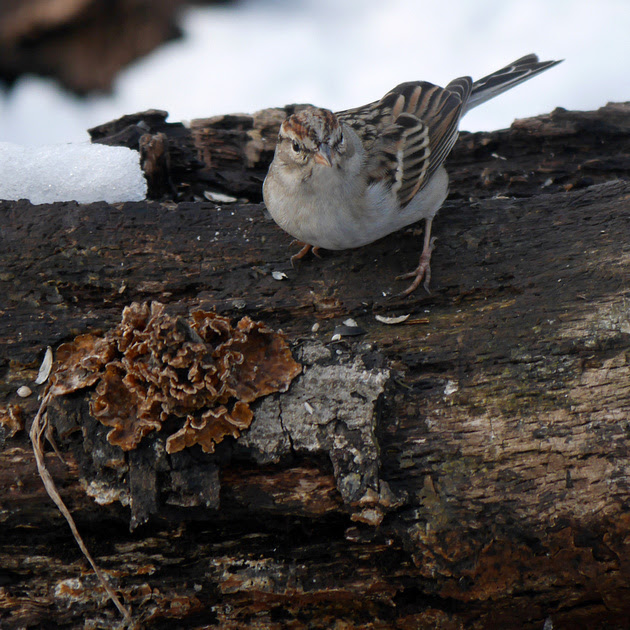 Chipping Sparrow and fungus
Posted by ed g. at 10:49 PM No comments:

Sunday, I went to Riverdale to take my aunt out to lunch, and on the way I stopped for an hour's birding in Inwood Hill Park, where I ran into my first American Tree Sparrow of the year. 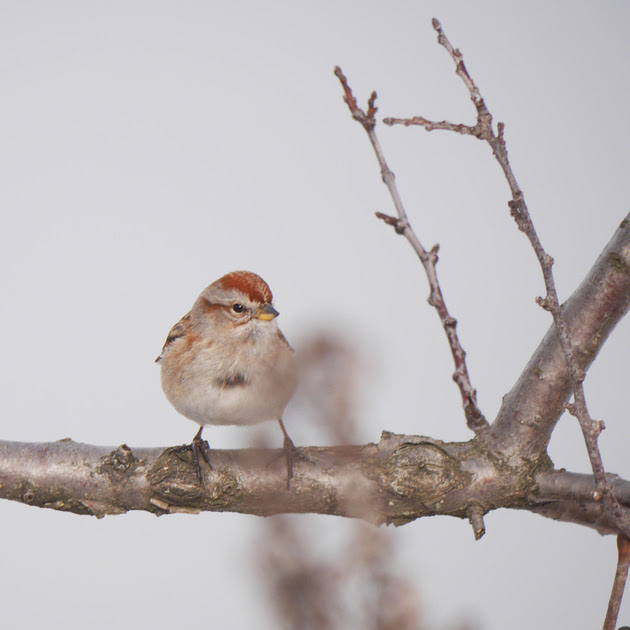 On the way home, I went across Central Park. Entering the Ramble, I ran into Adrian Burke, who told me there was a Red-Shouldered Hawk "just west of the Oven". We don't get to see those all that often in the City. At Mugger's Woods in the Ramble, I saw a big lump high in a tree, and it turned out to be this: 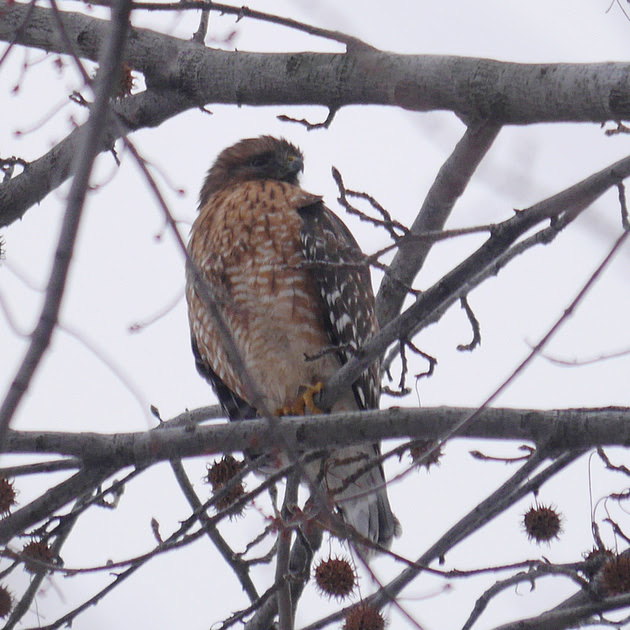 rare visitor
...a Red-Shouldered Hawk. He flew off, roughly in the direction of the Oven, and I wound up tracking him through the Ramble. 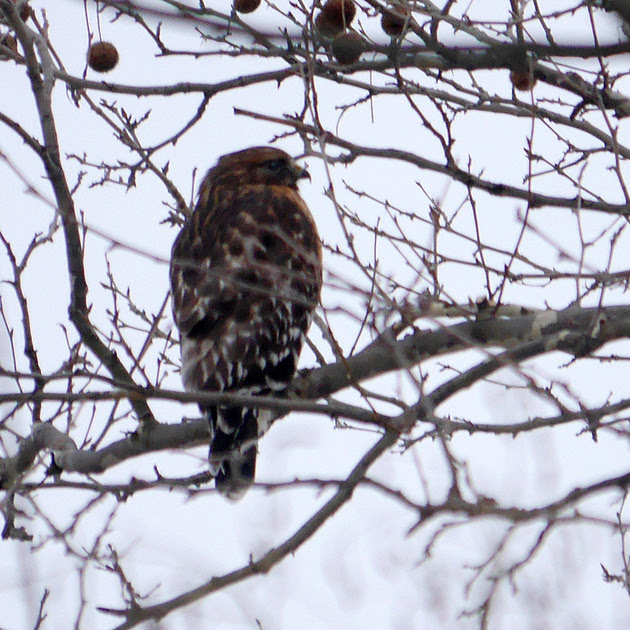 Red shoulder, see?
Now here's the funny thing. When I got to the Oven, Bruce Yolton was there with his camera set up, its enormous lens trained on a hawk in a tree just west of the Oven--well, a few steps down the path to the Riviera. "What the heck is this bird?" he asked me and another birder. 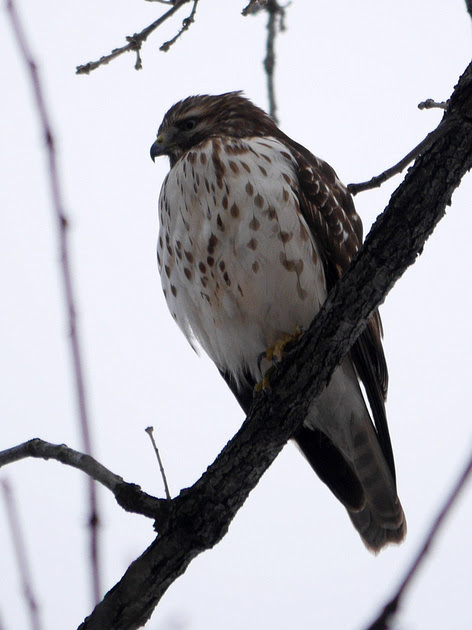 Mystery hawk
What, indeed? We couldn't quite figure it out. Clearly a Buteo by shape, but that isn't the belly band of a Red-Tail, and that tail is quite long for a Buteo (though too short for an Accipiter), and the banding is faint with thick dark bands, not the many thin bold bands of a juvenile Red-Tailed. 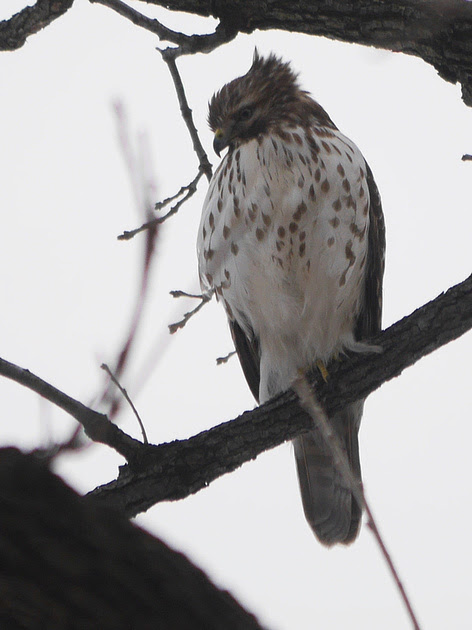 another view of a mystery
Aside from the shape and tail length, when it flew out, it used not the flap-flap-glide style of an Accipiter but the fast steady strokes of, well, a Red-Shouldered Hawk.

So I think this may be an immature-plumage Red-Shouldered. If I'm right, two Red-Shouldered Hawks in Central Park at once is amazing.