One of the nice things about living and working in New York City is that when the rare birds show up, they're usually not far away. This month, I had a couple of opportunities to see excellent birds on my lunch hour. 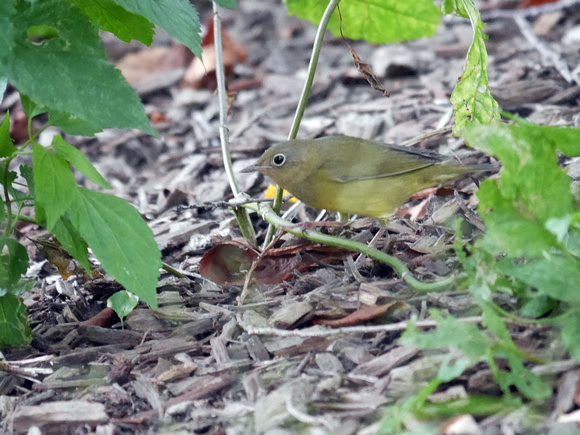 cooperative Connecticut
September 6, there was a report in the morning of a Connecticut Warbler in Central Park, near the Pilgrim statue on 72nd Street. So I decided that it was a good opportunity for a quick "twitch" (originally British slang; a trip made specifically to follow a report of a rare bird). I took the Madison Avenue bus up and walked along the 72nd Street Transverse until I spotted people peering into low shrubs on a the little hill below the statue. 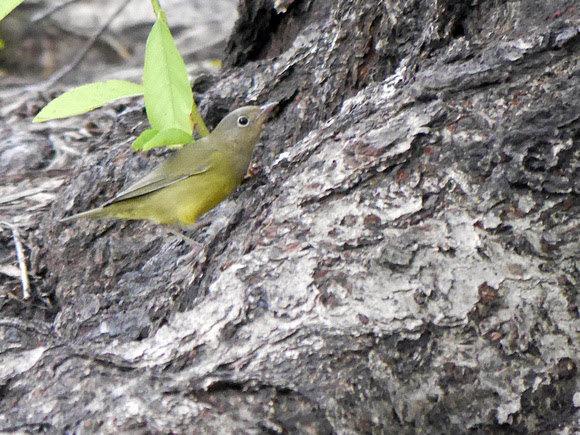 not actually going to perch in the tree, mind you
Here is a thing I've learned: if you're looking for a skulky ground-hugging bird on a hill, try to get below it. It will be easier to spot looking uphill than down (where all the vegetation will screen the bird from you).

It worked this time. It wasn't long before I spotted the Connecticut walking around in the shrubbery. This was a very cooperative bird (for a Connecticut), and he spent some time in the open. All in all, twenty minutes on the bus, a half-hour looking at the bird, twenty back downtown--I was back at my desk practically before anyone noticed I was missing. 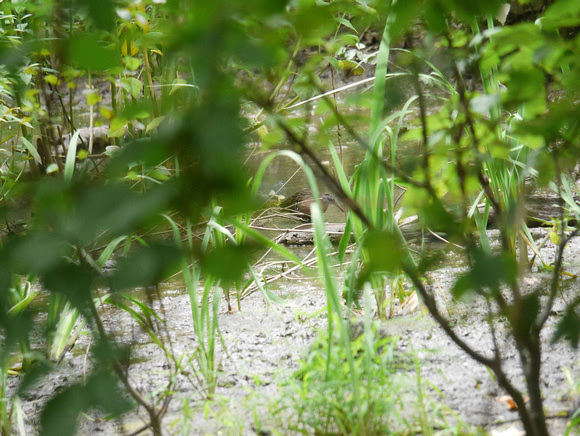 spot the birdie
A few days later, a report of a Virginal Rail drew me out again. Usually, when that species is spotted in Central park, it's because one ran into trouble and was treated by the Wild Bird Fund, and after rehab,released in the park. Under The Official Rules, you're not supposed to count such a released bird. So there were apparently frantic calls to the rehabbers--who reported that they had not released a Virginia Rail, and there was much rejoicing.

Even better, this normally reclusive bird was right out in the open in a spot (the bridge where the Gill empties into the Lake, which will only mean anything to Central Park regulars) offering great close views. 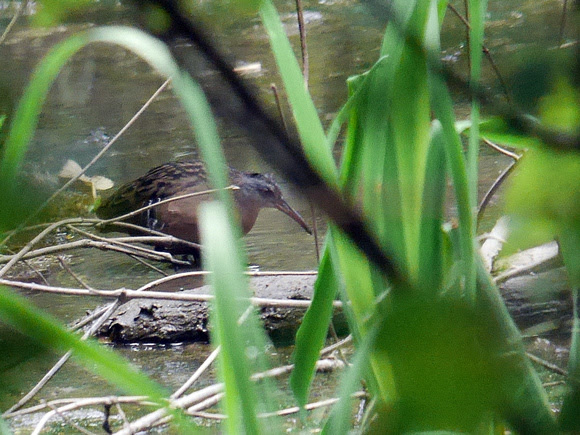 oh, there you are!
Anyway, I had some adventures getting to the spot this time--wound up walking from 68th and Park to about 77th in the middle of the park--and the bird was gone by the time I got there. Woe and despair! I searched for a half-hour, and decided I needed ti get back to work. As I was deciding what the best way of getting back might be, I looked at Twitter and found that the excellent birder Steve Chang had re-found the rail nearby, at a little pond (more of a big puddle) in the area called called the Swampy Pin Oak.

I hustled over there, and in the shadows of the sheltered pond, was able to spot the rail. I got a life bird on my lunch hour, a very successful twitch. I wasn't even that late getting back to work.
Posted by ed g. at 10:07 PM No comments: 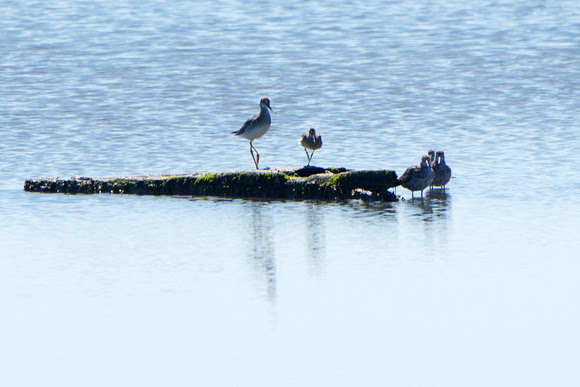 a cozy scene
I'm not good at identifying shorebirds. That's natural; before this year, I never really looked at them much. I saw the few that showed up at Inwood Hill Park or on Randall's Island, but those few are pretty easy to ID. When I started going to Jamaica Bay, things got harder.

At the end of August, I birded the north end of Jamaica Bay's East Pond for the first time. That's where most of teh interesting reports come from, and I've had some trouble figuring out what I saw. So, I'm hoping some of my readers can help me our with a couple of problems.

Now, not all of the birds new to me were hard to ID. White-Rumped Sandpiper, for example. I had intended to go down the west side of the pond, because that's where the easiest footing is. Instead, I missed the path, and wound up in the northeast corner of the pond, which is identified on the maps as the "North Muck".

Well, yeah, it was muddy. But I managed to get down through the reeds to a place where I could see a bit of the shore. There were some small sandpipers there, that seemed a bit larger than the Least and Semipalmated peeps I knew. I wondered if they might be White-Rumped, and I tried to edge myself into a a better position to see them.

That's when I stepped into about 6 inches of very soft mud. I tried to pull my foot out, lost my balance, and wentdown with a loud squishy sound. The peeps flushed, and as the flew off, I could clearly see their white backsides. ID confirmed.

After extracting myself from the embrace of the earth, I made my way back to teh solider western edge of the pond, a little beach of wet sand. There I saw the cozy scene at the top of this post. I thought it was a nice photo; I also thought it was a Greater Yellowlegs on the left, a Dowitcher (probably Short-Billed) next to it, and...what the heck were those birds in the water off the right end of that log?

Yellowlegs, Dowitcher, and ...?
They're pretty bulky. Their bodies seem about the same size as the Yellowlegs. Watching them, I had no clue at all what they might be. Sitting with my field guides at home, I still have no real idea. Could they be Willets? They're supposed to be kind of bulky and dumpy.

Here's a shot where the mystery birds are in profile (and another Dowitcher has showed up). 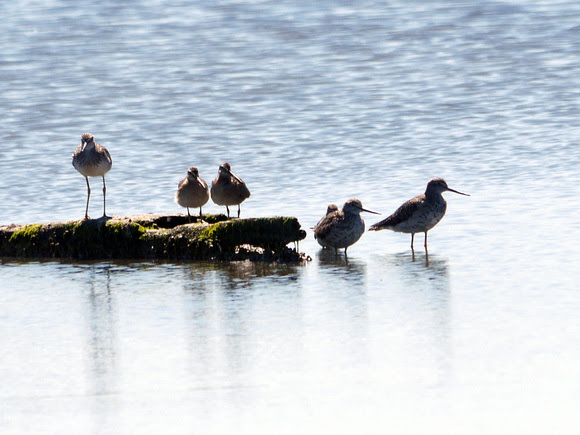 Hope I got their good side
Any ideas?

At least with those birds, I knew I didn't know what I was looking at. This next one is a little embarrassing. I saw this group of three just hanging out, not feeding actively: 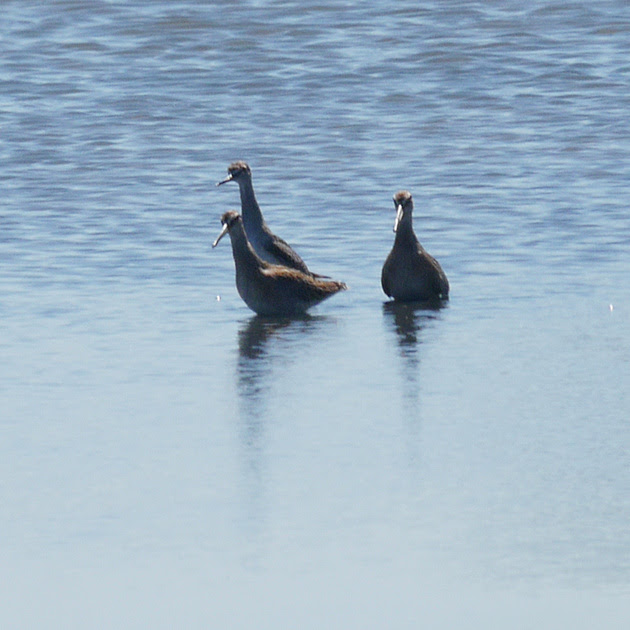 the Three Amigos
and I said "OK, those are more Dowitchers". There were Dowitchers all over the place that day. I actually knew them the first time I saw them (on my previous trip) because of their feeding style--"like a sewing machine", just like it says in Peterson. Anyway, I think they were all Short-Billed, because that's what people had been seeing at the East Pond. 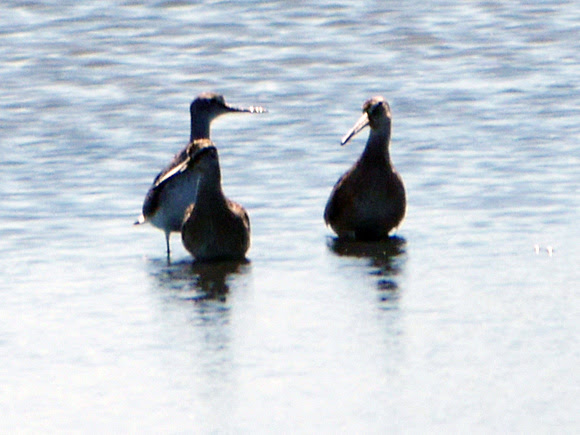 one of these bills is not like the others
It wasn't until I got home and looked at my photos that I realized something was off. One of these birds has a shorter bill, and stands a little taller in the water. I think that's a Stilt Sandpiper. Here's another shot of them: 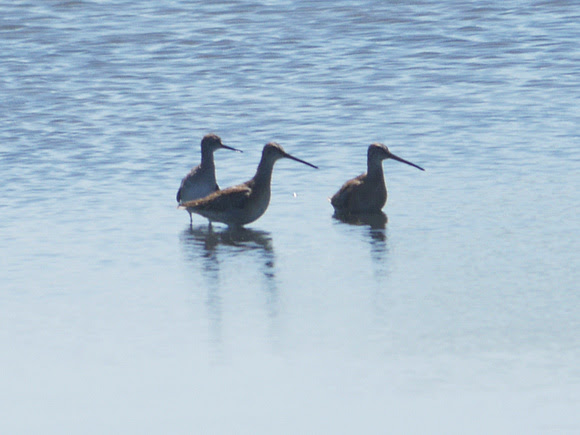 quite companionable
I really, really should have noticed those differences while I was watching them. Clearly my observational skills aren't what they should be. Anyway, what do you think?

I did definitely see some Stilt Sandpipers later, feeding actively near more Dowitchers. They were easier to tell in action--the long legs and shorter bills bean their butts tilt way up in the air when they bend down to feed; Dowitchers stay more horizontal. (right?) So I noticed that, at least.

I didn't go too far down the shore--I saw that map called the next inward bend "Dead man's Cove". Since the "North Muck" had been so exactly right, I thought it was better not to test it.

Any help will be gratefully received.
Posted by ed g. at 12:14 AM No comments: