I work across the street from St Bartholomew's Church, which is in midtown Manhattan on Park Avenue. It has a tiny garden which attracts a number of migrants (and which I've written about once before). Recently I saw a couple of new species in the park--rather late in the afternoon both times, so I didn't get any usable photos; I;m going to use that as an excuse to post some old ones. I saw a dark shape walking by the wall of the church. It was too large for an Ovenbird (which I've seen there once or twice this Fall), but I couldn't imagine a pigeon skulking in the shrubs like that. I went around to the church steps, where you can look down into the garden, and found a Woodcock sitting under an evergreen shrub.

It was an interesting vantage point. The bird was facing straight away from me--I was behind and above it, but it's eyes are so placed that it was staring right up at me. It's a startling thing to see up close. They really do have eyes in the back of their head. 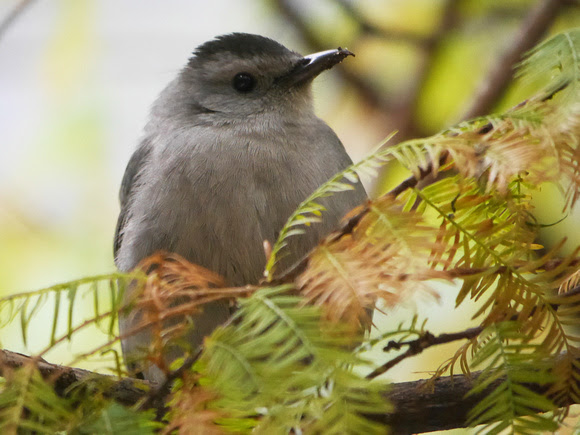 There were a pair of Gray Catbirds in the garden for a while. Last year, one catbird overwintered. However a couple of weeks back, I spotted a Brown Thrasher in the garden at dusk, and both it and the catbirds seemed agitated--the Thrasher was flitting in and out of the shrubs, and the catbirds were sitting in the tree above them and calling loudly. The next day, they had all gone. It's a mystery. 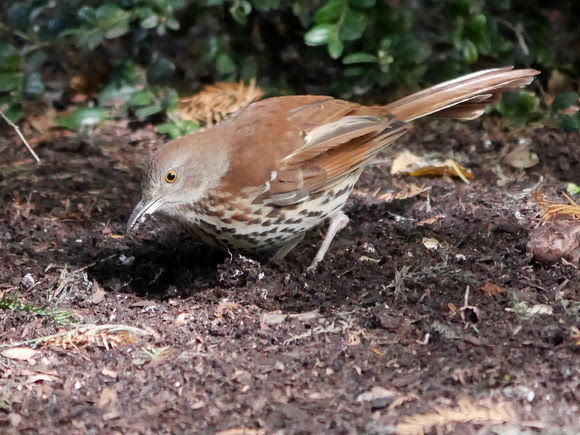 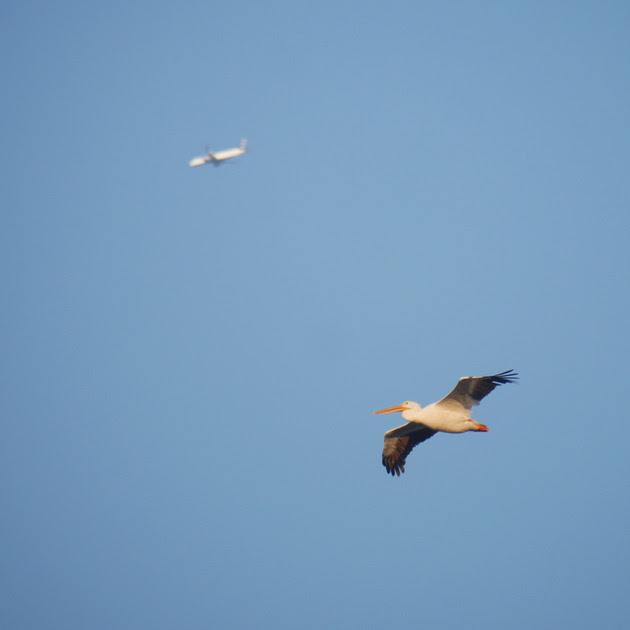 large flying things
I was at Jamaica Bay a few weeks ago looking for the American Avocet that spent a long time at the East Pond. I didn't find it that day, but near sunset, I took a last look from the overlook near Big John's Pond. There was nothing exciting on the water, but when I looked overhead, I saw a huge white bird flying south.

It was already past me when I spotted it, but I got my binoculars up and say it was an American White Pelican. I thought I wouldn't be able to get a decent photo, but luckily it turned at the south end of the pond and flew back toward the north, and I got some good flight shots of it.

The American White Pelican is mostly a western bird, though some winter in Florida. We get occasional vagrants; there was even a pair that overwintered at Jamaica Bay in 2015-16. It's probably the best bird I've seen that I didn't know was there beforehand. I'm glad I went for the bins first, by the way. I don't think I would have gotten an identifiable photo if I had grabbed then camera first. The view in the binoculars was good enough that even if the Pelican had kept on going, I would have had an ID. People who say "pics or it didn't happen" can bite me--it just doesn't work that way, not always.

The Pelican was still around the next morning, and several people got to see it. Then it was gone. I finally saw the Avocet a couple of weeks later--a terrible view through the scope, but at least I saw it. (For that matter, it was way out of range for my camera, and I can't seem to get the hang of digiscoping, so I don't have proof that I saw it; see above.)
Posted by ed g. at 4:36 PM No comments: