Waiting for the shorebirds 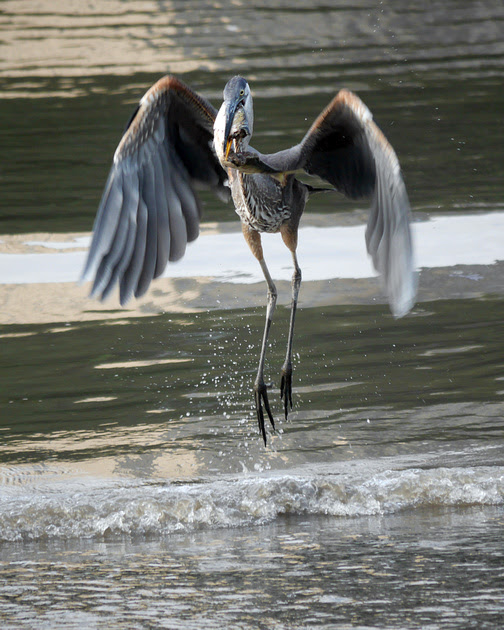 It's the end of July and I'm waiting for the shorebirds to show up. As far as I know, nobody's been seeing much in Manhattan--no sandpipers at all, for one thing. I've read that Jamaica Bay is quite uncharacteristically slow, too--maybe the migrating shorebirds are avoiding the whole area.

I was up at Inwood Hill Park the other weekend, and although there were no sandpipers or plovers, there were a few birds of the heron family, including my first Great Blue Heron of the year in Manhattan--two of them actually, hunting quite successfully in the coves. 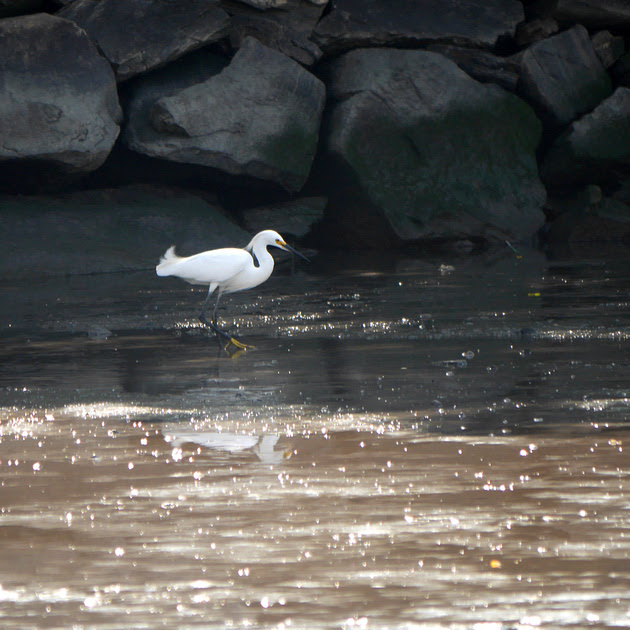 There were also at least one Snowy Egret, and a Great Egret. All nice to see, but I'm still waiting for my peeps. 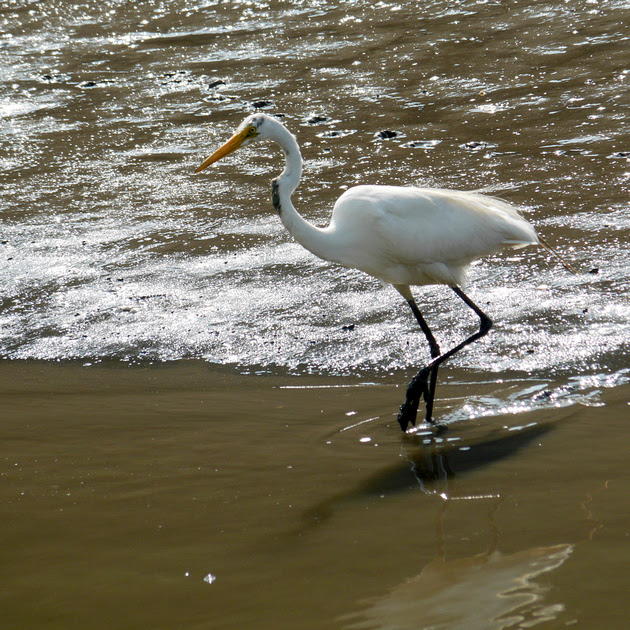 There's been a lot of stuff happening. Here's a quick rundown: 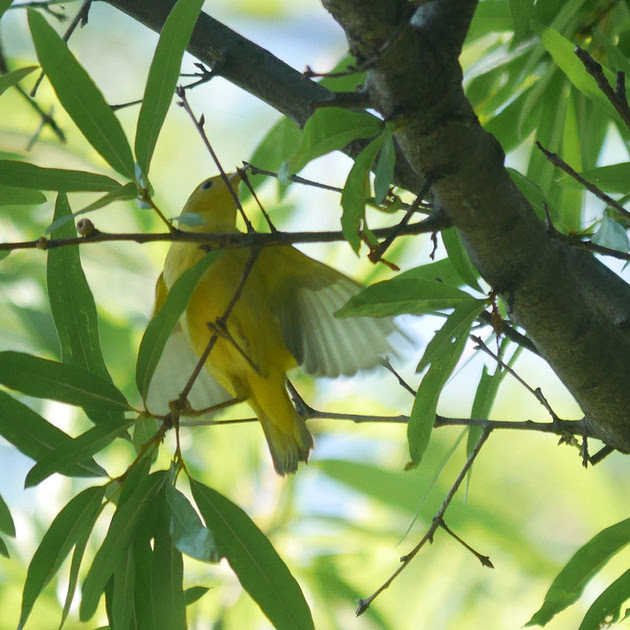 first warbler of the Fall

I had my first warbler of the Fall migration season on Wednesday, A Yellow Warbler calling constantly and foraging in the trees beside the dock at Turtle Pond.

Also at Turtle Pond, a pair Kingbirds had nested above the dock, but I haven't seen any signs of fledglings, and today Junko Suzuki notices that they seemed to gathering more nesting material. I saw that as well, after she pointed it out. Do Kingbirds ever re-nest if they've had a nesting failure, or start a second brood after fledging the first? I've read that they only ever have one brood. 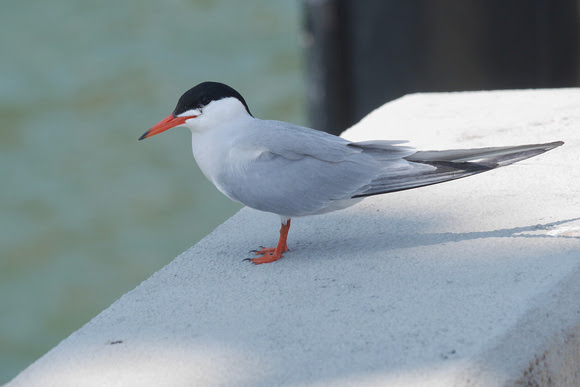 Elena and I went to Governor's Island on Sunday for the Audubon Tern Festival. It was too hot for us to do any of the bird walks, but we did have a nice look at the colony on Yankee Pier. 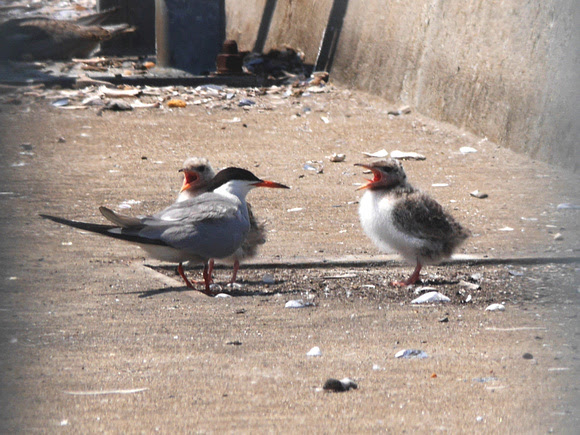 The fledgling terns are coming along nicely. Terns will re-nest if there's a problem with their first batch of eggs, so the baby terns range from these fuzzy globular chicks to well-plumaged adolescents.

Man, are they all noisy. 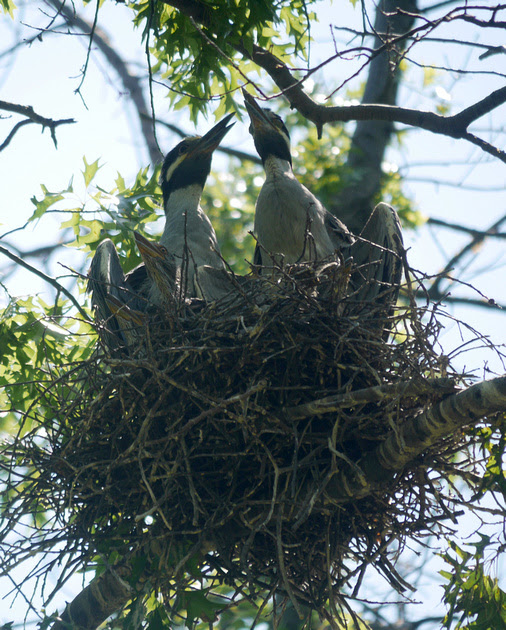 The Yellow-Crowned Night Heron nest on Governors Island has not just one, not two, not three, but four baby birds in it (you can see three in that photo). It was a 90-degree day, and the parents and nestlings were visibly panting. I had the impression that the adults were mostly standing there to shade the young ones.

They're about three weeks old (Ben Cacace first saw a nestling on July 2, and it was not more than a couple of days old at that point). They are supposed to take 30 to 42 days to leave the nest, so we're looking at the very end of July or the first week or two of August for the fledging.

There's also a second nest on the island--I don't know where, exactly--but the reports sound like the same male might be responsible for both. I have not heard about any nestlings there.

Also on Governors Island, we saw a large number of Brown Cowbirds, none of them adult males; many seemed to be juveniles to my eyes. Anyone know what's up with that?

Margaret Morse Nice, The Watcher at the Nest 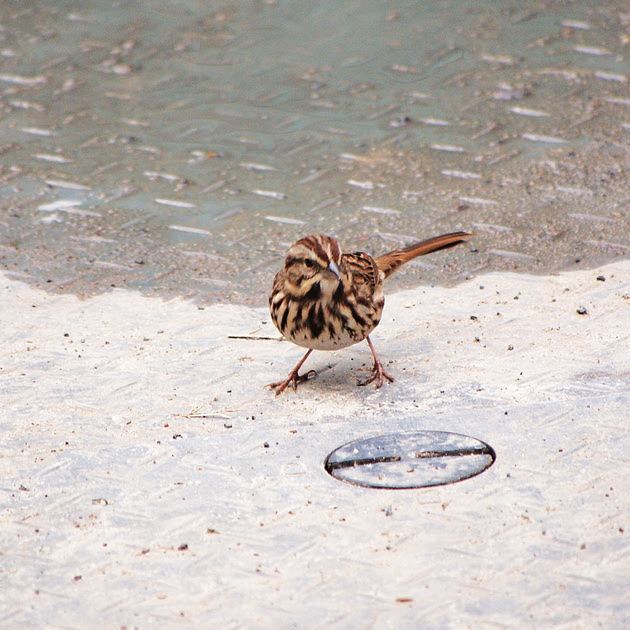 Song Sparrow, Bryant Park
Every year, we go to a speculative literature convention near Boston called Readercon, driven up by friends who are also birders. This year's Readercon was last weekend, and as always we got a little birdwatching in on the trip, and I'll have a post about that soon. But while at the con, we went to dinner at a little Korean BBQ place, next door to which is a used book superstore called Used Book Superstore. Well, of course we went there. What do you take us for?

So I picked up a battered copy of a little book called The Watcher at the Nest, which would be a good title for a horror novel but is actually about Song Sparrows. The author, Margaret Morse Nice, pioneered life-history studies of birds in an era that was mostly concerned with finding and cataloging species. The Wilson Ornithological Society gives an award in her honor.

This very charming book is an account of her observations of the Song Sparrows who nested near her home in Columbus, Ohio during the eight years she lived there. Here's her description of the life of a male Song Sparrow dealing with the stress of nesting season with one brood just fledged and a nest full of eggs for the second batch:

Life for the Song Sparrow husband and father in the midst of the nesting season is a complicated affair at best; he has an incubating wife to protect, troublesome neighbors to watch, a brood of young hopefuls to feed, and his own living to get, not to mention keeping himself and his family out of the clutches of prowling enemies. The reason that he can successfully cope with such a multiplicity of details is that he does one thing at a time with all his might, and in the next minute, perhaps, turns his whole attention to something else.

That's an approach worth considering for all of us.

Nice's work in Columbus resulted in an immense two-volume study Studies in the life history of the Song Sparrow. I need to read that, I think; also her biography Research is a passion with me.

Nice called the area "Interpont" because it was between two bridges, and thanks to an excellent post at a blog called Bee's First Appearance, I found the location on Google Maps and then found an eBird hotspot for Tuttle Park, which is basically exactly the area she explored.

It's pretty decently birdy there, still. On an image search it seems a bit more manicured than Margaret Morse Nice would have liked:

Weeds were one of the glories of Interpont--the giant ragweeds that towered above one's head, the thistles that offered snug homes to Goldfinches, the incredible cow parsnips in May, the asters and goldenrods that wove bright patterns along the ditches. Despised by many, weeds are in reality an important element in our landscape, holding the precious soil, providing nesting places for many birds, extending hospitality to migrating hosts of native sparrows that find upon them a harvest of insects, and finally affording food and shelter to those hardy birds that brave the northern winter, Let us therefore leave weeds and shrubs and tangled vines wherever we can along roadsides and fence rows, for where such things are, there will birds be also.

In early Summer, the migration is over, and the main points of interest are the nesting birds. There are twenty or so species nesting in Central Park. In early June, my attention was held by the Warbling Vireo nest I mentioned in an earlier post. 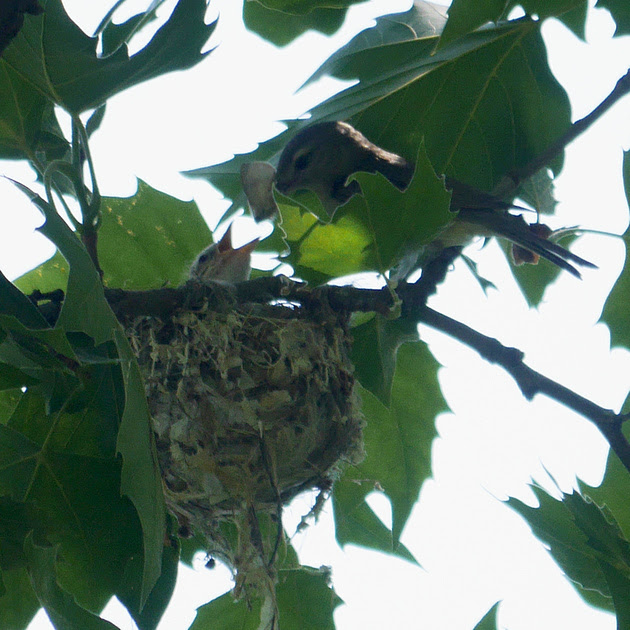 That's one of the probably three nestlings getting what looks like a whole moth all his own, just a couple of days before they fledged. They did it on a weekend I was away, and a week before I thought it would happen. The nest must have been there well before I first saw it.

Right after the Vireos, I noticed a Baltimore Oriole nest near the bathrooms in the Ramble. This photo, too, was only a day or so before fledging. I don't know how I missed this very obvious nest right over the path, but I didn't see it until I was standing under another tree nearby and Mama Oriole came out and scolded me. 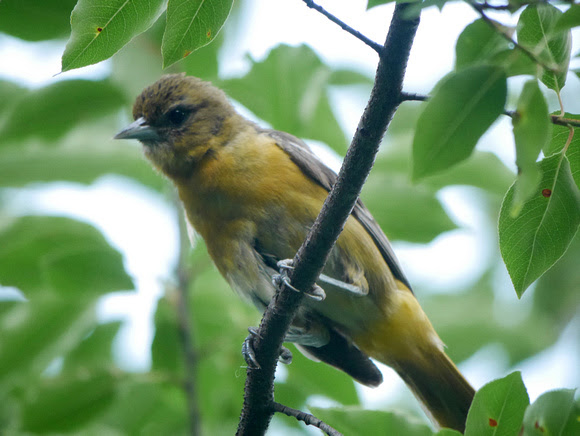 She didn't like anyone anywhere near her nest tree.

One species that has had a hard time nesting in the Park lately is the Canada Goose. The Central Park Conservancy has been on a goose eradication campaign for some years, which has included paying "experts" to go and oil or break eggs and destroy nests. 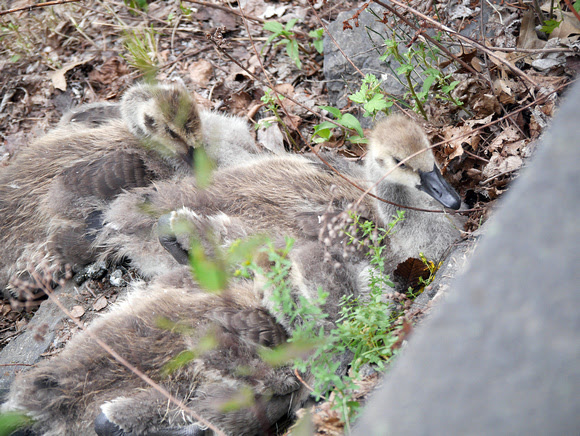 Despite the efforts of the Goosestapo, one or two pairs do manage to breed every year. I found these lazy half-grown goslings hanging out at the edge of the Reservoir the other week.

On the other hand, everybody loves ducklings. Remember the gang of young Mallards at Turtle Pond that I posted a photo of some time back? They're growing into fine young ducks. 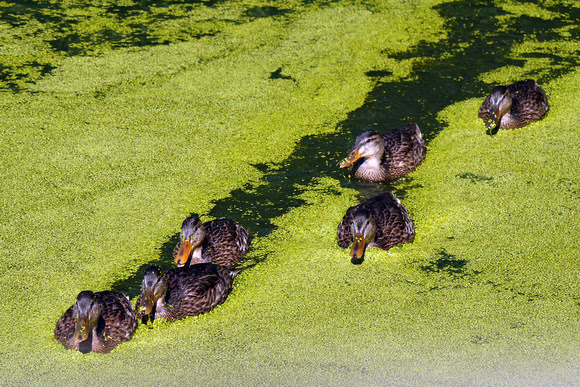 At least the survivors are, anyway. There were ten originally, and it looks like four have been taken by predators. But not to worry, right after I took this picture, I saw this: 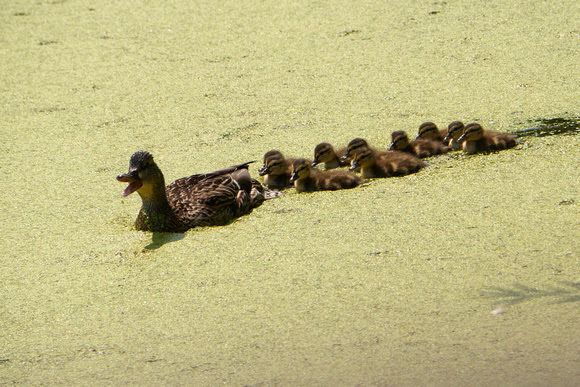 Elsewhere, the various Red-Tailed Hawk nests have fledged, Ben Cacace reports that the Yellow-Crowned Night Heron on Governor's island has thatched, and I see from photos online that the young Common Terns are doing well.