To return to Florida once more, the best thing about the Green Cay wetlands park is that the birds were often right up close to the boardwalk--sometimes even on it, like this Tricolored Heron. And also the territorial Limpkin I mentioned in my first Florida post: Those birds had no real fear of people.

We made two trips to Green Cay. On Presidents' Day we had wanted to see the nearby Wakodahatchee park, another man-made wetlands area somewhat older than Green Cay, but it has very little parking (Probably better to try it on a non-holiday weekday). Since rain was threatening, we decided not to wait and headed back to the more capacious Green Cay.

The rains did come while we were there, sometimes quite heavily, though many of the birds weren't bothered much by it, especially the waders. You can see some rain in the Tricolored Heron photos. Smaller birds avoided the rain more, but even some of the Grackles stayed out in the open.

When the rain stopped, they all came back out. Here's a tree full of Grackles in the clearing storm: There were some very visible large nests near the boardwalks, including this Great Blue Heron nest: And a coupel of trees right next to that had several Anhinga nests. There were a lot of Anhingas. I didn't see any come up on the boardwalks, but they got pretty close. I like this subadult, who looked very punk. Their feet are pretty amazing: I still can't believe how close the American Bitterns got to the boardwalk. Aren't they supposed to be really skittish?

The Spoonbills were a bit more standoffish, but still pretty close.

And here's one more Tricolored Heron portrait to finish off: And that's it for Florida. I'll be back soon with Spring's early arrivals here in New York City.
Posted by ed g. at 3:11 PM No comments:

Taking a short break from the Florida posts to talk about a goose that turned up on the Central Park Reservoir in Mid-February, and is still there. It was found by Peter Post, who identified it as a Cackling Goose, and then later reviewed his photos and thought it might be a Lesser Canada Goose, and then things went down.

[] Goose
So, Canada Geese used to be easy. Big brown goose, black neck and head, white cheek patch--you know, Canada Goose. Branta canadensis, in the scientific lingo. There were a bunch of subspecies--more-or-less isolated populations, the ones who bred in the far north generally smaller--but those were pretty esoteric for most birders.

About a decade ago, the ornithologists decided that some of those smaller northerly subspecies were in fact a separate species, the Cackling Goose. (Branta hutchinsii, for those of you keeping score at home.) So now there's two species, each with several subspecies, and it's quite hard to tell which is which. So now if a birder is looking at a small white-cheeked goose, they have a problem.

Anyway, Cackling Goose is a fairly unusual visitor in this area--there was some excitement about the one that showed up in Flushing Meadow Park in January--but a Lesser Canada is almost unheard of. In fact, some prominent voices on the NY State Birds mailing list said there was "zero percent chance" of it being a Lesser Canada. Apparently, the Lesser Canada Goose _never_ shows up this far East. And we know his because it never has before. And we know that because any similar goose that does come around here isn't a Lesser Canada, but some other goose, because Lesser Canada Geese never occur here. See?

The email exchanges went on,some in the stiffly polite manner that the scientifically-inclined use when they're losing their tempers. So a couple of days later I went to see the goose. It took a while to find it, just because i had to walk most of the way around the Reservoir before I ran into the particular flock of Canada Geese it was hanging around with, but when I found them, it stood out a mile.

picking him out of a lineup
Much smaller than the somewhat smallish Canadas it was with, maybe 2/3 their size or less. Small head, small beak, very short neck, didn't associate closely with the bigger geese--even when it was in the middle of the flock, there was usually a good twenty feet separating it from the nearest other goose. Kind of dark on the "white" areas.

closest approach to a regular Canada Goose
I don't know. It looks like a Cackling Goose to me. But what do I know?

our suspect with a Shoveler, a pretty small duck

...and with a Ruddy Duck, a very small duck
I see on the mailing lists today that the goose is still around, and has been joined on the Reservoir by another very small goose, who is not so brown. So there's excellent opportunities for further dispute. 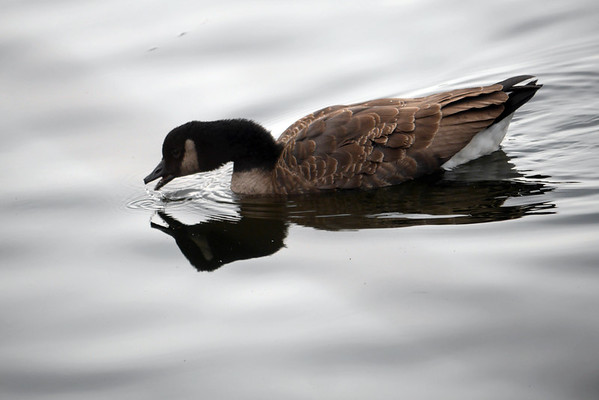 Branta somethingorother
And on twitter, I see a report that the British Ornithologists' Union has added the Lesser Canada Goose to its list of species that have been seen in Britain. Except that what they're calling "Lesser Canada Goose" is B. hutchinsii, what we over on this continent, where they come from, call Cackling Goose. Because why not?
Posted by ed g. at 10:38 PM 1 comment: